The McGill Journal of Political Studies 2012 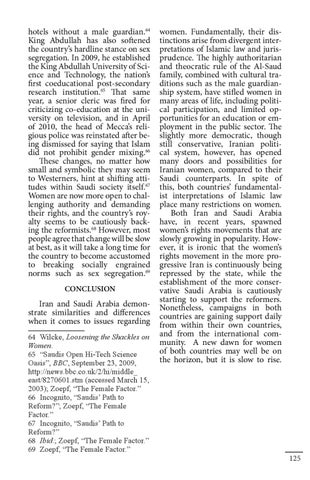 hotels without a male guardian.64 King Abdullah has also softened the country’s hardline stance on sex segregation. In 2009, he established the King Abdullah University of Science and Technology, the nation’s first coeducational post-secondary research institution.65 That same year, a senior cleric was fired for criticizing co-education at the university on television, and in April of 2010, the head of Mecca’s religious police was reinstated after being dismissed for saying that Islam did not prohibit gender mixing.66 These changes, no matter how small and symbolic they may seem to Westerners, hint at shifting attitudes within Saudi society itself.67 Women are now more open to challenging authority and demanding their rights, and the country’s royalty seems to be cautiously backing the reformists.68 However, most people agree that change will be slow at best, as it will take a long time for the country to become accustomed to breaking socially engrained norms such as sex segregation.69 CONCLUSION

women. Fundamentally, their distinctions arise from divergent interpretations of Islamic law and jurisprudence. The highly authoritarian and theocratic rule of the Al-Saud family, combined with cultural traditions such as the male guardianship system, have stifled women in many areas of life, including political participation, and limited opportunities for an education or employment in the public sector. The slightly more democratic, though still conservative, Iranian political system, however, has opened many doors and possibilities for Iranian women, compared to their Saudi counterparts. In spite of this, both countries’ fundamentalist interpretations of Islamic law place many restrictions on women. Both Iran and Saudi Arabia have, in recent years, spawned women’s rights movements that are slowly growing in popularity. However, it is ironic that the women’s rights movement in the more progressive Iran is continuously being repressed by the state, while the establishment of the more conservative Saudi Arabia is cautiously starting to support the reformers. Nonetheless, campaigns in both countries are gaining support daily from within their own countries, and from the international community. A new dawn for women of both countries may well be on the horizon, but it is slow to rise.

The McGill Journal of Political Studies 2012