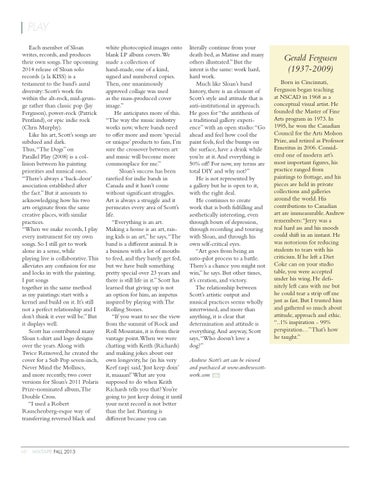 PLAY Each member of Sloan writes, records, and produces their own songs. The upcoming 2014 release of Sloan solo records (a la KISS) is a testament to the band’s aural diversity: Scott’s work fits within the alt-rock, mid-grunge rather than classic pop (Jay Ferguson), power-rock (Patrick Pentland), or epic indie rock (Chris Murphy). Like his art, Scott’s songs are subdued and dark. Thus, “The Dogs” on Parallel Play (2008) is a collision between his painting priorities and musical ones. “There’s always a ‘back-door’ association established after the fact.” But it amounts to acknowledging how his two arts originate from the same creative places, with similar practices. “When we make records, I play every instrument for my own songs. So I still get to work alone in a sense, while playing live is collaborative. This alleviates any confusion for me and locks in with the painting. I put songs together in the same method as my paintings: start with a kernel and build on it. It’s still not a perfect relationship and I don’t think it ever will be.” But it displays well. Scott has contributed many Sloan t-shirt and logo designs over the years. Along with Twice Removed, he created the cover for a Sub Pop seven-inch, Never Mind the Molluscs, and more recently, two cover versions for Sloan’s 2011 Polaris Prize-nominated album, The Double Cross. “I used a Robert Rauschenberg-esque way of transferring reversed black and

white photocopied images onto blank LP album covers. We made a collection of hand-made, one of a kind, signed and numbered copies. Then, one unanimously approved collage was used as the mass-produced cover image.” He anticipates more of this. “The way the music industry works now, where bands need to offer more and more ‘special or unique’ products to fans, I’m sure the crossover between art and music will become more commonplace for me.” Sloan’s success has been rarefied for indie bands in Canada and it hasn’t come without significant struggles. Art is always a struggle and it permeates every area of Scott’s life. “Everything is an art. Making a home is an art, raising kids is an art,” he says, “The band is a different animal. It is a business with a lot of mouths to feed, and they barely get fed, but we have built something pretty special over 23 years and there is still life in it.” Scott has learned that giving up is not an option for him, an impetus inspired by playing with The Rolling Stones. “If you want to see the view from the summit of Rock and Roll Mountain, it is from their vantage point. When we were chatting with Keith (Richards) and making jokes about our own longevity, he (in his very Keef rasp) said, ‘Just keep doin’ it, maaaan!’ What are you supposed to do when Keith Richards tells you that? You’re going to just keep doing it until your next record is not better than the last. Painting is different because you can

literally continue from your death bed, as Matisse and many others illustrated.” But the intent is the same: work hard, hard work. Much like Sloan’s band history, there is an element of Scott’s style and attitude that is anti-institutional in approach. He goes for “the antithesis of a traditional gallery experience” with an open studio: “Go ahead and feel how cool the paint feels, feel the bumps on the surface, have a drink while you’re at it. And everything is 50% off! For now, my terms are total DIY and why not?” He is not represented by a gallery but he is open to it, with the right deal. He continues to create work that is both fulfilling and aesthetically interesting, even through bouts of depression, through recording and touring with Sloan, and through his own self-critical eyes. “Art goes from being an auto-pilot process to a battle. There’s a chance you might not win,” he says. But other times, it’s creation, and victory. The relationship between Scott’s artistic output and musical practices seems wholly intertwined, and more than anything, it is clear that determination and attitude is everything. And anyway, Scott says, “Who doesn’t love a dog?” Andrew Scott’s art can be viewed and purchased at www.andrewscottwork.com

Gerald Fergusen (1937-2009) Born in Cincinnati, Ferguson began teaching at NSCAD in 1968 as a conceptual visual artist. He founded the Master of Fine Arts program in 1973. In 1995, he won the Canadian Council for the Arts Molson Prize, and retired as Professor Emeritus in 2006. Considered one of modern art’s most important figures, his practice ranged from paintings to frottage, and his pieces are held in private collections and galleries around the world. His contributions to Canadian art are immeasurable. Andrew remembers: “Jerry was a real hard ass and his moods could shift in an instant. He was notorious for reducing students to tears with his criticism. If he left a Diet Coke can on your studio table, you were accepted under his wing. He definitely left cans with me but he could tear a strip off me just as fast. But I trusted him and gathered so much about attitude, approach and ethic. “..1% inspiration - 99% perspiration…” That’s how he taught.”

The first issue of Mixtape Magazine features P.E.I.'s Paper Lions on a romp through their hometown as they reflect on their past, present and future. We also take the Polaris prize apart, giving our thoughts on those who didn't make the final cut and taking a closer look at those who did. Detailed album reviews, suggested playlists and interviews with Whitehorse, Shad, and Metric's Emily Haines all combine to give the reader over 50 pages of personal, insightful and thoughtful reporting on Canada's best new and emerging musicians. 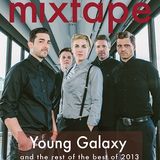