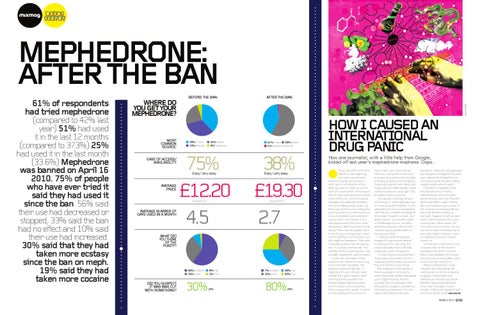 Mephedrone: after the ban where DO you get your mephedrone?

average number of days used in a month

after the ban: ANDY STEWARD

what did you think of the purity?

did you suspect it was was cut with something?

HOW I CAUSED AN INTERNATIONAL DRUG PANIC

How one journalist, with a little help from Google, kicked off last year’s mephedrone madness. Oops... It was late 2007 when I first heard of a new legal drug that users said was like a mixture of ecstasy and cocaine. I didn’t pay it much attention at first, thinking it was just a fad, but as time went on it seemed from online reports that this new drug worked, but no one knew what it was: not the thousands of people enthusiastically shovelling the fishy-smelling white powders up their nose, nor the nurses helping the gurning nutters who’d done too much. I was on a bulletin board looking for stories when I saw mention of two new legal products that users were raving about. Well, they weren’t strictly raving. These were drug geeks sat at home caning a new legal high, known then as NeoDoves and Subcoca, sold by Israeli firm Neorganics. They were rhapsodising about them all over the net – if you knew where to look. The contents of these white capsules, sold as health supplements, were a mystery. I spent days and nights lurking about the net’s darker corners trying to discover their ingredients. Not because I wanted to get high – I might be a 40-year-old acid house veteran but I wasn’t ready to start snorting mystery powders from foreign websites (like skinny jeans, primary colours and moustaches, that’s a young man’s game). I wanted to know because if I found out, I’d

have a major news story to break. Here was a drug that was like a mix of ecstasy and cocaine, that was legal, and that was about to kick off, big time. I especially wanted to learn about and make public the health dangers. I also wanted the exclusive, and I got it. But be careful what you wish for... The capsules contained, among other things, 4-methyl methcathinone, an inbred stepchild of MDMA. For this information the hat must be tipped to John Ramsey, a brilliant toxicologist at St George’s Hospital in London, and phase_dancer, an Australian poster on the Bluelight forums, who after painstaking research with his harm reduction group posted analysis of the capsules online. I called a contact at specialist magazine Drugscope and offered to write about this new drug. The sharp-eyed editor there, Max Daly, jumped at it, and it was game on. The day the piece was publshed in Drugscope, the Guardian and The Telegraph picked my piece up and ran their own stories on my findings. But unbeknown to the editors of these newspapers, or to me, the clever ‘plant food’ vendors had signed up to Google Adwords. And the Guardian and The Telegraph were being paid by Google to use Adsense, which picks up keywords from news reports and matches them with

advertisers’ keywords, and generates ads linking the two together. So every news report that resulted from my story had an ad at the bottom telling readers exactly where to get it! Production snowballed. Once the chemical name, 4-methyl methcathinone, was in the public domain anyone could mail a lab and get it made. Within weeks, Chinese labs were synthesising hundreds of kilos a month and sending it all over the world. Websites sprang up overnight, flogging the stuff as plant food in order to avoid the UK’s food and drug laws. Within weeks, the moral panic was in full flow, The Sun was onto it and it was being used on every high street in the land – and if you believed the papers, in every school, too. Until the ban in April 2009, it was a narcotic free-for-all. Now the comedown’s hit, and it’s hit hard. Meph is still available on the streets, but prices are up and quality is down. And you can get nicked for it. Before mephedrone, I would normally have followed that last sentence with a criticism of existing drug laws, which I feel are as ineffective as they are hypocritical. But after seeing what happened when meph was legal, I have to wonder: what would happen if there were no drug laws at all? mike power MARCH 2011 [[2R]]