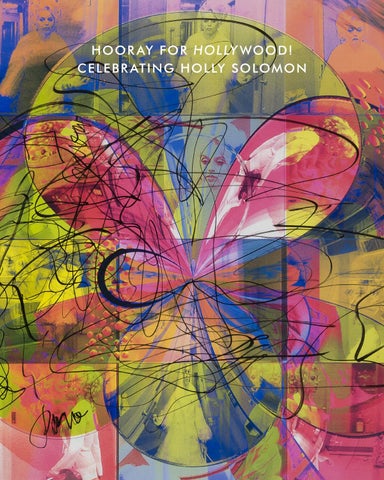 When Holly Solomon was setting up her first gallery in Soho in 1975, the artist Thomas Lanigan-Schmidt suggested “she change the name from the Holly Solomon Gallery to The Ellis Island Gallery.” Solomon rejected Lanigan-Schmidt’s metaphor of the artist as a new-world immigrant, but she understood its meaning. The commercial representation her gallery offered certain artists such as Richard Nonas, Tina Girouard, Donna Dennis, Kim MacConnel, Robert Kushner, Laurie Anderson, among others, gave them the opportunity to build their careers as they moved into the mainstream art world. But having her name on the window of her gallery represented more to Solomon than just having her name up in lights. The creation of the Holly Solomon Gallery was, at that point, the culmination of a “life-long interest and love in acting, art collecting and alternative performance spaces.” These three areas all came into one focus when she opened her gallery. Holly Solomon was born Hollis Dworkin in 1934, and grew up in a Jewish, middle-class, area in Bridgeport, Connecticut. During her college years at Sarah Lawrence, she studied acting and minored in art history. She married Horace Solomon in June 1954 and moved to New York City. There, she studied acting at The Actor’s Studio and later with Lee Strasberg. She auditioned for parts in plays using the stage name Hollis Belmont. During these years she also raised her sons, Thomas and John. A pivotal moment came in 1962 when Holly and Horace Solomon began collecting Pop Art. Solomon was fortunate at this time to meet Richard Bellamy, Director of The Green Gallery, and Leo Castelli, who were both instrumental in exhibiting and establishing the Pop Art genre. Bellamy’s gallery, in particular, became one of the most important galleries for Solomon to see the “new art” from 1960 to 1965. Solomon would hang out at The Green Gallery, “just learning, talking to artists. . . . I would look at the shows, look through the racks. . . . I really wanted to learn.” It became her “second home.” When her father died in 1964, Solomon inherited six thousand dollars, which became the monetary basis for building her collection. Being known as a collector gave Solomon a “public presence,” but Warhol’s 1966, nine-panel portrait of Holly Solomon made her a pop icon. This certainly idealized her image in the public mind, but as Ned Smyth remarked, “portraits of Holly Solomon are self-acknowledgements of her social status and celebrity.” She appeared in not only Warhol’s portrait, but also Roy Lichtenstein’s portrait, I’m Sorry, 1964; Robert Rauschenberg’s Polaroid portrait, 1966; Christo’s Wrapped Portrait of Holly, 1966-67; Richard Artschwager’s Portrait of Holly, 1971; Robert Mapplethorpe’s photographic triptych of Solomon reclining and smoking in bed, 1976; Ned Smyth’s Greco-Roman mosaic portrait, 1983; and Thomas Lanigan-Schmidt’s annunciation picture, Holly Solomon Arriving on 57th Street, 1983. 5

These portraits of Holly Solomon all demonstrate an aspect of her theatrical side. Solomon understood the art world at large to be a form of theater and she comprehended how the presentation of an artist’s work can be equated with stage design. Solomon’s theater training helped develop her ability to arrange an exhibition and highlight the true merit of the work. Beginning in the late 1960s, Solomon’s collecting focus changed. She encountered “the experimental pieces of Dennis Oppenheim and work by Italy’s Arte Povera group, works by Walter De Maria, Bruce Nauman, Joseph Kosuth, and conceptual art.”1 The Solomons began collecting the “next generation of artists…” ••• The Solomons opened the 98 Greene Street loft, designed and built by Gordon MattaClark, concurrent with 112 Greene Street. It was a way of supporting artists and giving them a space where they could perform or exhibit work. She remembers, “When I opened the space at 98 Greene Street at the end of 1969, I was a theater person who collected art. The theater no longer interested me, and I felt that it was about time I did something that I could do.”2 The Solomons invited poets from Saint Marks Church to read there; filmmakers to exhibit their films; performance artists to perform; and visual artists to create installations. It was primarily a performance space but a number of artists had their first, one-person shows there such as George Scheenman, Denise Green, Thomas LaniganSchmidt, among others. During the three years of its existence, it offered artists and poets an opportunity to create works in an uncensored venue. Solomon’s patronage of young, downtown artists was the “starting point” in her development toward becoming a dealer. Solomon tirelessly visited the studios of then unknown artists. The dealer John Gibson, for example, first took her to the studio of Gordon MattaClark, who in turn would introduce her to Ned Smyth. The poet Ted Greenwald took Solomon to the studio of Denise Green, who in turn took Solomon to Donna Dennis’s studio and so forth. Jeffrey Lew mentioned how Solomon “would come to your studio and make your work feel important.” During this time, Holly Solomon was learning to be involved in “the artist’s process.” She deeply cared about the artists’ motivations, intentions, and perspectives behind the works, and wanted to support the artists by more complex means than just money. According to Richard Nonas, Solomon “unlike most collectors, understood what the artist was doing because she was an artist herself.” She was clearly more than a financial patron – she was a driving force that helped artists continue making work. ••• On September 6, 1975, Solomon opened a new gallery space at 392 West Broadway. The mid-1970s was also the period of second-wave feminism. This historical movement coincided with Solomon’s gallery opening and her push to be emotionally and financially independent. In a 1981 interview, Solomon said: “It was also important for me in that it opened up my own sense of myself as an independent person. It contributed to my sense of being a capable human being, and as a woman that it was okay to make a living and help others make a living…”3 By opening the gallery, Solomon was merging two aspects

of her life: first, as a Park Avenue matron and secondly as an influential art world patron who enjoyed the company of downtown artists. With thirteen years of experience collecting art and running the 98 Greene Street loft, she was prepared to take on the responsibilities and demands of operating a professional, commercial art gallery. The roster, which included Richard Nonas, Gordon Matta-Clark, Tina Girouard, Mary Heilmann, Ned Smyth, Donna Dennis, Thomas Lanigan-Schmidt, and Laurie Anderson, was a mixture of newly met artists and others who were already involved at 98 and 112 Greene Street. Within the first two years of the gallery’s opening, the subsequent success of the Pattern & Decoration style of work made The Holly Solomon Gallery a “must see” gallery. Solomon wasn’t the sole proponent of Pattern & Decoration, but her efforts to promote and exhibit works by some of the core artists of this style – such as Tina Girouard, Kim MacConnel, Robert Kushner, Valerie Jaudon, Brad Davis, Robert Zakanitch – in both Europe and America, certainly opened a door for the multicultural diversity in the art world that would follow. Ned Smyth believes Holly Solomon was confronting the prevailing aesthetic taste of the New York School by “moving away from Pop art, Minimalism and Conceptual Art, and presenting work that was off the canvas, and decorative.” Certainly, Solomon’s efforts were significant in fostering the pluralist styles of art that partly defined the 1980s art world. Along with her commitment to Pattern & Decoration, Solomon also mounted a range of important exhibitions at 392, including a 1977 exhibit of Robert Mapplethorpe’s photographs; a 1977 exhibit of Marcel Duchamp: Selected Works on Paper; Sigmar Polke’s first New York exhibition in 1980; and important, early exhibitions of Nam June Paik’s video installations. Even after the gallery moved uptown in 1983 to 724 Fifth Avenue, Solomon maintained her stylistic independence. By 1990, her gallery relocated once again to 172 Mercer, back in Soho. The gallery would remain there for almost ten years as Solomon continued exhibiting a wide range of both established and young, unknown artists. She gave shows to Julia Jacquette and Melissa Meyer, among others. Solomon was a maverick and a trendsetter who strongly believed in discovering unknown artists and giving them the opportunity to present their work to the public. She died in 2002, well recognized for her achievements.

—Erik La Prade Erik is currently working on the biography Holly Solomon: The Art of Living

Thanks to Richard Nonas, Brice Brown and Don Joint.

LAURIE ANDERSON Break It (a film/song in 24/24 time), 1976 collage on paper 22 x 16 inches Collection of Thomas Solomon and John Solomon

ROBERT BARRY It can seem to be interesting…, 1971 typewriter ink on 2 pages of paper 11 x 8½ inches each Collection of Thomas Solomon and John Solomon

JOHN BOWMAN Another World, 1986 oil on linen with wooden frame 20 x 26 inches Courtesy of the artist

GORDON MATTA-CLARK Doors, Through and Through, 1976 three color photographs 20 x 16 inches each Collection of Thomas Solomon and John Solomon

JON RAPPLEYE All the way up to the top of the Night (illuminated), 2013 site-specific duratrans (Window Installation) Courtesy of the artist