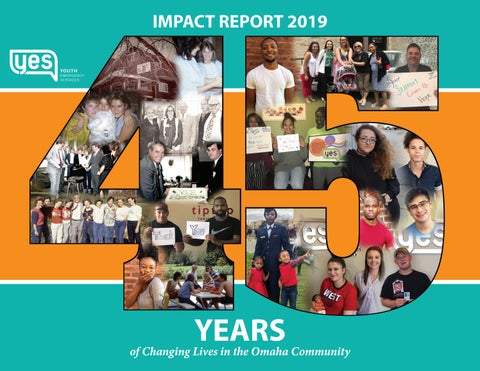 of Changing Lives in the Omaha Community

May, we received a tremendous response from the community during Omaha Gives! in May and 45 years! Giving Tuesday in December. That’s four-plus decades of This past fall, we learned that working diligently and with YES had received two large extreme care to help change federal grants to help fund our and often save the lives of young TLP and MGH programs. We people experiencing homelessfollowed up that success with ness and near-homelessness in The original YES House. a record-setting Dance for a the Omaha community. We started with a small group of individuals who Chance fundraiser in August. We had more dancers, more attendees and raised more money recognized a need and have grown into a team to help support our youth than ever before. that provides a continuum of care. And in December during our annual Santa’s Included in this team is the Omaha community, Workshop, we were overwhelmed by the amount which has supported us throughout our journey. of giving we saw from the community with gifts With it being such a special year, it seems only for our youth for the holidays. fitting that it was one of our most successful. We know we couldn’t have done most of this Not only did we serve more than 3,000 young without the community’s support, and we are people through our four core programs ­-tremendously grateful for the continued Emergency Shelter, Street Outreach, Transitional generosity of everyone included in this report! Living (TLP) and Maternity Group Home (MGH) -- we also set the foundational groundwork for a With gratitude, new program, Rapid Rehousing. This new program is taking shape and will help young people quickly find stable, safe housing in 2020 and moving forward. Mary Fraser Meints Bryan Peterson Along with a very successful golf fundraiser in Executive Director Past Board President e reached a significant milestone in 2019.

Why I Support YES “I was fortunate enough to be raised by loving parents who provided unconditional support and resources to help me succeed in life. It never occurred to me that young people in our community­– in Nebraska – were at-risk or homeless as a result of teen pregnancy, human trafficking, gender identification or lack of family support. YES opened my eyes to the very real issue of youth homelessness in our community and, like YES, I refuse to let that cycle go on unchecked.” — Jeff Ziemba YES Board President

Board of Directors Jeff Ziemba

On the Cover: A history of YES

through the years, from the early days to today commemorating our 45-year anniversary in photos.

YES Impacts Lives! Youth Emergency Services (YES) was founded in 1974 by a group of community volunteers who noticed homeless youth hanging around in Omaha&#39;s Old Market. Originally led by volunteers, now YES has the staff to address and meet the needs of youth experiencing homelessness and near-homelessness.

No matter a youth’s situation, Youth Emergency Services offers a continuum of programs and services. We believe all youth, no matter where they come from or who they are, should feel safe and welcome. Throughout our programs, YES offers specialized case management services, the opportunity for youth to be paired with a community mentor and regular support groups to help youth build life skills, make connections and strengthen relationships.

Our Mission: To serve homeless and near-homeless youth by providing critically-needed resources which empower them to become self-sufficient.

Started in 1999, the Street Outreach Progam engages homeless and street-dependent youth, ages 12 to 21. Youth are welcome at this safe place to eat a meal, take a hot shower, do laundry, meet with health care professionals and get help obtaining a license or identification.

YES’ Emergency Shelter has been serving youth in crisis for more than 40 years and is staffed 24 hours a day, seven days a week with youth care workers who provide individualized support for homeless youth ages 16-20 to get them back on track.

In 2008, YES launched its Transitional Living Program (TLP) which provides long-term services to runaway and homeless youth, ages 16 to 21. TLP residents live in apartment-style homes for a maximum of 18 months and work closely with transition advocates with the goal of gaining safe, secure housing.

The Maternity Group Home provides services to runaway and homeless youth, ages 16 to 21, who are pregnant or parenting and may not be able to access services. Young mothers live in a family-style residence for a maximum of 18 months and work with case managers with the goal of becoming self-sufficient.

The Mentoring Program creates a special opportunity for youth to develop a positive, sustained relationship with a trustworthy and influential adult to help guide them on a path to success.

Working in conjunction with the Women’s Center for Advancement’s (WCA) Indigo program, YES strives every day to identify youth who are survivors of human trafficking and provide the resources they need in and around the Omaha Metro. Indigo is a resource for building awareness, educating the community and healing victims of human trafficking for young people ages 17-24.

Our youth need this now more than ever.

IMPACT BY THE NUMBERS

We envision a community that understands and embraces its youth, creating an environment where youth homelessness no longer exists.

Youth in TLP Program Employed or Actively Looking for Work

Average Length of Stay in TLP

irst as a Cub Scout and then as a Boy Scout, Matt Urbanski has been involved with service projects for most of his life. In his view, giving back to the community should be something every young person should do. He believes it should even be a requirement to graduate high school. So, when he learned about the need for a deck replacement and some new siding at our Emergency Shelter, he was more than excited to take action and give back. “It started as an Eagle Scout project, but I wasn’t able to finish before the deadline (his 18th birthday), so I did something else,” said Urbanski, who has been involved with the Scouts since first grade and is now a freshman at Hastings College. “But I still wanted to build the deck and give back, so this (past) summer, I continued with it. It was something I hadn’t done before, but I think the final project turned out really well.” From start to finish, Urbanski said the deck teardown and rebuild took more than two months (due to foundation repair delays) and more than 250 hours. Now, the residents and staff at our shelter have a safe, beautiful deck to use year-round.

rendon has always been a fighter. It’s one of the few but valuable life skills his father taught him and his brother before he left. “My brother and I would roughhouse with each other quite a bit, and when he would make me cry, my dad told me to hit him back,“ said Brendon, a 20-yearold in the Youth Emergency Services (YES) Transitional Living Program (TLP). “When I said no because my brother would only hit me harder, my dad hit me to try and give me the strength to stand up to my brother in a way that made sense to him.” That ability to protect himself has come in handy on multiple occasions for Brendon. Two years ago, he left home near the end of his senior year after a disagreement with his mom. He’s been on his own ever since. He lived with friends, couch-surfed when he could and slept on the cold Omaha streets while he figured out what he wanted to do with his life. This past summer, he learned about Youth Emergency Services from a friend, and he’s been part of our TLP ever since. Brendon’s goal is to one day open and operate his own martial arts studio, and he’s taking the necessary steps now to make that a future reality.

Street Outreach The Street Outreach Program engages homeless and street-dependent youth, ages 12 to 21. Youth are welcome to eat a meal, take a hot shower, do laundry, and get help obtaining a license or identification.

onika (middle), a former resident in our Maternity Group Home, received the gift of a car this summer from Chariots4Hope. Chariots4Hope works in collaboration with many area nonprofits by restoring donated cars and awarding them to eligible low-income families and individuals, who are referred by nonprofit agencies like Youth Emergency Services. Thank you to this amazing partner organization for helping young mothers like Monika secure the means they need to become self-sufficient and live independently with their children.

Mentoring The Mentoring Program creates an opportunity for youth to develop a positive, sustained relationship with a trustworthy and influential adult.

Amount Raised in 2019: $135,473 Thanks to the fundraising connections and dancing talents of 10 community leaders, the 2019 11th Annual Red Carpet Affair-themed Dance for a Chance, presented by C&amp;A Industries, raised more than $135,000 August 1. Those figures surpassed last year’s event by almost $40,000, largely due to a record number of attendees and the fundraising efforts of the 10 dancers, who, in total, raised more than $85,000. The 2020 Dance for a Chance is August 7 with a “Roaring Twenty-Twenties” theme!

Amount Raised in 2019: $50,116 Thanks to a heavy social media campaign that began in April, as well as digital communications focused on community organizations, board members and donors, 2019 Omaha Gives! resulted in an amazing display of giving! We set our goal at $50,000, and we surpassed it! The 2020 Omaha Gives! is May 20, and we are planning for another great day of giving! Thank you to everyone who made a donation in 2019!

Amount Raised in 2019: $71,541 With more than 45 teams, a tremendous response from sponsors and great food and fun, the 2019 YES Golf Outing, presented by Union Pacific Railroad, surpassed $70,000 on a rainy day in May at The Players Club at Deer Creek. Participants, YES and The Players Club provided a wide range of golf-related items as raffle prizes, and everyone enjoyed a great time despite having to stop play early because of the weather. We hope to see everyone back May 4 this year, once again at The Players Club, for another fun day of golfing and giving!

Amount Raised in 2019: $13,895 Backed by a strong online and social media campaign that started in November, this yearâ&amp;#x20AC;&amp;#x2122;s Giving Tuesday set another record for YES! With a matching grant from the Dunklau Foundation available, we came very close to reaching our $15,000 goal. The money will go to support our Maternity Group Home mothers, who, as you can see from the photo above, are very grateful. Giving Tuesday 2020 is December 1. Thank you to everyone who gave to help support YES!

Volunteers are the lifeblood of nonprofits, and YES is no exception. From donated meals at our Street Outreach Center to businesses doing clean-up at our Emergency Shelter as part of the United Wayâ&amp;#x20AC;&amp;#x2122;s Day of Caring, YES benefited from tremendous volunteerism in 2019. Thank you to all the individuals, churches, organizations and businesses that volunteered for YES. We are so grateful!

Thank you to everyone who supports YES and our youth!

Listed below are donors who provided generous monetary gifts in support of homeless youth. Not included here are the countless individuals, groups and companies who supported YES with in-kind donations throughout the year.

For a list of our generous individual donors, please visit www.yesomaha.org/report

All proceeds from the sale of donated clothing and home goods at Tip Top Thrift Shop support YESâ&amp;#x20AC;&amp;#x2122; mission of ending youth homelessness.

Union Pacific has been the Presenting Sponsor for YES’ annual golf outing for many years. They are instrumental in securing other event sponsors as well as participating teams.

These are a few photos from YES’ early days. 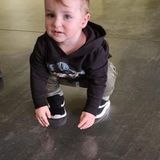