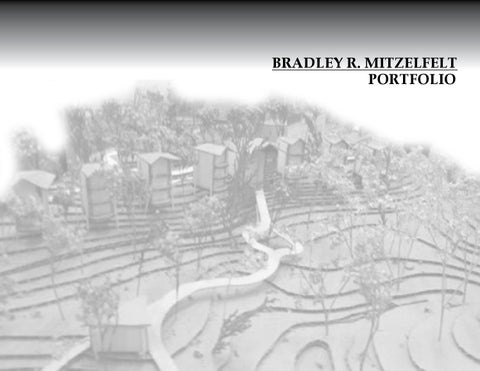 GREEK LAKE HOUSING COMPLEX With the phasing out of the current greek community housing at Southern Illinois University at Carbondale scheduled for 2013 due to the requirement of fire sprinklers being added to the building, it has become a necessity to design a solution for a new community. With four hundred beds in two separate buildings, the Greek Lake Housing Complex will suit the needs of not only the on campus Greek community, but also graduate students. It features one-bedroom, two-bedroom, three-bedroom, and four-bedroom apartment with eat in kitchens, private restrooms, and one bed bedrooms. The ground floor of each building has four separate multi-purpose rooms, two of which include kitchens. On the northern and western portion of the site are rows of solar panels to provide energy for the facility which also uses geothermal heating and cooling.

SHELTER1 At present there is an ongoing problem in the world with housing due to natural and manmade disasters. This project was to develope and build a temporary shelter with those ideas in mind. SHELTER1 came about as a response to a different sort of disaster: the disaster of homelessness. The project was designed to be situated in alleyways to provide shelter to those that needed it. It was not to be used as a permanent shelter, but as simply a place to sleep and protect onesself from the weather. By providing these shelters in alleys, it gets the homeless away from sleeping on park benches in the publics view. The design is such that the short side can be rolled upward, the shelter can be climbed into, and then the top is rolled back down. The ends have screens to allow for ventilation while keeping bugs out. The project is constructed largely of plywood with some use of 1x4â&#x20AC;&#x2122;s for support on the base. The material to cover and keep rain out is a blue tarp. It was constructed quickly and cheeply and can break down into parts to be transported.

BOTTOM OF BASE PLAN

TOP OF BASE PLAN

UNIVERSITY OF ILLINOIS ATHLETIC TRAINING COMPLEX In light of the recent growth in paralympic sports, and in the understanding that the University of Illinois Urbana/ Champaign wishes to build a new athletic training facility on campus, this complex was designed to not only suit the university, but also outside training groups. Because the campus does not have a true aquatics venue, the complex includes an olympic size swimming pool and dive well with enough seating for one thousand five hundred people. Additionally, the complex contains a full weight and cardio training facility, and a courts room which can be used to hold both basketball and a myriad of other sports. This courts building is not a true competition venue, but a training facility located next to the Assembly Hall. In addition, the facility contains a large commons area with dining options ranging from a buffet to outside vendors. The facility includes a sports medicine complex with research capabilities and a housing complex for athletes from the campus and from outside of the campus. This complex serves the university and area needs.

GERMANTOWN HILLS ELEMENTARY SCHOOL The goal of this project was to determine a school system which was in need of a new school, locate the proper site for the new school, and then design the school to fit the need. For this project, the elementary school in Germantown Hills, Illinois, was chosen for redesign because of the age of the structure and the ill fit with the current site. As it stands, parking is at a premium and the building sits almost right on the corner of two important streets, one being Illinois Route 116 and the other being Fandel Road. The building is old, cramped and outdated compared with the new Junior High School that has recently been constructed. The project required at least three classrooms per grade level as well as a gymnasium, cafeteria, library, and several specialized rooms. The library and specialized rooms (computer lab, data room, etc) are located on the second floor.

Designed as a part of a joint studio, The Westgate is both a hi-rise commercial and hotel tower, and a high speed rail station that is situated just to the west of the Chicago loop where Lake Street meets Canal Street. Due to the nature of the project, both studios worked together in the creation of a tower and a rail station on the same site that are meant to work together. In the case of The Westgate, the tower and rail station share below grade services, connected to a Lower Canal Street, and the base of the tower acts as one of the entrances to the high speed rail station. The tower was designed to cross over Lake street in an effort to create a new gateway to the west of the city. It also allowed for the creation of a unique multi-story atrium space above the road, and allowed for the implimentation of an EL Station at the same site as the high speed rail, making this a transportation hub for the entire city with the exception of the bus system and Metra. The portion of the project focused on here is the tower as it was the other studio that did the rail station, however both are critically important as they coincide with one another, so both are shown in some drawings.

DAWG CYCLES At present there is no home for the Saluki Spokes program and no real safe place to ride a bicycle on campus. Given that Carbondale is so near the cross country bike trail, it was determined that creating a center just for biking on the campus of Southern Illinois University at Carbondale would be beneficial to students, faculty, staff, and visitors. The project is located south of the arena on currently unused land that was largely devestated by the derecho of May 2009. There were three parts to the project: 1) a place to sell, rent, and repair bicycles, 2) a place for visitors to stay temporarily while passing through the area via bicycle, and 3) a biking path along the site. In this case, it was determined that two buildings would be used for the first portion of the project, one for retail and renting, and the other for repair as well as a small convenience store. Hostels would be located on the southwest portion of the site to house cyclists that were passing through on an overnight basis. The biking path that goes around the site actually passes beneath the building meant for the retail and rental. The complex was dubbed DAWG Cycles due to the Saluki being SIUCâ&#x20AC;&#x2122;s mascot and the typical sports chant of Go Dawgs!

MONTREAL WORLD FILM INSTITUTE The city of Montreal in Quebec, Canada, holds an annual World Film Festival in the Fall. At present there is no dedicated facility for this festival to utilize. Taking this into account, and after having visited to see what things are like, the current state of the festival is that the movies are shown in locations spread all throughout the city with no real central hub. This project was designed to create an institute that would not only be used for the festival, but could be used year round for learning as well as for filming. It includes one large stadium seated theater, two medium stadium seated theaters, and two small private screening rooms. It also has a sound proof room for filming, a library to store films to be viewed, viewing stations, offices, and a classroom. A concessions stand is located near the main entrance. The site itself also includes an amphitheater and a backlot where outdoor filming can take place. The backlot is screened by tall walls to help block out excess city noise, but Montreal is a largely pedestrian city and the site chosen sees very little vehicular traffic around it. The red roof was chosen to blend in with the Church with the Red Roof which is across the street on the opposite corner. The overall design for the facility is a play on an old roll of film.

GUNYAH INN Throughout the world there exist points of interest known as UNESCO World Heritage Sites. This project was to design a Travelerâ&#x20AC;&#x2122;s Inn for one of those sites. The site that was chosen for this project was the Franklin-Gordon Wild Rivers National Park which is located in the Tasmanian Wilderness World Heritage Site on the island of Tasmania, Australia. The site is traveled to via boat from the village of Stahan, through Macquarie Harbour, and down the Gordon River. Boats pull up to the docks to allow passengers to disembark. They then travel along a wooden boardwalk, past a rental and tour facility up to the main lodge. From there they are assigned rooms throughout the facility. This particular Inn was designed largely for ecologists and other scientists. The rooms do not have kitchens. The lodge has a cafeteria as well as a bar, library, and laboratory space. The rooms are stacked into eight, three story towers that are raised above the ground to allow water to runoff beneath the structure and to have as little impact on the site as possible. There is a single walkway between the units and the lodge to minimize material cost and to further isolate the room units. There is on-site lodging for staff due to the Inn being located so far away from civilization. Trees cut down for the building of the Inn would be, ideally, reused as part of the construction process for the facility.