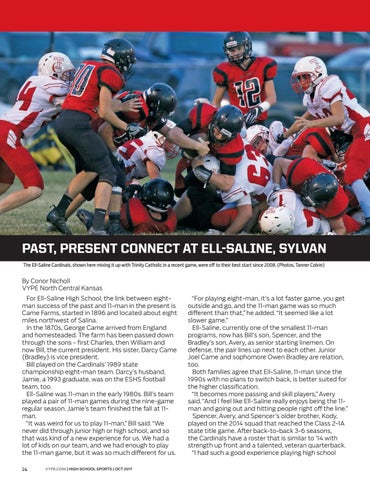 PAST, PRESENT CONNECT AT ELL-SALINE, SYLVAN The Ell-Saline Cardinals, shown here mixing it up with Trinity Catholic in a recent game, were off to their best start since 2008. (Photos, Tanner Colvin)

By Conor Nicholl VYPE North Central Kansas For Ell-Saline High School, the link between eightman success of the past and 11-man in the present is Came Farms, started in 1896 and located about eight miles northwest of Salina. In the 1870s, George Came arrived from England and homesteaded. The farm has been passed down through the sons - first Charles, then William and now Bill, the current president. His sister, Darcy Came (Bradley) is vice president. Bill played on the Cardinals’ 1989 state championship eight-man team. Darcy’s husband, Jamie, a 1993 graduate, was on the ESHS football team, too. Ell-Saline was 11-man in the early 1980s. Bill’s team played a pair of 11-man games during the nine-game regular season. Jamie’s team finished the fall at 11man. “It was weird for us to play 11-man,” Bill said. “We never did through junior high or high school, and so that was kind of a new experience for us. We had a lot of kids on our team, and we had enough to play the 11-man game, but it was so much different for us. 14

“For playing eight-man, it’s a lot faster game, you get outside and go, and the 11-man game was so much different than that,” he added. “It seemed like a lot slower game.” Ell-Saline, currently one of the smallest 11-man programs, now has Bill’s son, Spencer, and the Bradley’s son, Avery, as senior starting linemen. On defense, the pair lines up next to each other. Junior Joel Came and sophomore Owen Bradley are relation, too. Both families agree that Ell-Saline, 11-man since the 1990s with no plans to switch back, is better suited for the higher classification. “It becomes more passing and skill players,” Avery said. “And I feel like Ell-Saline really enjoys being the 11man and going out and hitting people right off the line.” Spencer, Avery, and Spencer’s older brother, Kody, played on the 2014 squad that reached the Class 2-1A state title game. After back-to-back 3-6 seasons, the Cardinals have a roster that is similar to ’14 with strength up front and a talented, veteran quarterback. “I had such a good experience playing high school