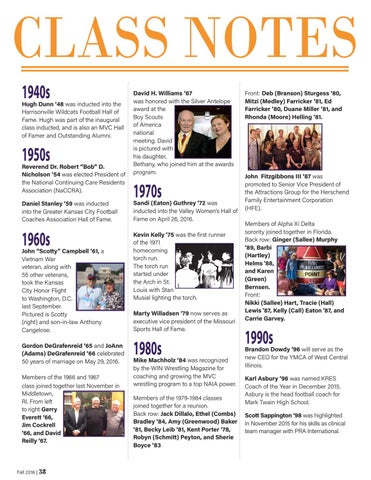 Hugh Dunn ‘48 was inducted into the Harrisonville Wildcats Football Hall of Fame. Hugh was part of the inaugural class inducted, and is also an MVC Hall of Famer and Outstanding Alumni.

John “Scotty” Campbell ‘61, a Vietnam War veteran, along with 55 other veterans, took the Kansas City Honor Flight to Washington, D.C. last September. Pictured is Scotty (right) and son-in-law Anthony Cangelose. Gordon DeGrafenreid ‘65 and JoAnn (Adams) DeGrafenreid ‘66 celebrated 50 years of marriage on May 29, 2016. Members of the 1966 and 1967 class joined together last November in Middletown, RI. From left to right Gerry Everett ‘66, Jim Cockrell ‘66, and David Reilly ‘67.

David H. Williams ‘67 was honored with the Silver Antelope award at the Boy Scouts of America national meeting. David is pictured with his daughter, Bethany, who joined him at the awards program.

Sandi (Eaton) Guthrey ‘72 was inducted into the Valley Women’s Hall of Fame on April 26, 2016. Kevin Kelly '75 was the first runner of the 1971 homecoming torch run. The torch run started under the Arch in St. Louis with Stan Musial lighting the torch. Marty Willadsen ‘79 now serves as executive vice president of the Missouri Sports Hall of Fame.

Brandon Dowdy ‘96 will serve as the new CEO for the YMCA of West Central Illinois. Karl Asbury ‘96 was named KRES Coach of the Year in December 2015. Asbury is the head football coach for Mark Twain High School. Scott Sappington ‘98 was highlighted in November 2015 for his skills as clinical team manager with PRA International.