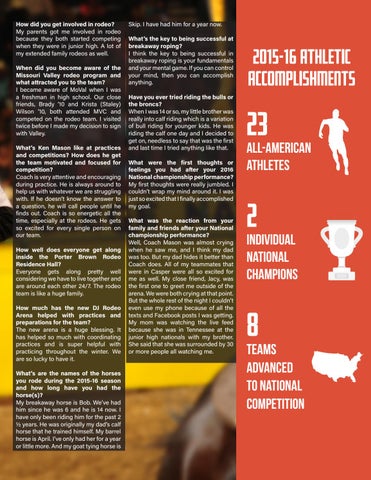 How did you get involved in rodeo? My parents got me involved in rodeo because they both started competing when they were in junior high. A lot of my extended family rodeos as well. When did you become aware of the Missouri Valley rodeo program and what attracted you to the team? I became aware of MoVal when I was a freshman in high school. Our close friends, Brady ‘10 and Krista (Staley) Wilson ’10, both attended MVC and competed on the rodeo team. I visited twice before I made my decision to sign with Valley. What’s Ken Mason like at practices and competitions? How does he get the team motivated and focused for competition? Coach is very attentive and encouraging during practice. He is always around to help us with whatever we are struggling with. If he doesn’t know the answer to a question, he will call people until he finds out. Coach is so energetic all the time, especially at the rodeos. He gets so excited for every single person on our team. How well does everyone get along inside the Porter Brown Rodeo Residence Hall? Everyone gets along pretty well considering we have to live together and are around each other 24/7. The rodeo team is like a huge family. How much has the new DJ Rodeo Arena helped with practices and preparations for the team? The new arena is a huge blessing. It has helped so much with coordinating practices and is super helpful with practicing throughout the winter. We are so lucky to have it. What’s are the names of the horses you rode during the 2015-16 season and how long have you had the horse(s)? My breakaway horse is Bob. We’ve had him since he was 6 and he is 14 now. I have only been riding him for the past 2 ½ years. He was originally my dad’s calf horse that he trained himself. My barrel horse is April. I’ve only had her for a year or little more. And my goat tying horse is

Skip. I have had him for a year now. What’s the key to being successful at breakaway roping? I think the key to being successful in breakaway roping is your fundamentals and your mental game. If you can control your mind, then you can accomplish anything. Have you ever tried riding the bulls or the broncs? When I was 14 or so, my little brother was really into calf riding which is a variation of bull riding for younger kids. He was riding the calf one day and I decided to get on, needless to say that was the first and last time I tried anything like that. What were the first thoughts or feelings you had after your 2016 National championship performance? My first thoughts were really jumbled. I couldn’t wrap my mind around it. I was just so excited that I finally accomplished my goal. What was the reaction from your family and friends after your National championship performance? Well, Coach Mason was almost crying when he saw me, and I think my dad was too. But my dad hides it better than Coach does. All of my teammates that were in Casper were all so excited for me as well. My close friend, Jacy, was the first one to greet me outside of the arena. We were both crying at that point. But the whole rest of the night I couldn’t even use my phone because of all the texts and Facebook posts I was getting. My mom was watching the live feed because she was in Tennessee at the junior high nationals with my brother. She said that she was surrounded by 30 or more people all watching me.