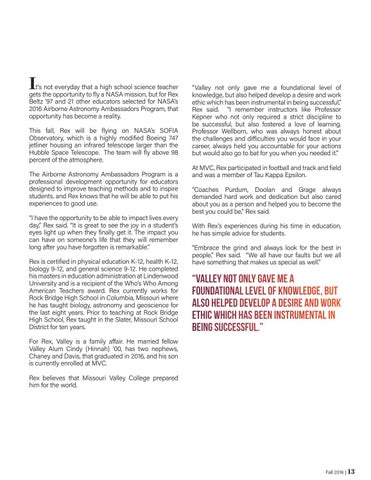 t's not everyday that a high school science teacher gets the opportunity to fly a NASA mission, but for Rex Beltz ‘97 and 21 other educators selected for NASA’s 2016 Airborne Astronomy Ambassadors Program, that opportunity has become a reality. This fall, Rex will be flying on NASA’s SOFIA Observatory, which is a highly modified Boeing 747 jetliner housing an infrared telescope larger than the Hubble Space Telescope. The team will fly above 98 percent of the atmosphere. The Airborne Astronomy Ambassadors Program is a professional development opportunity for educators designed to improve teaching methods and to inspire students, and Rex knows that he will be able to put his experiences to good use. “I have the opportunity to be able to impact lives every day,” Rex said. “It is great to see the joy in a student’s eyes light up when they finally get it. The impact you can have on someone’s life that they will remember long after you have forgotten is remarkable.” Rex is certified in physical education K-12, health K-12, biology 9-12, and general science 9-12. He completed his masters in education administration at Lindenwood University and is a recipient of the Who’s Who Among American Teachers award. Rex currently works for Rock Bridge High School in Columbia, Missouri where he has taught biology, astronomy and geoscience for the last eight years. Prior to teaching at Rock Bridge High School, Rex taught in the Slater, Missouri School District for ten years.

“Valley not only gave me a foundational level of knowledge, but also helped develop a desire and work ethic which has been instrumental in being successful,” Rex said. “I remember instructors like Professor Kepner who not only required a strict discipline to be successful, but also fostered a love of learning. Professor Wellborn, who was always honest about the challenges and difficulties you would face in your career, always held you accountable for your actions but would also go to bat for you when you needed it.” At MVC, Rex participated in football and track and field and was a member of Tau Kappa Epsilon. “Coaches Purdum, Doolan and Grage always demanded hard work and dedication but also cared about you as a person and helped you to become the best you could be,” Rex said. With Rex’s experiences during his time in education, he has simple advice for students. “Embrace the grind and always look for the best in people,” Rex said. “We all have our faults but we all have something that makes us special as well.”

“Valley not only gave me a foundational level of knowledge, but also helped develop a desire and work ethic which has been instrumental in being successful.”

For Rex, Valley is a family affair. He married fellow Valley Alum Cindy (Hinnah) ‘00, has two nephews, Chaney and Davis, that graduated in 2016, and his son is currently enrolled at MVC. Rex believes that Missouri Valley College prepared him for the world.