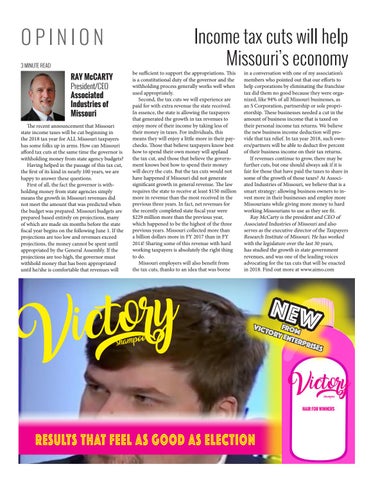 RAY McCARTY President/CEO Associated Industries of Missouri The recent announcement that Missouri state income taxes will be cut beginning in the 2018 tax year for ALL Missouri taxpayers has some folks up in arms. How can Missouri afford tax cuts at the same time the governor is withholding money from state agency budgets? Having helped in the passage of this tax cut, the first of its kind in nearly 100 years, we are happy to answer these questions. First of all, the fact the governor is withholding money from state agencies simply means the growth in Missouri revenues did not meet the amount that was predicted when the budget was prepared. Missouri budgets are prepared based entirely on projections, many of which are made six months before the state fiscal year begins on the following June 1. If the projections are too low and revenues exceed projections, the money cannot be spent until appropriated by the General Assembly. If the projections are too high, the governor must withhold money that has been appropriated until he/she is comfortable that revenues will

be sufficient to support the appropriations. This is a constitutional duty of the governor and the withholding process generally works well when used appropriately. Second, the tax cuts we will experience are paid for with extra revenue the state received. In essence, the state is allowing the taxpayers that generated the growth in tax revenues to enjoy more of their income by taking less of their money in taxes. For individuals, this means they will enjoy a little more in their paychecks. Those that believe taxpayers know best how to spend their own money will applaud the tax cut, and those that believe the government knows best how to spend their money will decry the cuts. But the tax cuts would not have happened if Missouri did not generate significant growth in general revenue. The law requires the state to receive at least $150 million more in revenue than the most received in the previous three years. In fact, net revenues for the recently completed state fiscal year were $229 million more than the previous year, which happened to be the highest of the three previous years. Missouri collected more than a billion dollars more in FY 2017 than in FY 2014! Sharing some of this revenue with hard working taxpayers is absolutely the right thing to do. Missouri employers will also benefit from the tax cuts, thanks to an idea that was borne

in a conversation with one of my associationâ&#x20AC;&#x2122;s members who pointed out that our efforts to help corporations by eliminating the franchise tax did them no good because they were organized, like 94% of all Missouri businesses, as an S Corporation, partnership or sole proprietorship. These businesses needed a cut in the amount of business income that is taxed on their personal income tax returns. We believe the new business income deduction will provide that tax relief. In tax year 2018, such owners/partners will be able to deduct five percent of their business income on their tax returns. If revenues continue to grow, there may be further cuts, but one should always ask if it is fair for those that have paid the taxes to share in some of the growth of those taxes? At Associated Industries of Missouri, we believe that is a smart strategy: allowing business owners to invest more in their businesses and employ more Missourians while giving more money to hard working Missourians to use as they see fit. Ray McCarty is the president and CEO of Associated Industries of Missouri and also serves as the executive director of the Taxpayers Research Institute of Missouri. He has worked with the legislature over the last 30 years, has studied the growth in state government revenues, and was one of the leading voices advocating for the tax cuts that will be enacted in 2018. Find out more at www.aimo.com

RESULTS THAT FEEL AS GOOD AS ELECTION 7 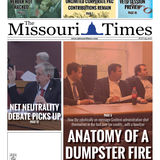