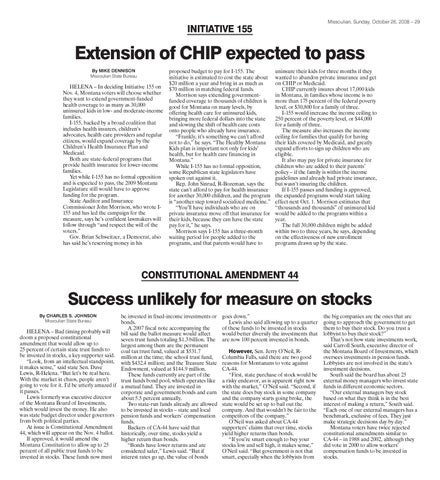 HELENA – In deciding Initiative 155 on Nov. 4, Montana voters will choose whether they want to extend government-funded health coverage to as many as 30,000 uninsured kids in low- and moderate-income families. I-155, backed by a broad coalition that includes health insurers, children’s advocates, health care providers and regular citizens, would expand coverage by the Children’s Health Insurance Plan and Medicaid. Both are state-federal programs that provide health insurance for lower-income families. Yet while I-155 has no formal opposition and is expected to pass, the 2009 Montana Legislature still would have to approve funding for the program. State Auditor and Insurance Commissioner John Morrison, who wrote I155 and has led the campaign for the measure, says he’s confident lawmakers will follow through “and respect the will of the voters.” Gov. Brian Schweitzer, a Democrat, also has said he’s reserving money in his

proposed budget to pay for I-155. The initiative is estimated to cost the state about $20 million a year and bring in as much as $70 million in matching federal funds. Morrison says extending governmentfunded coverage to thousands of children is good for Montana on many levels, by offering health care for uninsured kids, bringing more federal dollars into the state and slowing the shift of health care costs onto people who already have insurance. “Frankly, it’s something we can’t afford not to do,” he says. “The Healthy Montana Kids plan is important not only for kids’ health, but for health care financing in Montana.” While I-155 has no formal opposition, some Republican state legislators have spoken out against it. Rep. John Sinrud, R-Bozeman, says the state can’t afford to pay for health insurance for another 30,000 children, and the program is “another step toward socialized medicine.” “You’ll have individuals who are on private insurance move off that insurance for their kids, because they can have the state pay for it,” he says. Morrison says I-155 has a three-month waiting period for people added to the programs, and that parents would have to

uninsure their kids for three months if they wanted to abandon private insurance and get on CHIP or Medicaid. CHIP currently insures about 17,000 kids in Montana, in families whose income is no more than 175 percent of the federal poverty level, or $30,800 for a family of three. I-155 would increase the income ceiling to 250 percent of the poverty level, or $44,000 for a family of three. The measure also increases the income ceiling for families that qualify for having their kids covered by Medicaid, and greatly expand efforts to sign up children who are eligible. It also may pay for private insurance for children who are added to their parents’ policy – if the family is within the income guidelines and already had private insurance, but wasn’t insuring the children. If I-155 passes and funding is approved, the expanded programs would start taking effect next Oct. 1. Morrison estimates that “thousands and thousands” of uninsured kid would be added to the programs within a year. The full 30,000 children might be added within two to three years, he says, depending on the effectiveness of new enrollment programs drawn up by the state.

be invested in fixed-income investments or bonds. A 2007 fiscal note accompanying the HELENA – Bad timing probably will bill said the ballot measure would affect doom a proposed constitutional seven trust funds totaling $1.3 billion. The amendment that would allow up to largest among them are the permanent 25 percent of certain state trust funds to coal tax trust fund, valued at $531.7 be invested in stocks, a key supporter said. million at the time; the school trust fund, “Look, from an intellectual standpoint, with $432.4 million; and the Treasure State it makes sense,” said state Sen. Dave Endowment, valued at $144.9 million. Lewis, R-Helena. “But let’s be real here. These funds currently are part of the With the market in chaos, people aren’t trust funds bond pool, which operates like going to vote for it. I’d be utterly amazed if a mutual fund. They are invested in it passes.” corporate and government bonds and earn Lewis formerly was executive director about 5.5 percent annually. of the Montana Board of Investments, Two state-run funds already are allowed which would invest the money. He also to be invested in stocks – state and local was state budget director under governors pension funds and workers’ compensation from both political parties. funds. At issue is Constitutional Amendment Backers of CA-44 have said that 44, which will appear on the Nov. 4 ballot. historically, over time, stocks yield a If approved, it would amend the higher return than bonds. Montana Constitution to allow up to 25 “Bonds have lower returns and are percent of all public trust funds to be considered safer,” Lewis said. “But if invested in stocks. These funds now must interest rates go up, the value of bonds

goes down.” Lewis also said allowing up to a quarter of these funds to be invested in stocks would better diversify the investments that are now 100 percent invested in bonds. However, Sen. Jerry O’Neil, RColumbia Falls, said there are two good reasons for Montanans to vote against CA-44. “First, state purchase of stock would be a risky endeavor, as is apparent right now with the market,” O’Neil said. “Second, if the state does buy stock in some company and the company starts going broke, the state would be set up to bail out the company. And that wouldn’t be fair to the competitors of the company.” O’Neil was asked about CA-44 supporters’ claims that over time, stocks yield higher returns than bonds. “If you’re smart enough to buy your stocks low and sell high, it makes sense,” O’Neil said. “But government is not that smart, especially when the lobbyists from

the big companies are the ones that are going to approach the government to get them to buy their stock. Do you trust a lobbyist to buy their stock?” That’s not how state investments work, said Carroll South, executive director of the Montana Board of Investments, which oversees investments in pension funds. Lobbyists are not involved in the state’s investment decisions. South said the board has about 25 external money managers who invest state funds in different economic sectors. “Our external managers buy stock based on what they think is in the best interest of making a return,” South said. “Each one of our external managers has a benchmark, exclusive of fees. They just make strategic decisions day by day.” Montana voters have twice rejected constitutional amendments similar to CA-44 – in 1988 and 2002, although they did vote in 2000 to allow workers’ compensation funds to be invested in stocks.