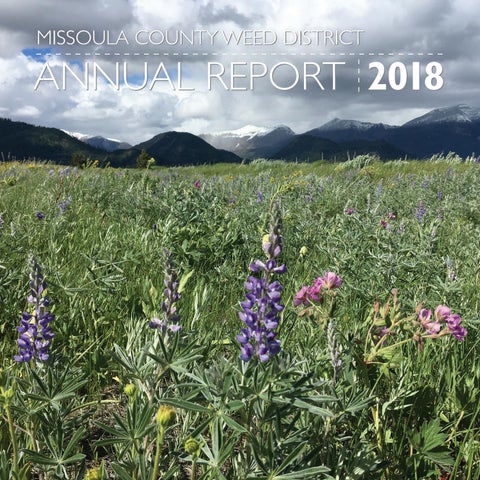 2018 MARKED THE BEGINNING of an exciting new partnership between the Missoula County Weed District and the Missoula Butterfly House and Insectarium, when they joined our vision for a new facility at the Missoula County Fairgrounds. The facility has been designed around our many community education and outreach programs, and feature greenhouses, a Master Gardener lab, demonstration kitchen, expanded plant clinic, a large diversity of teaching gardens and classrooms as well as a year-round tropical butterfly house. Groundbreaking for the facility will begin in 2020!

Back rendering of new facility

Native grass illustrations featured throughout this document were produced by Evelyn Neel.

The 2018 AIS season consisted of a combination of prevention, monitoring and education/ outreach. Missoula County Weed District partnered with multiple agencies and watershed organizations to help protect Western Montana waterbodies from the threat of aquatic invasive species. MCWD managed and staffed the Clearwater Watercraft Inspection Station (busiest in the state) as well as a roving Watercraft Inspector in the Swan Valley. Through a DNRC grant funded partnership with the Blackfoot Challenge, Clearwater Resource Council and Swan Valley Connections, 13 waterbodies were monitored for aquatic invasive species and a plethora of education and outreach occurred. Vann Lake

PREVENTION Missoula County had another successful year of weed free forage production in 2018. Ten local producers supplied approximately 289 tons of weed free forage to local sportsman, stock growers and federal agencies. The 207 acres of fields certified was the highest total in 13 years and 50 acres more than in 2017. Our local producers grew a variety of forage mixes this year including alfalfa, alfalfa-grass, high carb grass and low carb grass for horses. In addition to growing a variety of forage types local products were again made available at Murdochâ&#x20AC;&#x2122;s Ranch & Home supply, the Axeman and Mountain West CoOp. Growing and using weed free

forage can be a great way to prevent noxious weeds from invading your pasture and backyard. Although some producers advertise weed free products, always look for a Montana Department of Agriculture forage marker and a transport certificate at the time of purchase. As always, the Missoula County Weed District and the Montana Department of Agriculture are committed to growing the weed seed free forage program into the future. If you or someone you know are interested in the weed seed free forage program please contact Matt Deaton at 406-258-4218. And remember, certified forage is required to be fed for at least three days prior to entry when horses or pack animals are used on any public lands in Montana!

â&#x20AC;&#x153;I loved how active the Leave No Weeds ďŹ eld trip was! My (very active) class thrived on this trip and they loved their learning! Thank you!â&#x20AC;? MCPS 5th Grader Teacher The Missoula County Weed District continues to provide programs that promote biodiversity and educate on the importance of healthy plant communities to emphasize the potential impacts invasive species can cause. Youth programs consist of teaching identification skills that encourage students to become acquainted with their surrounding natural spaces. Through hands-on outdoor activities students gain the ability to differentiate between native, nonnative and invasive plants and the roles they play in the ecosystem.

In 2018, the Missoula County Weed District completed its sixth year of the Youth in Restoration program which, to date, has employed 24 high school students. The program provides career mentorship and on-theground, hands-on training in conservation and resource management work. The YIRâ&#x20AC;&#x2122;s program success largely due to cooperative partnerships with state and local land management organizations. The experts and professionals who dedicate their time to the youth crew provide the Koeleria macrantha educational components Junegrass and oversight/expertise that connects the experiential work to the overall landuse benefit of each project. Looking to the future of the Youth in Restoration program, the Weed District will continue to develop new partnerships expanding the experiences and knowledge provided to the youth crew and the program.

What activity did you most enjoy working on this season? SAGE SENTERFEIT:

“I really enjoyed the 5-day Bob Marshall trip, even though it was extremely challenging at times, I valued camping and getting to know my coworkers.There aren’t many high school students who are awarded the opportunity to spend time deep in the backcountry of Montana.”

Of all the projects we worked on, which do you think was the most beneﬁcial? MAYA HEFFERNAN:

“Weeding Sawmill Gulch with the Forest Service was really beneﬁcial because so many people use that area for recreation and keeping it weed free for the community and the environment is really important and especially feels important when it’s in a place where people go.” FIONA MARROW:

“Building trails with Five Valleys Land Trust, not only were we helping restore a now riparian area, we were also making it handicap accessible, which more places need to be in Montana especially outdoor areas.”

BIOCONTROL Engelberg, Weather conditions in the Switzerland winter of 2017/18 and the alpine spring of 2018 resulted in farmland decreased biocontrol agent populations across the state. Insect numbers were about 1/3 of what they have been the last few years and this was not due to a lack of trying. We spent 41 days collecting (all but 2 of these collection days were in Missoula Co.), an increase of 6 days (1.5 work weeks) from 2017 and numbers were still down! Luckily, land managers were interested in services other than insect releases this year. I travelled to 24 locations to give presentations or hold biocontrol workshops, this is an increase of 9 events from 2017! In addition to an increase in the number of days spent collecting and the number of presentations/workshops, I was able to travel to Switzerland for an international biocontrol symposium where I presented a poster on our predicted suitable habitat model (on following page) and was able to visit the lab where much of the host-specificity and impact research is conducted prior to biocontrol agents being released in the U.S. This was a great experience and allowed me to come home with a plethora of new information and a much better understanding of the research that is conducted overseas.

Miles Traveled for Workshops and Collections

The Missoula County Weed District and the Montana Biocontrol Coordination Project partnered with the Montana Natural Heritage Program to develop predicted suitable habitat models for Montanaâ&#x20AC;&#x2122;s most successful biocontrol agents. Based on data associated with known established insect populations, these models allow us to determine the more ideal sites associated with successful establishment and help to increase the efficacy of biocontrol by guiding land managersâ&#x20AC;&#x2122; releases of the insects to sites where they will most likely survive and thrive. These models are a work in progress. Additional known, established populations of insects and ground-truthing the current model output will add to the strength of these models in the future. To view the complete model output for each species visit: http://fieldguide.mt.gov/displaySpecies. aspx?inv=BIOCNTRL

of iris and pepperweed, eradicating many infestations. Despite our efforts, we have watched pepperweed leap frog its way down the Clark Fork River. In 2013 we mapped and treated 48 patches of pepperweed below the Milltown Dam site. That number ballooned to 202 in 2016 and seems to have stabilized in the 140s the last two seasons. 2016 was notable as the first year we found perennial pepperweed spreading into pastureland adjacent to the river which accounts for the huge jump in acreage that year. With help from a Trout Unlimited grant this year we expanded our inventory, mapping the Clark Fork below Missoula County all the way to Superior. We are optimistic that the last pepperweed patch we mapped and treated, just downstream from Alberton, is the bottom of the infestation. While perennial pepperweed is

clearly moving down river and beginning to spread into adjacent fields and uplands, we remain optimistic that our efforts are holding it in check. Our challenges for 2019 are to get more comprehensive control on the larger infestations above the Milltown Dam, continue our seek and destroy missions on the lower river, and respond to seed dispersal from last yearâ&#x20AC;&#x2122;s spring floods. Mapping data on the extent of flooding along the Clark Fork River in the Missoula valley will help us compile a mailing list of landowners who potentially had pepperweed seed moved into their pastures. With any luck we will be able to locate and treat any new infestations that pop up in 2019 as a result of the flooding.