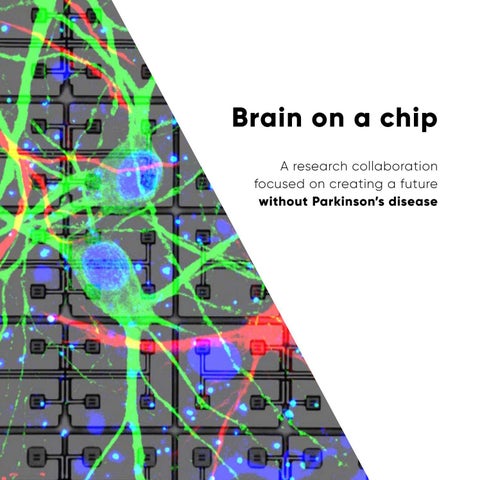 Parkinson’s disease 3 The challenge 4 Our solution: creating a brain on a chip

A glimpse into the future

income, is estimated at around $52 billion

worldwide. This includes over 700,000 people

in the USA, a figure expected to increase to 1.2 million by 2030. The disease mainly

The currently available treatments to control

Parkinson’s symptoms, such as the drug

and slowness of movement. In addition, it is

L-DOPA or deep brain stimulation, only

estimated that 75% of advanced Parkinson’s

offer temporary relief and do not affect the

course of the disease. Curative treatments against Parkinson’s disease remain one of the

The global economic cost of Parkinson’s is

significant. In the USA, the combined direct and indirect cost of Parkinson’s, including

The challenge Progress in Parkinson’s disease research is hampered by three major hurdles. We have very limited access to human

tic tool and be able to study the vulnerable

brain areas before any damage occurs.

Unlike in oncology or immunology, we do not have access to primary diseased tissue.

We lack reliable, reproducible and

post-mortem, which provides only a snap-

shot and often in end stages, when we can

works show abnormal activity, which can

no longer observe the processes that have

only to some extent be modeled by exper-

triggered and driven the disease.

models do not mimic all aspects of human

when important brain regions are al-

cells and human disease, while patient-de-

the variety of cell types and functions in the

based on clinical symptoms, which only ap-

pear when 50-60% of the dopamine neurons have already died. To understand disease progression, we need to have a new diagnos-

Our solution: creating a brain on a chip Our aim is for Parkinson’s to be objectively

defined by solid molecular criteria, rather than by the clinical criteria that are currently

2 We want to re-create these brain cell

used to diagnose the disease. This will mean

types from skin biopsies of patients with Par-

kinson’s. The human samples are available

interventions that effectively slow down or

even stop the disease based on molecular and

Center (ADRC), which house some of the highest-quality

With your support, we aim to create a ‘brain

banks in the USA. Different cell types will be

on a chip’ for Parkinson’s disease. This will

be a cellular model that uses patient cells

to re-construct the neuronal networks of a

way, the cells donated by patients can become

living human brain. This is how it works:

1 We know that Parkinson’s disease affects specific parts of the brain, notably the striatum, and we know which brain cells are affected: dopaminergic, cortical and medium

3 Our strategy is unique and distinctive:

people, so that we can find out what exactly

we plan to induce the differentiation of

goes wrong in the early stages of disease.

patient-specific cells at predefined locations step-by-step on a microchip, to grow the

7 Finally, based on the individual molecular

specific brain circuits that are affected in

and functional signatures recorded by the

chip, we aim to subdivide Parkinson’s patients into different groups (known as ‘stratifica-

tion’), and this both for familial (inherited)

chip will allow us to measure the electrical

and non-familial cases. There are more than

activity of individual cells in the circuit,

which gives us a lot of information about

and a drug that may be extremely effective

for one variation, may not work for others. This effectiveness would only become clear

5 When we re-create brain cells from the

when tested against the specific variation for

patient skin cells, the cells are ‘re-set’. This

which it is suitable – an outcome that could

gives us the opportunity to look at events that

be masked in experiments using unstratified

occur before the onset of disease, and to test

experimental therapeutics. 6 The system will also make it possible to compare the brain cell networks derived from tissue donated by patients versus healthy

The new tool and patient subgroups should

In brief, with brain on a chip, we aim to

ties. It can also be relevant to other neuro-

• A reliable, patient-specific model of Par-

degenerative diseases such as Alzheimer&#39;s

• A map of Parkinson-specific disease

signatures for drug screening and patient

To catalyze worldwide progress, we intend

to share our tool with research groups across the globe.

A glimpse into the future: 3D human brain reactors Our first chip serves to gain crucial insights in what goes wrong in different forms of Parkinson’s disease, but we aim to go much further than that. In a next step, our goal is to develop an even more advanced, 3D version of the chip, which would better mimic the brain’s architecture and give us the relevant information needed to develop a more profound understanding of Parkinson’s disease.

Our team of experts Prof. Dr. Patrik Verstreken (VIB-KU Leuven) is director of the VIB Center for Brain &amp; Disease Research. He is the recipient of several prestigious European awards, including Marie Curie Excellence, ERC Starting and ERC Consolidator grants and the international IBRO-Kemali Prize. He obtained his PhD at HHMI/Baylor College of Medicine, Houston and conducted research for nine years in the USA.

Prof. Dr. Birgitt Schuele (Stanford University School of Medicine) is Associate Professor at the Department of Pathology and co-head of the Udall Analytical and ADRC Neuropathology Cores. She completed her Dr. med in Germany, followed by a neurology internship during which she studied the genetics of Parkinson’s disease and dystonia, and a postdoctoral fellowship in human genetics at Stanford University School of Medicine.

Dr. Dries Braeken (imec) received his PhD in Medical Sciences from KU Leuven, in collaboration with imec, in 2009. Since 2017, he has been group leader and R&amp;D manager in the Life Science Technologies department at imec. His research focuses on the development and validation of silicon technologies for cell and tissue interfacing in healthcare applications.

(UZ Leuven, KU Leuven) directs the Movement Disorders Clinic in Leuven. Each year, about 1,000 patients with Parkinson’s disease visit his clinic in Leuven to receive diagnosis and treatment. Previously, he was a visiting research fellow at the University of Chicago, postdoctoral fellow at the University of California at San Francisco (UCSF), and visiting neurologist at the USCF Movement Disorders Clinic. He now leads a research laboratory that investigates the molecular pathogenesis of Parkinson’s disease, with the goal of identifying new therapeutic targets.

Critical for our successful collaboration

and jointly work on the project. This way,

is that we are exchanging technology and

we are establishing a vibrant, open and

expertise between the Stanford and Leuven

sites. Each site is hosting scientists from the other for several months, to directly interact

Our impact “Brain on a chip is a transformative, multidisciplinary and international collaboration to approach next generation experimental research for Parkinson’s disease. This project will give us deeper insight into functional network changes of the brain, that will allow us to develop new therapies.” Our solution: creating a brain on a chip 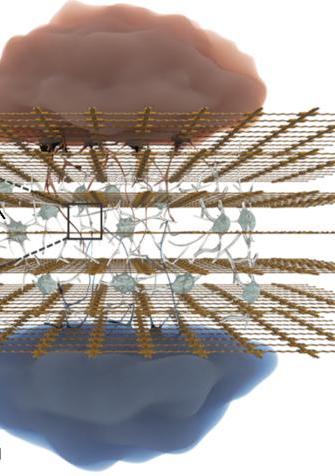 A glimpse into the future

Our team of experts