The story of Lili and Tonton 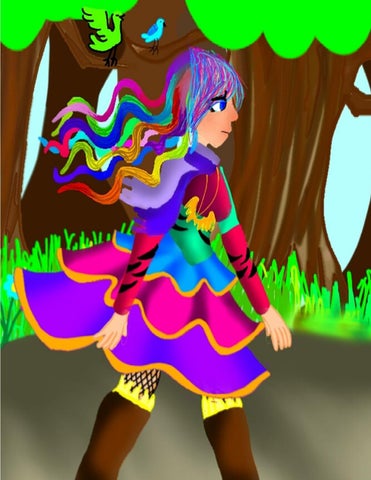 THE STORY of LILI and TONTON â&amp;#x20AC;¢ written by pupils from different primary schools in different countries

INTRODUCTION - LATVIA In the sky world everything was calm until the monster Tonton arrived! Lily was only 5 when the Tonton imprisoned her father in a Star prison. After that, little Lily ran away to the sky forest. There, she met a tribe who did not bend to evil. She grew up there and found her father&#39;s arc... Will she win the evil Tonton?

DESCRIBING THE CHARACTERS - SLOVAKIA Tonton is huge. He has a moustache and a beard. He´s ugly and fat. His eyes are black and yellow. He´s got horns. He is stupid. He imprisoned innocent people, even Lili´s father. He has sharp teeth. He has got big arms, but tiny hands. He wears some sort of invisible clothes. He is very kind to his family, but rude to anyone else.

Lili´s very tall. She has got long curly hair. Her father´s arc is the only memory she has. She´s got blue eyes. She usually wears a warm scarf and a dress. She´s always wearing a golden necklace in the shape of wings. It´s a sign of wisdom and freedom. She might be kind, but she can be also very mad. Her boots are very high and protective against snow. She hates Tonton more than anything else. She usually lets her hair wave in the wind. But sometimes she makes a simple braid. She´s used to cold weather. Her favourite meal is instant soup. She loves pun jokes.

DESCRIBING THE SETTINGS - MALTA The weather was very sunny, but Lily was sad because she was alone. The colourful birds were singing and the sky was blue. One day Lily set off for a walk in the sky forest. Then, she sat down and heard a bee. Then, she saw lovely flowers and they smelt like strawberries. After that, she went home and she went to sleep. She dreamt that her daddy was with her. Tonton put Lily up in the sky and she saw a beautiful rainbow and she saw the dragon sceptre. So she was very excited. The dragon sceptre sucked her up. She flew away in the breezy wind and ended up back in the sky forest. She saw the leaves falling down and the raining fruits. After that, she saw a sparkly jam river. Suddenly, everything became black.

PLOT- CZECHIA She still sleeps. She wakes up from a dream and lies on the grass. She sees a God, he advices her. She meets Tonton and she fights. She sees a dark house. She goes inside, she falls in a hole. She finds a torch and stairs to the labyrinth. In the labyrinth, thereÂ´s a magic box.

PROBLEM- CROATIA She opened the magic box and found a map, a clock, a glove with a red ribbon, a wardrobe, a magic clock, a compass, a magic wand and a horse. The horse showed her the way, but in each case she decided to take the whole box with her. Horse brought her to the captive father. Both of them were very happy. At the exit of the labyrinth, Tonton was angry. Lily told Tonton that she was not afraid of him and she took a wardrobe from the magic box and she and her father went in.

SOLUTION- CROATIA Tonton was confused and even more angry, because Lily outwitted him. So, lightning, wind and thunder came out of his wrath in the sky. The angrier it was, the wind was stronger and he was thrown into the Star prison where he was forever leaking and could not get rid of it. Lily and her father were already safe. They returned to their kingdom â&amp;#x20AC;&amp;#x153;Sky worldâ&amp;#x20AC;? where their people welcomed them because they were free of Tonton&#39;s authority.

CONCLUSION – SLOVAKIA However, Tonton escaped from the Star prison. He attacked the Sky world. He destroyed down the buildings and mutilated people. When he wasn´t looking, Lily caught the dragon sceptre and attacked him. He was very strong, but the magic dragon sceptre was stronger. Lily defeated Tonton and she won. She left Tonton in that magic labyrint and went home with her father.

The story of Lili and Tonton