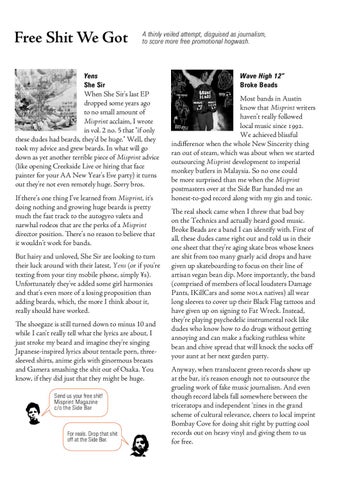 Free Shit We Got

When She Sir&#39;s last EP dropped some years ago to no small amount of Misprint acclaim, I wrote in vol. 2 no. 5 that &quot;if only these dudes had beards, they&#39;d be huge.&quot; Well, they took my advice and grew beards. In what will go down as yet another terrible piece of Misprint advice (like opening Creekside Live or hiring that face painter for your AA New Year&#39;s Eve party) it turns out they&#39;re not even remotely huge. Sorry bros. If there’s one thing I’ve learned from Misprint, it&#39;s doing nothing and growing huge beards is pretty much the fast track to the autogyro valets and narwhal rodeos that are the perks of a Misprint director position. There’s no reason to believe that it wouldn’t work for bands. But hairy and unloved, She Sir are looking to turn their luck around with their latest, Yens (or if you&#39;re texting from your tiny mobile phone, simply ¥s). Unfortunately they&#39;ve added some girl harmonies and that&#39;s even more of a losing proposition than adding beards, which, the more I think about it, really should have worked. The shoegaze is still turned down to minus 10 and while I can&#39;t really tell what the lyrics are about, I just stroke my beard and imagine they&#39;re singing Japanese-inspired lyrics about tentacle porn, threesleeved shirts, anime girls with ginormous breasts and Gamera smashing the shit out of Osaka. You know, if they did just that they might be huge. Send us your free shit! Misprint Magazine c/o the Side Bar

For reals. Drop that shit off at the Side Bar.

Most bands in Austin know that Misprint writers haven’t really followed local music since 1992. We achieved blissful indifference when the whole New Sincerity thing ran out of steam, which was about when we started outsourcing Misprint development to imperial monkey butlers in Malaysia. So no one could be more surprised than me when the Misprint postmasters over at the Side Bar handed me an honest-to-god record along with my gin and tonic. The real shock came when I threw that bad boy on the Technics and actually heard good music. Broke Beads are a band I can identify with. First of all, these dudes came right out and told us in their one sheet that they’re aging skate bros whose knees are shit from too many gnarly acid drops and have given up skateboarding to focus on their line of artisan vegan bean dip. More importantly, the band (comprised of members of local loudsters Damage Pants, IKillCars and some nola natives) all wear long sleeves to cover up their Black Flag tattoos and have given up on signing to Fat Wreck. Instead, they’re playing psychedelic instrumental rock like dudes who know how to do drugs without getting annoying and can make a fucking ruthless white bean and chive spread that will knock the socks off your aunt at her next garden party. Anyway, when translucent green records show up at the bar, it&#39;s reason enough not to outsource the grueling work of fake music journalism. And even though record labels fall somewhere between the triceratops and independent ‘zines in the grand scheme of cultural relevance, cheers to local imprint Bombay Cove for doing shit right by putting cool records out on heavy vinyl and giving them to us for free. 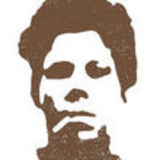