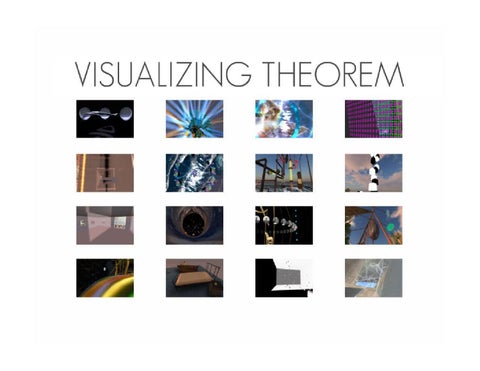 There is a long tradition of one art form inspiring another, whether it be a version of the ancient Greek practice of ekphrasis (the written or dramatic description of a piece of visual art), music based on a story, sculpture about a poem, or a painting of music. What we have in &quot;Visualizing Theorem&quot; are a collection of diverse virtual art pieces that stem from the tracks from Indaba Music&#39;s album &quot;Theorem,&quot; itself inspired by concepts from mathematics and the sciences. This is truly a transdisciplinary, collaborative, international, and multi-media project. The pieces that comprise &quot;Visualizing Theorem&quot; show the depth and breadth of some of the many kinds of virtual art. They run the gamut from abstract, minimalist pieces to neo-realist works, and from avatar performance art to virtual exhibition of digital photography. There are pieces that use scripts to make use of the physics of the virtual world, or other mutable properties of objects, or take advantage of the &quot;natural&quot; landscape of the virtual world by the artist choosing to place the piece in the water, on land, or in the air. Some are interactive installations where your avatar&#39;s presence or actions change the look, sound, or movement of the objects and their environment, and some pieces animate your avatar when you click on them, giving you a sudden experience that plunges you into the artwork and makes you part of the installation. This goes beyond what we can experience even in actual world installation art, and although we only see it on a computer screen and hear it through speakers or headphones, it is a glimpse of the augmented reality that will become an increasingly accessible medium in the future. That there is a group show of such diverse and international artists visualizing this extraordinary album, which already crosses disciplines in how it uses music to explore concepts of science and math is fitting. The album was created collaboratively, through technology, using the internet to connect people separated by distance. A virtual world like Second Life also fosters collaboration, and connects artists with each other, whether to work directly with each other as partners, or in the artists&#39; groups that thrive in the Second Life community in which many of the participants in this show are involved, and through which many of us have collaborated on other projects in the past. And when the individual installations are brought together in a show like this, they form their own kind of collaboration as well, commenting on each other, providing counterpoint and harmony. When people from all over the world, separated by place and circumstance, represented by avatars, see and interact with the art we bring here, then they participate in a collaboration as well, and together we shape the social and artistic experience of virtual art, and the virtual world. We connect with each other in this virtual world through shared experiences that transcend the written and verbal communication of chat as we visualize and realize our creativity and imaginations. Lori Landay, Ph.D. , Associate Professor of Cultural Studies, teaches Visual Culture and Interactive Media at Berklee College of Music. She is also L1Aura Loire in Second Life, and L1 Loire in other virtual worlds

The core idea I have about the work-collectively-relates to how our experiences and creative processes are both generative and community based in nature. We are constantly in a cycle of processing information and responding to it. Artists, however, both individually and as a community, do this with great skill and attention. So it is a natural process for artists to transform concepts, like theorem, or abstract ideas into visuals, sounds, and performance. Artists and musicians who are inspired by math and science is not a new idea. In fact, it just makes plain sense as both communities grapple with the ideas, realities, truths and possibilities in the world around them. At this juncture, we grapple now with plural worlds and plural identities where essentially the common denominator is the human behind the keyboard-and that is not a new idea either. Our individual and collective human presence remains the root of our experiences even though the medium we choose is technologically based. So too is the reading of and contextualizing of such work, based on our human reality as we intersect with technology. Creative idea making in the cognitive process is a beautiful thing in its own right. One can call it daydreaming. But when those creative ideas lead to action, their tangible expression is art. So I stand firmly to validate artists working in the digital realm that we have as equal footing in any realm because it is our action on our ideas which makes the art come alive. Virtual art-is-real art. I congratulate the artists, in this exhibit and throughout the “grid” who continue to make strides in a genre which is often challenged in the marketplace of creative ideas. Our work resides in the most visited and accessible gallery in the world: the internet. This exhibit is a very small example of our ability to communicate complex ideas one to another over great distances and cultures and share in the beauty of forward thinking creativity. I am truly thankful for the artists, participants, advisers, mentors, hosts, musicians and friends who came together to contribute to and collaborate on this project. I hope the work continues to propel thought, discussion and inspiration. Misprint Thursday, Curator-Visualizing Theorem April 2, 2011

ABOUT THE CATALOG This catalog serves as an overview of the art in the show. To see the show in “person” one needs to make a free account on Second Life and teleport to this location. http://slurl.com/secondlife/UTSA%20Roadrunner%20III/167/206/30 At the exhibit there are further details about the artists and their work.

“I see myself as a Resident, not a tourist within the Virtual Worlds I inhabit. I believe Virtual Worlds are media – and what an event/phenomenon – to be able to live, work and research in one&#39;s chosen medium.” pixel Reanimator

“The experience of making art from music inspired by math and science made me aware of how much my work has evolved into a fascination with light as a source of power and beauty.” Sledge Roffo

“My art is a more happy happy style, but I also get my inspiration from real world.” Betty Tureaud”

“I clearly remember thinking that irrationality is exactly in conflict with the whole mathematical enterprise, and the idea that irrational numbers could be useful in solving certain kinds of math problems brought the entire enterprise into question - at least in my 12 year old mind.” Oberon Onmura

“I am fascinated by the cinematic nature of the medium especially with the use of translucent layers stacked and often moving. One begins to see a visual shifting ground which is not quite ephemeral but leads to a kind of beauty and sometimes disorientation.” Misprint Thursday

“Prime Radiant&#39; extends this technique into color theory, using the properties of chroma, luminance and transparency possible on a computer display to mix and blend spectral colors over time.” Miso Susanowa

“I chose this track because of my love for subatomic particles along with the acceleration of such positrons to hit a wall, so to speak, and create gamma rays.” Penumbra Carter

“My artwork represents the building blocks in the virtual (digital) world. Similar to the physical world, digital building blocks are used to generate sequences of binary numbers” Binary Quandry

â&amp;#x20AC;&amp;#x153;These works suggest that technologies such as embodiment, renewable energy, biotechnology or virtual + augmented realities are a vital step to completing the coming merger of nature and technology.â&amp;#x20AC;? Formatting Heliosense

“In this piece, this quest has been inverted: you do not have to seek the cosmos; rather the moons seek -you-.” Douglas Story

“For me, I felt a sense of self reference in this paradox and something of the infinite. Hence, circles, drawn out of our heads and mirroring back. The compass draws images and words which can be read either way.” Blue Tsuki

“I also gave the lodestones greater power than they actually have, one to produce &#39;synthesized tones&#39; when struck.” Dekka Raymaker

“Because some of the limitations of money and gravity are removed, very ambitious sculptural pieces can be attempted and viewed. This makes this art form unique.” Scarp Godenot

“The water and the boat represent the subconscious mind, always there, waiting to drift us away. the bells, echoed in the music represent the small assurance, a reminder that none of this is real, anything is possible and that your dreaming is allowed to break the boundaries our souls would rather prohibit.” AM Radio

“This video is screened now inside the installation on two walls and its effect is quite irritating, especially during the black sequences when one is not sure about which cubes are real and which ones are only screened.” Pinkpink Sorbet

“Hermétique Garage in suspension of frozen time. Space is bending during it&#39;s acceleration towards the speed of light. A ladder at first to big is deconstructing to persuade it&#39;s goal to fit the GH (Garage Hermétique)” Werner Kurusowa

Exhibit Catalog Designed and Published by Misprint Thursday 2011 ABOUT THE CATALOG This catalog serves as an overview of the art in the show. To see the show in â&amp;#x20AC;&amp;#x153;personâ&amp;#x20AC;? one needs to make a free account on Second Life and teleport to this location: http://slurl.com/secondlife/UTSA%20Roadrunner%20III/167/206/30 At the exhibit there are further details about the artists and their work. 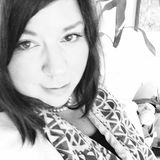