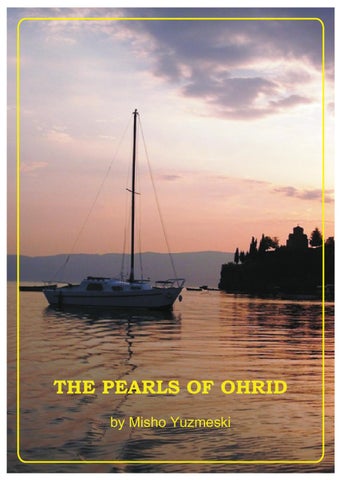 THE PEARLS OF OHRID by Misho Yuzmeski

THE PEARLS OF OHRID Text & Photographs by

The very idea of describing the splendors of Lake Ohrid, or those of the city of Ohrid, creates a dilemma as well about how to end the story. The beginning could be set anywhere, but the endâ&#x20AC;Ś? And, after all, is it possible for the story of Ohrid to have an end? In any case, let us start it somewhere! As a result of tectonic activity some four million years ago the lake of Ohrid was born. One of the finest and most wonderful achievements of nature. A precious jewel in the crown of Macedonia, of the Balkans and of Europe. A lake which attracts and inspires like no other. Among the most delightful moments of any visit to Macedonia. From the first encounter, visitors cannot conceal their delight at the clean and clear waters that act as a magnet, calming them and eventually drawing them back again. The first encounter inevitably invites the next visit, which seems to repeat itself over and over. Many secrets concerning the creation and ongoing evolution of the lake have been solved and over time that knowledge is supplemented by new findings. The explanation for the mysterious appeal of the lake perhaps can only be found in our own essence. The waters of Lake Ohrid (with depths of 300 m. and transparency of 21 m.) are inhabited by a remarkable variety of animal life, and many of these species are uniquely native. They represent a rare natural wealth, which at the same time provides answers to many questions concerning the evolution of the underwater world and biological processes of the past. It is a great privilege to be living on the shores of Lake Ohrid, and a privilege as well to be responsible for and to pass on that responsibility to future generations. What was achieved in the past must be protected and advanced for the benefit of the distant future, so that future generations, too, can enjoy the splendors of our world. In the effort to protect Lake Ohrid, Macedonia did not go it alone. In more recent times efforts to protect the lake have included many foreign governments and NGOâ&#x20AC;&#x2122;s. Thus, Germany made a donation of millions of marks, while Switzerland provided a vessel specifically designed for research work on the lake. It is also pleasing to note that Albania, which has possession of one third of the lake, has made joint protection of our common natural heritage the highest priority.

It seems that nature in this part of the world has been particularly blessed. This bounty of nature does not end with just the lake. Right by the lakeside rise tall mountains, which make the lake appear deeper, more idyllic, more stunningâ&#x20AC;Ś And, at the same time, they lead to the question: would this lake be as beautiful without them, without the mountains? The tallest and highest peak is Mount Galichitsa, which separates Lake Ohrid from the smaller, though no less beautiful, Lake Prespa. The peaks of Mount Galichitsa, over 2000 m. in height, are reflected in both lakes and reluctantly shed their snow mantle in May, sometimes waiting as late as June. As seen from the shores of the lake, Galichitsa appears forbiddingwild and inaccessible. But only at first encounter! Once you have hiked up, the mountain reveals its full splendor that draws you in to a world from long ago; a world that you had imagined only existed in your dreams. When strolling over the slopes or peaks of Galichitsa, it is hard to say what is more beautiful or more attractive. Everywhere you turn your eyes are greeted by views that stir your imagination. Serenity and silence surround you, nestling into your soul and bringing delight and calm. The question asks itself: if there ever was a Biblical paradise, was not Galichitsa part of it? The rich diversity of plant and animal life, caves and striking landscapes more than justify the decision to make Galichitsa a national park of Macedonia in 1958. Ones sense of time is skewed here. To make sense of it is difficult. Who can say when the first human eye gazed upon this earthly paradise and decided to possess it and to admire and live in its midst. In any event, it must have been a very long time ago. Archaeological research provides evidence of thousands of years of human presence and activity here. We can only imagine how a lonely hunter (or a larger group) wandering in search of food, discovered this area, deciding to make this heavenly parcel of the world their home, settling in for a long stay and enhancing the beauty of the place as well.

Along with the bounty of nature, it seems that mankind has striven with all its skills and talent for perfection. The human spirit has asserted itself here, stirred and driven by a love for the beautiful, to make the beautiful even more beautiful. Therefore, everywhere around Lake Ohrid has been ornamented with precious pearls of beauty, products of the artistic spirit of mankind. The artistic work enriches and amplifies the bounty of nature. A developed sense of the artistic is evident over a great span of time and space around Lake Ohrid. The golden masks, like many other artifacts discovered in the necropolis of Trebenishta, are a prime example confi?ming this assertion. But, they are not the beginning, nor anywhere near the end of the journey of mankind on its path to spiritual perfection. Trebenishta is but one more glittering moment on the long road to maturity of the arts and the human spirit, a road, which can only be measured in centuries and thousands of years, a road which appears to be endless! Every day and every century has added something new to the cultural treasures of Ohrid. As much as every conqueror destroyed or took away those riches, in the end, the conquerors passed on, while the native people stayed on, the legitimate heirs of their native land, to continue crafting for themselves, and for the others, as well. Many well-known and unknown citizens, patrons of Ohrid and its arts, found a way to leave their mark in their time; people who knew how and what to contribute. The builders would build remarkable temples, which later would be decorated by both well-known (to us) and unknown artists, as the cityâ&#x20AC;&#x2122;s workshops created countless works of art. The Archbishops of Ohrid as well as many prominent citizens donated a portion of their material riches to Ohrid, showing in this way their great respect not only for God, but for talent and beauty, as well. Thus, a noble man named Progon Zgur, for example, as proof of his faith and love for God, in 1295 AD had the Church of Virgin Mary Perivleptos erected, one of the most important and most beautiful monuments of Byzantine and medieval architecture and religious art. But what about St. Sophia, St. John of Kaneo, or St. Naumâ&#x20AC;Ś?

Where to begin and where to end? These pearls of mediaeval architecture and religious art, woven into and atop older civilizations and further enhanced by achievements of later periods as well, surround and embrace the lake. They shine with a divine splendor that radiates out into the lake, Macedonia, and the world! If the future is a logical extension of the present, then the previous development of Ohrid also shows the way this city will take. If nature has finished its work (!?), something beyond the scope of humanity, the human creativity that is present today will remain present till the end of human time! Most likely as long as mankind persists in its quest for perfection! It seems that natural splendors and the artistic achievements of modern, ancient and prehistoric civilizations co-exist here as nowhere else on earth. So many treasuries on such a small portion of the earth! Magnificent mountains, a gorgeous lake, an ancient city! Pearl next to pearl, and which is the more beautiful? Many books have been written and many words of praise have been spoken about the city and the lake of Ohrid. As much as in the past, the city and the lake of Ohrid today stand as an inspiration for artists of all kinds, though no single artist has ever fully succeeded in conveying their grandeur. Therefore, the best you can do is to see them with your own eyes and experience them through your own spirit. Somewhere here must be the end of our story about the pearls of Ohrid. Entirely conscious of the fact that our story is somehow incomplete, we are ending our journey through the past and into our own times, through the natural splendor and cultural treasures of Macedoniaâ&#x20AC;&#x2122;s, Europeâ&#x20AC;&#x2122;s and the worldâ&#x20AC;&#x2122;s Ohrid. Let the end of the story be just the end of the story! Let it be just a beginning for many new acquaintances and friendships, a beginning of a new world, a beginning of the common journey toward perfection. 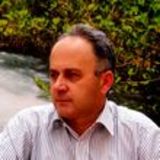 The Pearls of Ohrid

A story about the city and the lake of Ohrid.

The Pearls of Ohrid

A story about the city and the lake of Ohrid.