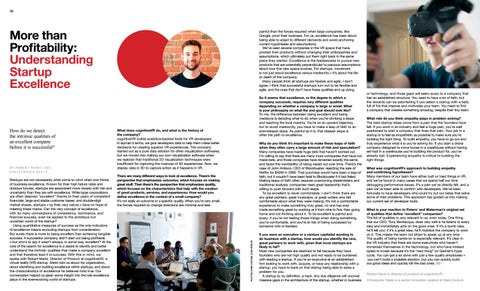 BY ROBERT MERKI AND CHRISTOPHER NEELS

Startups are not necessarily what come to mind when one thinks of business excellence. Known for their high failure rates and dubious futures, startups are associated more closely with risk and uncertainty than they are with excellence. While large corporations are often deemed “excellent” thanks to their years of consistent financials, large and stable customer bases, and double-digit market shares, startups – by their very nature – have no hope of meeting these marks. Can the very concept of excellence, with its many connotations of consistency, dominance, and financial success, even be applied to the ambitious but uncertain world of the startup? Using quantitative measures of success as the only indicators of excellence means excluding startups from consideration. But surely there is more to being excellent than achieving tangible success. A successful company didn’t start out being profitable – but who’s to say it wasn’t always, in some way, excellent? At the core of the search for excellence is a desire to identify and better understand the intrinsic qualities that make a company excellent and that therefore lead it to success. With this in mind, we spoke with Robert Merki, Director of Product at cognitiveVR, a virtual reality (VR) startup. Merki told us about his organization, about identifying and building excellence within startups, and about the characteristics of excellence he believes hold true. Our conversation helped us glean some insight into the role excellence plays in the ever-evolving world of startups.

So it seems that excellence, or the degree to which a company succeeds, requires very different qualities depending on whether a company is large or small. What is your philosophy on what the end goal should look like? To me, the difference between being excellent and being mediocre is deciding what to do when you’re climbing a slope and reaching the local maxima. You’re on an upward trajectory, but to avoid mediocrity, you have to make a leap of faith to an ever-steeper slope. As painful as it is, that steeper slope is often the path to excellence.

What does cognitiveVR do, and what is the history of the company? cognitiveVR builds analytics-backed tools for VR developers. In layman&#39;s terms, we give developers data to help them make better decisions for creating superior VR experiences. The company started out as a pure data solution for other visualization softwares, but we moved into making our own visualization software when we realized that traditional 2D visualization techniques were insufficient for capturing the nuances of 3D experiences. Now, we display data in 3D to capture action as it happens in VR.

Why do you think it’s important to make these leaps of faith when they often carry a large amount of risk and speculation? Many companies have made huge bets that haven’t worked out. I’m willing to say that there are many more companies that have not made bets, and those companies have remained exactly the same and faced the inevitability of being wiped out over time. There’s the case of John Antioco, CEO of Blockbuster, rejecting the sale of Netflix for $50M in 2000. That purchase would have been a leap of faith, but it wouldn’t have been fatal to Blockbuster if it had failed. Making leaps of faith often requires overcoming stakeholders and traditional analysis; companies need great leadership that’s willing to push forward with such leaps. To be excellent is never comfortable. I don’t think there are any great painters, great musicians, or great writers who felt comfortable about what they were making. It’s not a comfortable experience to make something truly great; no one has ever made something great by working at it from nine to five, then going home and not thinking about it. To be excellent is painful and scary; if you’re not feeling those things when doing something, you’re comfortable, and you’re at risk of being surpassed by someone who is fearless.

There are many different ways to look at excellence. There’s the perspective that emphasizes outcomes, which focuses on making great stuff. Then there’s the perspective that emphasizes quality, which focuses on the characteristics that help with the creation of great products, services, and experiences. How would you define excellence in the context of a small company? It’s not really an outcome or a specific quality. When you’re very small, the forces required to change directions are minimal and less

How do we detect the intrinsic qualities of an excellent company before it is successful?

painful than the forces required when large companies, like Google, pivot their business. For us, excellence has been about being able to adapt to different demands and avoid anchoring current hypotheses and assumptions. We’ve seen several companies in the VR space that have pivoted their products without changing their philosophies and assumptions, which ultimately put them right back in the same place they started. Excellence is the fearlessness to pursue new products that are potentially perpendicular to previous assumptions about how this new space evolves. For startups, movement is not just about excellence versus mediocrity – it’s about the life or death of the company. Many people think all startups are flexible and agile. I don’t agree. I think that successful startups turn out to be flexible and agile, and the ones that don’t have these qualities end up dying.

If you were an executive or a venture capitalist wanting to do business with a startup, how would you identify the rare, great partners to work with, given that most startups are likely to fail? Most new companies are destined to fail because they have founders who are not high quality and not ready to be burdened with leading a startup. If you’re an executive at an established firm looking to work with, acquire, or have any relationship with a startup, you have to bank on that startup being able to solve a problem for you. A startup is, by definition, a hack. Any due diligence will uncover massive gaps in the architecture of the startup, whether in business

or technology, and those gaps will seem scary to a company that has an established structure. You need to have a lot of faith, but the rewards can be astonishing if you select a startup with a belly full of fire that inspires and motivates your team. You need to find a company that creates something amazing, despite their tiny team. What role do you think empathy plays in problem solving? The best startup ideas come from a pain that the founders have felt. If you work in an industry and feel a huge pain, you’re well positioned to start a company that fixes that pain. Your job in a startup is to feel as empathetic as possible to make sure you’re building the right thing. To build empathy, you have to go out and truly experience what it is you’re solving for. If you start a drone company designed to move boxes in a warehouse without having set foot in a warehouse you’re building the product for, you’ve already lost. Experiencing empathy is critical to building the right things. What was cognitiveVR’s approach to building empathy and confirming hypotheses? Many members of our team have either built or tried things in VR, and we’ve found in many cases that we spend half our time debugging performance issues. It’s a pain we’ve directly felt, and a pain we’ve been able to confirm with developers. We’ve been fortunate to have developers who could try out our betas that solve some of their problems. This approach has guided us into making our current set of developer tools. What is your reaction to Peters’ and Waterman’s original set of qualities that define “excellent” companies? The list of qualities is very relevant to us, even today. One thing that our CEO, Tony Bevilacqua, does very well is he listens to every idea and immediately acts on the good ones. If it’s a dumb idea, he’ll tell you; if it’s a great idea, he’ll mobilize the company to work on it. This makes the team not afraid to speak up at any time. The quality of being hands-on is especially relevant. It’s clear in the VR industry that there are some executives who haven’t immersed themselves in the technology, but who have instead opted to invest because it’s the “next thing” on Gartner’s hype cycle. You can get a lot done with just a few quality employees – you can’t build a scalable solution, but you can quickly build out good ideas and quickly kill the bad ones. //// Robert Merki is director of product at cognitiveVR. Christopher Neels is a senior innovation analyst at Idea Couture.

Taking inspiration from Peters' and Waterman's iconic 1982 book In Search of Excellence, this issue of MISC examines the things that drive us to achieve excellence – and whether or not it’s even something we should be striving for. We spoke with leaders from Kickstarter, Dyson, Patagonia, and other preeminent organizations to learn how they currently define the term and what they imagine for the future. We hope this issue encourages you and serves as a call to action for your company to rethink what excellence really means. 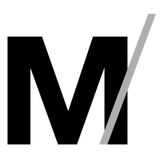