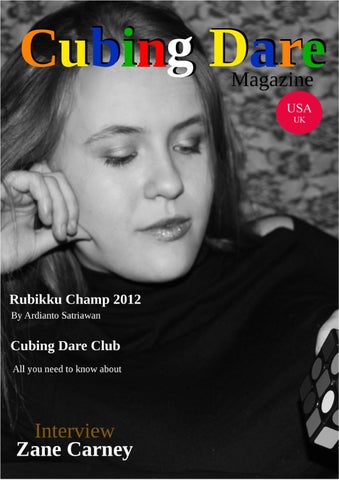 KALINA BRZEZINSKA One of the most desired female speedcubers

6 CUBING DARE CLUB Partipate with us!!

Thank you for believing in us! Cubing Dare loves you!

The founder of Rubikku, Didik Danardono gave speech about how he created Rubikku. There are 2 big "Nasi Tumpeng" in front of him

Aldo Feandri, The World Champion 2011 in 4x4 Blindfolded on one of his attempt

In the above photo: Kirk Nicklaus Manibuy, one of the competitor attempting in 3x3 Finals. In the below photo: The situation of scramble and score足taker table.

UBING DARE: When did you start cubing? and which method did you use? ZANE CARNEY: I first learnt to solve the cube in 2008 with a layer by layer method that came with the Rubik’s cube. I didn’t take a real interest in cubing until mid 2009. CD: Who inspired you as a speedcuber? ZC: No one really inspired me to start speedcubing, but once I got into speedcubing I suppose Erik Akkersdijk’s solves motivated me to get faster. Chris Hardwick was the one who inspired me to learn big cubes BLD. CD: What was your time when you first solve the 3x3x3? ZC: My first solve without looking at the instructions was 3­4 minutes. CD: Why are you so addicted to Blindfolded solving? When I was new to cubing, I was convinced that solving a cube BLD was well beyond my grasp. I think this has given me more of an appreciation for the event. Other than that, I find the mnemonic (memory) systems interesting and useful, since they 8

can be applied to non­cubing situations. Commutators also make blindfold solving more enjoyable because they’re an intuitive approach to solving the cube. CD: What was the time for your first bld success and how many cubes did you solve for your first multi attempt? ZC: After 2 or 3 DNFs, I got a 13 minute success (8 minute memo). My first multi attempt was a successful 2/2, I can’t remember the time, somewhere around 20 minutes. CD: According to your introduction about yourself, you have many favorite cubers and there are too many to list, but Who will be FIRST in your mind?

CD: How often do you run and how many kilometers? ZC: I don’t run that much, I use to jog for maybe 15 minutes each night (so that’s only a couple of kilometres). Recently I replaced jogging with bike riding.

Name : Zane. Nickname: Don't really have one. Born in Geelong, Australia Study @ Oberon High School. Hobby ( hobbies): Getting outside and learning about science. Favorite color(s) : Don't have one. Favorite Cuber(s): Anyone who's friendly, I don't care how fast they are. Favorite event(s): 3x3 BLD and 4x4 speed solving. Favorite food(s): Whatever I feel like at the time. Restaurant : McDonald's.

ZC: I’m going to say Chris Hardwick. He inspired, motivated and helped me soooo much with BLD. I finally met him in person at WC 2011, he’s such awesome guy. CD: What is your target with multi bld/ how many cubes for this year? ZC: I’m in year 12 now and as a result I’m not practising much at all. For my next attempt I’ll probably be trying 25 cubes, maybe 27 if I feel confident. CD: Who do you think will break your 23/25 cubes? and why do you think so? ZC: I think the next multi WR holder could be Marcell Endrey, Marcin Kowalczyk or Daniel Sheppard just to name a few. They are all certainly capable of attaining WR scrores. CD: When was the first time you went fishing alone and do you still remember what kind of fish you caught? ZC: I can’t remember the first time I went fishing alone, probably when I was around 6. I can still vaguely remember the first fish I caught, it was a Murray Cod about 15 cm long and I was 4 or 5 10

CD: When do you think your dream to visit North America will be happen? ZC: I wouldn’t call it a dream , but I don’t expect it to happen any time soon (if it ever happens). I mostly want to visit the Barringer Crater in Arizona and Yellowstone National Park. CD: What is the biggest of your scary experiences? ZC: I can’t recall having an unforgettably scary experi­ ence, so it’s difficult to

single out a particular moment. It probably would’ve taken place somewhere high, where I’ve got into that awkward position where no matter how you move, you feel like you’re going to lose your balance and fall.

(21­3/20­4) In the first week of March 2012, under the influence of the Venus­Saturn opposition, your couple life might undergo a difficult, test­like period or at least a not very comfortable situation. It's like fate dared you to make a decision or a choice. Unfortunately, not in the direction you'd like to, but rather in a practical and dull direction.

(22­6/22­7) The first days of March 2012 will be emotionally loaded. You don't have to yield to instincts, because you could have exag­ gerated reactions, damag­ ing your couple's harmony. Try not to expose yourself, but, at the same time, don't pay too much attention to Taurus anything. Some things that (22­4/21­5) March 2012 could be the now seem painful could most fulfilling and have been ignored some interesting month of the other time. year. On March 5th 2012, Venus, the planet of Leo couples and seduction, will (23­7/23­8) enter Taurus, where it'll On the first days of March stay until April 3rd. Venus 2012 the probability of bad news or will enhance not only your some unpleasant discussions will charm, but your appetite for love and flirts as well. be rather high. It won't be a period to Affection, sensuality and favorable sentimental trips either. sexuality will get stronger. Sentimental opportunities Things will turn out differently from what you will come more often. hoped for, so you'd better postpone for a while. Gemini (22­5/21­6) March won't find you in the best sentimental shape: the first days of March 2012 will be affected by the effects of a Venus­ Saturn opposition which will influence your house of love. A fight between two lovers? A date that went wrong? Sexual frustration? Regardless of the reason for your dissatisfaction, it seems to be related to free love rather than to long­term relationships.

(24­8/23­9) With the Sun in your house of couples, there'll be higher sentimental avai­ lability and a lot to give; in your turn, you'll stimulate your partner's capacity to offer. There'll be optimistic expectations regarding a possible sentimental trip or a long­distance love story. Money, trips, studies and collaborations will be the main criteria in March 2012.

(22­12/20­1) The configuration in March 2012 will be excellent for single people that now have bigger chances to meet their half, excellent for lovers that can enjoy a period they'll remember for a long time ahead, excellent for those who have a steady relationship because they will have the opportunity to light it up again.

(24­9/23­10) The day of March 1st 2012 will put you at an advantage. The spring symbol you've received/ offered will be the mes­ senger of some beautiful moments you two will share. Venus, which will be in your house of couples until March 5th 2012, will bring tenderness and Aquarium seduction. (21­1/19­2) The ruler of your house of Scorpio love will make a (24­10/22­11) conjunction with Uranus Apart from the first days of that could bring people you the month, when the wouldn't have thought of in climate is a bit tense, your way. Dates, news, March 2012 will offer you phone calls or surprise a superb relational mails would perfectly fit panorama. With both the nature of the benefic planets ­ Venus and conjunction. So would the Jupiter ­ in your house of trips you'll have to take couples, love or marriage unexpectedly to get closer will go through a happy to the person you love. Pay period, full of attention though, because accomplishments and all this can have a rebound satisfaction. effect, as they will be marked by equally Sagittarius unexpected incidents! (23­11/21­12) Is it excitement, challenges Piscies and adventure that you (20­2/20­3) want? In March 2012 you For a part of Pisces people, can have them. Because March 2012 will be the Mercury is conjunct with month of the most Uranus in Sagittarius' beautiful conversations, house of love and messages, dates or walks. sexuality, March will be a Sentimental fulfillment very spicy month! will be connected to trips, Especially since Mercury communication or is the ruler of Sagittarius's intellectual preoccupations. house of couples. What Money or material issues does "spicy" refer to? Well, might influence the sometimes it'll be milder, relationship.