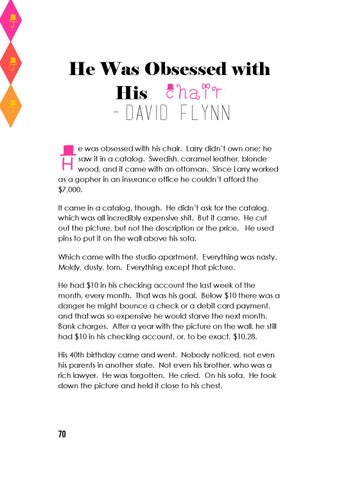 He Was Obsessed with His Chair

e was obsessed with his chair. Larry didn’t own one; he saw it in a catalog. Swedish, caramel leather, blonde wood, and it came with an ottoman. Since Larry worked as a gopher in an insurance office he couldn’t afford the $7,000. It came in a catalog, though. He didn’t ask for the catalog, which was all incredibly expensive shit. But it came. He cut out the picture, but not the description or the price. He used pins to put it on the wall above his sofa. Which came with the studio apartment. Everything was nasty. Moldy, dusty, torn. Everything except that picture. He had $10 in his checking account the last week of the month, every month. That was his goal. Below $10 there was a danger he might bounce a check or a debit card payment, and that was so expensive he would starve the next month. Bank charges. After a year with the picture on the wall, he still had $10 in his checking account, or, to be exact, $10.28. His 40th birthday came and went. Nobody noticed, not even his parents in another state. Not even his brother, who was a rich lawyer. He was forgotten. He cried. On his sofa. He took down the picture and held it close to his chest.