Minus 9 Squared Anthology Volume One 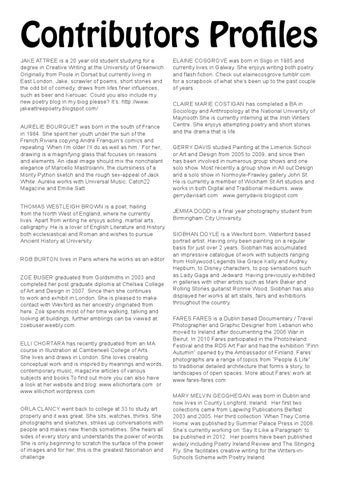 Contributors Profiles JAKE ATTREE is a 20 year old student studying for a degree in Creative Writing at the University of Greenwich. Originally from Poole in Dorset but currently living in East London, Jake, scrawler of poems, short stories and the odd bit of comedy, draws from lifes finer influences, such as beer and Kerouac. Could you also include my new poetry blog in my biog please? It’s: http://www. jakeattreepoetry.blogspot.com/ AURÉLIE BOURGUET was born in the south of France in 1984. She spent her youth under the sun of the French Riviera copying André Franquin’s comics and repeating ‘When I’m older I’ll do as well as him.’ For her, drawing is a magnifying glass that focuses on reasons and elements. An ideal image should mix the nonchalant elegance of Marcello Mastroianni, the clumsiness of a Monty Python sketch and the rough sex-appeal of Jack White. Aurélie works with Universal Music, Catch22 Magazine and Emilie Satt THOMAS WESTLEIGH BROWN is a poet, hailing from the North West of England, where he currently lives. Apart from writing he enjoys acting, martial arts, calligraphy. He is a lover of English Literature and History both ecclesiastical and Roman and wishes to pursue Ancient History at University. ROB BURTON lives in Paris where he works as an editor ZOE BUSER graduated from Goldsmiths in 2003 and completed her post graduate diploma at Chelsea College of Art and Design in 2007. Since then she continues to work and exhibit in London. She is pleased to make contact with Wexford as her ancestry originated from here. Zoë spends most of her time walking, talking and looking at buildings; further amblings can be viewed at: zoebuser.weebly.com. ELLI CHORTARA has recently graduated from an MA course in Illustration at Camberwell College of Arts. She lives and draws in London. She loves creating conceptual work and is inspired by meanings and words, contemporary music, magazine articles of various subjects and books.To find out more you can also have a look at her website and blog: www.ellichortara.com or www.elllichort.wordpress.com ORLA CLANCY went back to college at 33 to study art properly and it was great. She sits, watches, thinks. She photographs and sketches, strikes up conversations with people and makes new friends sometimes. She hears all sides of every story and understands the power of words. She is only beginning to scratch the surface of the power of images and for her, this is the greatest fascination and challenge.

ELAINE COSGROVE was born in Sligo in 1985 and currently lives in Galway. She enjoys writing both poetry and flash fiction. Check out elainecosgrove.tumblr.com for a scrapbook of what she’s been up to the past couple of years. CLAIRE MARIE COSTIGAN has completed a BA in Sociology and Anthropology at the National University of Maynooth.She is currently interning at the Irish Writers’ Centre. She enjoys attempting poetry and short stories and the drama that is life. GERRY DAVIS studied Painting at the Limerick School or Art and Design from 2005 to 2009, and since then has been involved in numerous group shows and one solo show. Most recently a group show in All out Design and a solo show in Normoyle-Frawley gallery John St. He is currently a member of Wickham St Art studios and works in both Digital and Traditional mediums. www. gerrydavisart.com www.gerrydavis.blogspot.com JEMMA DODD is a final year photography student from Birmingham City University. SIOBHAN DOYLE is a Wexford born, Waterford based portrait artist. Having only been painting on a regular basis for just over 2 years, Siobhan has accumulated an impressive catalogue of work with subjects ranging from Hollywood Legends like Grace Kelly and Audrey Hepburn, to Disney characters, to pop sensations such as Lady Gaga and Jedward. Having previously exhibited in galleries with other artists such as Mark Baker and Rolling Stones guitarist Ronnie Wood, Siobhan has also displayed her works at art stalls, fairs and exhibitions throughout the country.

FARES FARES is a Dublin based Documentary / Travel Photographer and Graphic Designer from Lebanon who moved to Ireland after documenting the 2006 War in Beirut. In 2010 Fares participated in the PhotoIreland Festival and the RDS Art Fair and had the exhibition “Finn Autumin” opened by the Ambassador of Finland. Fares’ photographs are a range of topics from “People &amp; Life” to traditional detailed architecture that forms a story, to landscapes of open spaces. More about Fares’ work at www.fares-fares.com MARY MELVIN GEOGHEGAN was born in Dublin and now lives in County Longford, Ireland. Her first two collections came from Lapwing Publications Belfast 2003 and 2005. Her third collection ‘When They Come Home’ was published by Summer Palace Press in 2008. She’s currently working on ‘Say It Like a Paragraph’ to be published in 2012. Her poems have been published widely including Poetry Ireland Review and The Stinging Fly. She facilitates creative writing for the Writers-inSchools Scheme with Poetry Ireland.

Minus 9 Squared Anthology Volume One

The first anthology of Minus 9 Squared after a long hiatus. Featuring poetry, prose and visual arts, the magazine showcases the brightest talent the country and beyond has to offer. Please feel free to leave a comment underneath telling us what you think. Tell your friends! 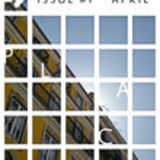