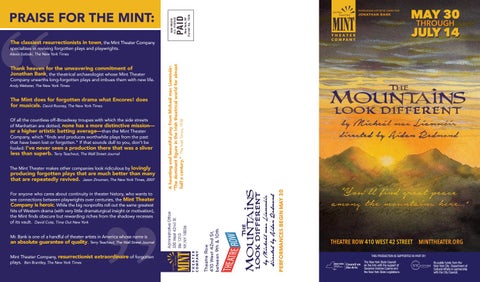 PRAISE FOR THE MINT:

The classiest resurrectionists in town, the Mint Theater Company

Of all the countless off-Broadway troupes with which the side streets of Manhattan are dotted, none has a more distinctive mission— or a higher artistic batting average—than the Mint Theater Company, which “ﬁnds and produces worthwhile plays from the past that have been lost or forgotten.” If that sounds dull to you, don’t be fooled: I’ve never seen a production there that was a sliver

The Mint Theater makes other companies look ridiculous by lovingly

producing forgotten plays that are much better than many that are repeatedly revived. Jason Zinoman, The New York Times, 2007

For anyone who cares about continuity in theater history, who wants to see connections between playwrights over centuries, the Mint Theater Company is heroic. While the big nonproﬁts roll out the same greatest hits of Western drama (with very little dramaturgical insight or motivation), the Mint ﬁnds obscure but rewarding riches from the shadowy recesses of its vault. David Cote, Time Out New York Mr. Bank is one of a handful of theater artists in America whose name is

The Mint does for forgotten drama what Encores! does for musicals. David Rooney, The New York Times

Company unearths long-forgotten plays and imbues them with new life.

Thank heaven for the unwavering commitment of Jonathan Bank, the theatrical archaeologist whose Mint Theater

A haunting and beautiful play from Micheál mac Liammóir: “The dominant ﬁgure in the Irish theatrical world for almost half a century.” The Irish Times, 1978

THEATRE ROW 410 WEST 42 STREET MINTTHEATER.ORG THIS PRODUCTION IS SUPPORTED IN PART BY: The New York State Council on the Arts with the support of Governor Andrew Cuomo and the New York State Legislature.

By public funds from the New York City Department of Cultural Affairs in partnership with the City Council. 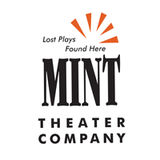