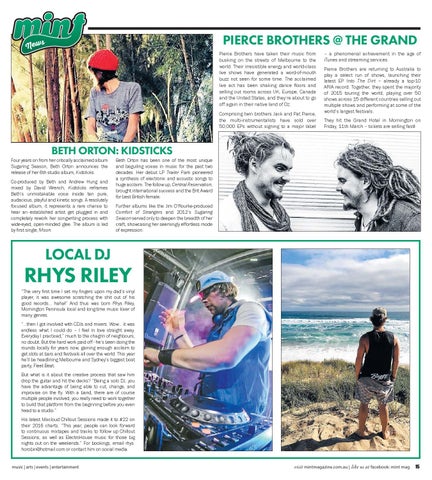 PIERCE BROTHERS @ THE GRAND Pierce Brothers have taken their music from busking on the streets of Melbourne to the world. Their irresistible energy and world-class live shows have generated a word-of-mouth buzz not seen for some time. The acclaimed live act has been shaking dance floors and selling out rooms across UK, Europe, Canada and the United States, and they’re about to go off again in their native land of Oz. Comprising twin brothers Jack and Pat Pierce, the multi-instrumentalists have sold over 50,000 EPs without signing to a major label

– a phenomenal achievement in the age of iTunes and streaming services. Pierce Brothers are returning to Australia to play a select run of shows, launching their latest EP Into The Dirt – already a top-10 ARIA record. Together, they spent the majority of 2015 touring the world, playing over 50 shows across 15 different countries selling out multiple shows and performing at some of the world’s largest festivals. They hit the Grand Hotel in Mornington on Friday, 11th March – tickets are selling fast!

Four years on from her critically acclaimed album Sugaring Season, Beth Orton announces the release of her 6th studio album, Kidsticks. Co-produced by Beth and Andrew Hung and mixed by David Wrench, Kidsticks reframes Beth’s unmistakable voice inside ten pure, audacious, playful and kinetic songs. A resolutely focused album, it represents a rare chance to hear an established artist get plugged in and completely rework her songwriting process with wide-eyed, open-minded glee. The album is led by first single, Moon.

Beth Orton has been one of the most unique and beguiling voices in music for the past two decades. Her debut LP Trailer Park pioneered a synthesis of electronic and acoustic songs to huge acclaim. The follow up, Central Reservation, brought international success and the Brit Award for best British female. Further albums like the Jim O’Rourke-produced Comfort of Strangers and 2012’s Sugaring Season served only to deepen the breadth of her craft, showcasing her seemingly effortless mode of expression.

“The very first time I set my fingers upon my dad’s vinyl player, it was awesome scratching the shit out of his good records... haha!” And thus was born Rhys Riley, Mornington Peninsula local and long-time music lover of many genres. “...then I got involved with CDJs and mixers. Wow... it was endless what I could do – I feel in love straight away. Everyday I practiced,” much to the chagrin of neighbours, no doubt. But the hard work paid off - he’s been doing the rounds locally for years now, gaining enough acclaim to get slots at bars and festivals all over the world. This year he’ll be headlining Melbourne and Sydney’s biggest boat party, Fleet Beat. But what is it about the creative process that saw him drop the guitar and hit the decks? “Being a solo DJ, you have the advantage of being able to cut, change, and improvise on the fly. With a band, there are of course multiple people involved, you really need to work together to build that platform from the beginning before you even head to a studio.” His latest Mixcloud Chillout Sessions made it to #22 on their 2016 charts. “This year, people can look forward to continuous mixtapes and tracks to follow up Chillout Sessions, as well as ElectroHouse music for those big nights out on the weekends.” For bookings, email rhys. horobin@hotmail.com or contact him on social media.