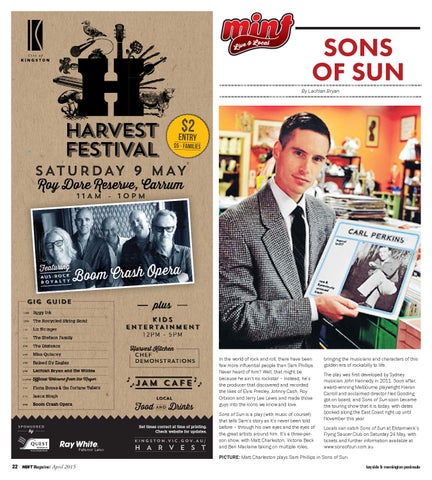 SONS OF SUN By Lachlan Bryan

In the world of rock and roll, there have been few more influential people than Sam Phillips. Never heard of him? Well, that might be because he ain’t no rockstar – instead, he’s the producer that discovered and recorded the likes of Elvis Presley, Johnny Cash, Roy Orbison and Jerry Lee Lewis and made those guys into the icons we know and love. Sons of Sun is a play (with music of course!) that tells Sam’s story as it’s never been told before – through his own eyes and the eyes of the great artists around him. It’s a three-person show, with Matt Charleston, Victoria Beck and Ben Maclaine taking on multiple roles,

bringing the musicians and characters of this golden era of rockabilly to life. The play was first developed by Sydney musician John Kennedy in 2011. Soon after, award-winning Melbourne playwright Kieran Carroll and acclaimed director Neil Gooding got on board, and Sons of Sun soon became the touring show that it is today, with dates booked along the East Coast right up until November this year. Locals can catch Sons of Sun at Elsternwick’s Flying Saucer Club on Saturday 24 May, with tickets and further information available at www.sonsofsun.com.au