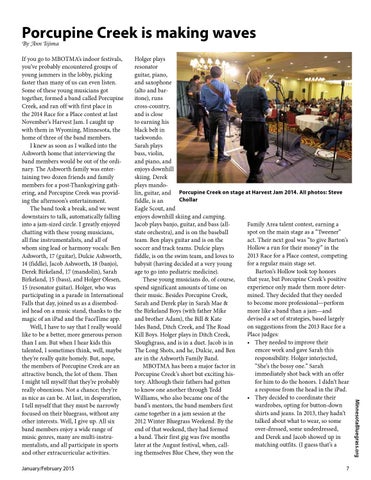 Holger plays resonator guitar, piano, and saxophone (alto and baritone), runs cross-country, and is close to earning his black belt in taekwondo. Sarah plays bass, violin, and piano, and enjoys downhill skiing. Derek plays mandolin, guitar, and Porcupine Creek on stage at Harvest Jam 2014. All photos: Steve Chollar fiddle, is an Eagle Scout, and enjoys downhill skiing and camping. Family Area talent contest, earning a Jacob plays banjo, guitar, and bass (allspot on the main stage as a “Tweener” state orchestra), and is on the baseball act. Their next goal was “to give Barton’s team. Ben plays guitar and is on the Hollow a run for their money” in the soccer and track teams. Dulcie plays 2013 Race for a Place contest, competing fiddle, is on the swim team, and loves to for a regular main stage set. babysit (having decided at a very young Barton’s Hollow took top honors age to go into pediatric medicine). that year, but Porcupine Creek’s positive These young musicians do, of course, experience only made them more deterspend significant amounts of time on mined. They decided that they needed their music. Besides Porcupine Creek, to become more professional—perform Sarah and Derek play in Sarah Mae & more like a band than a jam—and the Birkeland Boys (with father Mike devised a set of strategies, based largely and brother Adam), the Bill & Kate on suggestions from the 2013 Race for a Isles Band, Ditch Creek, and The Road Place judges: Kill Boys. Holger plays in Ditch Creek, • They needed to improve their Sloughgrass, and is in a duet. Jacob is in emcee work and gave Sarah this The Long Shots, and he, Dulcie, and Ben responsibility. Holger interjected, are in the Ashworth Family Band. “She’s the bossy one.” Sarah MBOTMA has been a major factor in immediately shot back with an offer Porcupine Creek’s short but exciting hisfor him to do the honors. I didn’t hear tory. Although their fathers had gotten a response from the head in the iPad. to know one another through Tedd • They decided to coordinate their Williams, who also became one of the wardrobes, opting for button-down band’s mentors, the band members first shirts and jeans. In 2013, they hadn’t came together in a jam session at the talked about what to wear, so some 2012 Winter Bluegrass Weekend. By the over-dressed, some underdressed, end of that weekend, they had formed and Derek and Jacob showed up in a band. Their first gig was five months matching outfits. (I guess that’s a later at the August festival, when, calling themselves Blue Chew, they won the 7

If you go to MBOTMA’s indoor festivals, you’ve probably encountered groups of young jammers in the lobby, picking faster than many of us can even listen. Some of these young musicians got together, formed a band called Porcupine Creek, and ran off with first place in the 2014 Race for a Place contest at last November’s Harvest Jam. I caught up with them in Wyoming, Minnesota, the home of three of the band members. I knew as soon as I walked into the Ashworth home that interviewing the band members would be out of the ordinary. The Ashworth family was entertaining two dozen friends and family members for a post-Thanksgiving gathering, and Porcupine Creek was providing the afternoon’s entertainment. The band took a break, and we went downstairs to talk, automatically falling into a jam-sized circle. I greatly enjoyed chatting with these young musicians, all fine instrumentalists, and all of whom sing lead or harmony vocals: Ben Ashworth, 17 (guitar), Dulcie Ashworth, 14 (fiddle), Jacob Ashworth, 18 (banjo), Derek Birkeland, 17 (mandolin), Sarah Birkeland, 15 (bass), and Holger Olesen, 15 (resonator guitar). Holger, who was participating in a parade in International Falls that day, joined us as a disembodied head on a music stand, thanks to the magic of an iPad and the FaceTime app. Well, I have to say that I really would like to be a better, more generous person than I am. But when I hear kids this talented, I sometimes think, well, maybe they’re really quite homely. But, nope, the members of Porcupine Creek are an attractive bunch, the lot of them. Then I might tell myself that they’re probably really obnoxious. Not a chance; they’re as nice as can be. At last, in desperation, I tell myself that they must be narrowly focused on their bluegrass, without any other interests. Well, I give up. All six band members enjoy a wide range of music genres, many are multi-instrumentalists, and all participate in sports and other extracurricular activities.