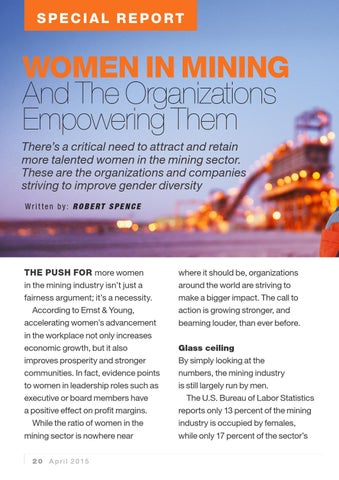 WOMEN IN MINING And The Organizations Empowering Them There’s a critical need to attract and retain more talented women in the mining sector. These are the organizations and companies striving to improve gender diversity Writ ten by: ROBE RT SPE N C E

THE PUSH FOR more women in the mining industry isn’t just a fairness argument; it’s a necessity. According to Ernst &amp; Young, accelerating women’s advancement in the workplace not only increases economic growth, but it also improves prosperity and stronger communities. In fact, evidence points to women in leadership roles such as executive or board members have a positive effect on profit margins. While the ratio of women in the mining sector is nowhere near 20 April 2015

where it should be, organizations around the world are striving to make a bigger impact. The call to action is growing stronger, and beaming louder, than ever before. Glass ceiling By simply looking at the numbers, the mining industry is still largely run by men. The U.S. Bureau of Labor Statistics reports only 13 percent of the mining industry is occupied by females, while only 17 percent of the sector’s 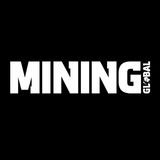