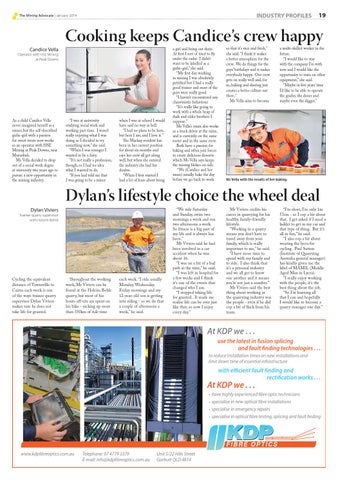 As a child Candice Vella never imagined herself as a miner, but the self-described girlie-girl with a passion for sweet treats now works as an operator with HSE Mining at Peak Downs, near Moranbah. Ms Vella decided to drop out of a social work degree at university two years ago to pursue a new opportunity in the mining industry.

“I was at university studying social work and working part time. I wasn’t really enjoying what I was doing so I decided to try something new,” she said. “When I was younger I wanted to be a fairy. “It’s not really a profession, though, so I had no idea what I wanted to do. “If you had told me that I was going to be a miner

when I was at school I would have said no way in hell. “I had no plans to be here, but here I am, and I love it.” The Mackay resident has been in her current position for about six months and says her crew all get along well, but when she entered the industry she had her doubts. “When I first started I had a lot of fears about being

a girl and being out there. At first I sort of tried to fly under the radar. I didn’t want to be labelled as a girlie-girl,” she said. “My first day working in mining I was absolutely petrified but I had a really good trainer and most of the guys were really good. “I haven’t encountered any chauvinistic behaviour. “It’s really like going to work with a whole heap of dads and older brothers I suppose.” Ms Vella’s mum also works as a truck driver at the mine, and is currently on the same roster and in the same crew. Both have a passion for baking and often join forces to create delicious desserts which Ms Vella says keeps the mining blokes on side. “We (Candice and her mum) usually bake the day before we go back to work

so that it’s nice and fresh,” she said. “I think it makes a better atmosphere for the crew. We do things for the guys’ birthdays and it makes everybody happy. Our crew gets on really well and, for us, baking and sharing just creates a better culture out there.” Ms Vella aims to become

a multi-skilled worker in the future. “I would like to stay with the company I’m with now and I would like the opportunity to train on other equipment,” she said. “Maybe in five years’ time I’d like to be able to operate the grader, the dozer and maybe even the digger.”

Ms Vella with the results of her baking.

Cycling the equivalent distance of Townsville to Cairns each week is one of the ways trainee quarry supervisor Dylan Viviers makes sure he does not take life for granted.

Throughout the working week, Mr Viviers can be found at the Holcim Bohle quarry, but most of his hours off-site are spent on his bike - racking up more than 350km of ride time

each week. “I ride usually Monday, Wednesday, Friday mornings and my 12-year-old son is getting into riding - so we do that a couple of afternoons a week,” he said.

“We ride Saturday and Sunday, swim two mornings a week and run two afternoons a week. So fitness is a big part of my life and it always has been.” Mr Viviers said he had been involved in a car accident when he was about 16. “I was on a bit of a bad path at the time,” he said. “I was left in hospital for a few weeks and I think it’s one of the events that changed who I am. “I stopped taking life for granted. It made me realise life can be over just like that, so now I enjoy every day.”

Mr Viviers credits his career in quarrying for his healthy, family-friendly lifestyle. “Working in a quarry means you don’t have to travel away from your family, which is really important to me,” he said. “I have more time to spend with my family and to ride. I also think that it’s a personal industry and we all get to know one another and it means you’re not just a number.” Mr Viviers said the best thing about working in the quarrying industry was the people - even if he did cop a bit of flack from his team.

“I’m short, I’m only 1m 53cm - so I cop a bit about that. I get asked if I need a ladder to get in my car and that type of thing. But it’s all in fun,” he said. “I also cop a bit about wearing the lycra for cycling. Paul Sutton (Institute of Quarrying Australia general manager) has kindly given me the label of MAMIL (Middle Aged Man in Lycra). “I really enjoy working with the people, it’s the best thing about the job. “So I’m learning all that I can and hopefully I would like to become a quarry manager one day.”

At KDP we . . . use the latest in fusion splicing and fault finding technologies . . . to reduce installation times on new installations and limit down time of essential infrastructure