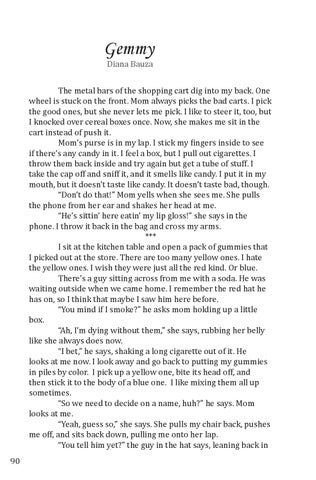 The metal bars of the shopping cart dig into my back. One wheel is stuck on the front. Mom always picks the bad carts. I pick the good ones, but she never lets me pick. I like to steer it, too, but I knocked over cereal boxes once. Now, she makes me sit in the cart instead of push it. Mom’s purse is in my lap. I stick my fingers inside to see if there’s any candy in it. I feel a box, but I pull out cigarettes. I throw them back inside and try again but get a tube of stuff. I take the cap off and sniff it, and it smells like candy. I put it in my mouth, but it doesn’t taste like candy. It doesn’t taste bad, though. “Don’t do that!” Mom yells when she sees me. She pulls the phone from her ear and shakes her head at me. “He’s sittin’ here eatin’ my lip gloss!” she says in the phone. I throw it back in the bag and cross my arms. *** I sit at the kitchen table and open a pack of gummies that I picked out at the store. There are too many yellow ones. I hate the yellow ones. I wish they were just all the red kind. Or blue. There’s a guy sitting across from me with a soda. He was waiting outside when we came home. I remember the red hat he has on, so I think that maybe I saw him here before. “You mind if I smoke?” he asks mom holding up a little box. “Ah, I’m dying without them,” she says, rubbing her belly like she always does now. “I bet,” he says, shaking a long cigarette out of it. He looks at me now. I look away and go back to putting my gummies in piles by color. I pick up a yellow one, bite its head off, and then stick it to the body of a blue one. I like mixing them all up sometimes. “So we need to decide on a name, huh?” he says. Mom looks at me. “Yeah, guess so,” she says. She pulls my chair back, pushes me off, and sits back down, pulling me onto her lap. “You tell him yet?” the guy in the hat says, leaning back in 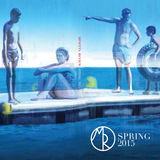