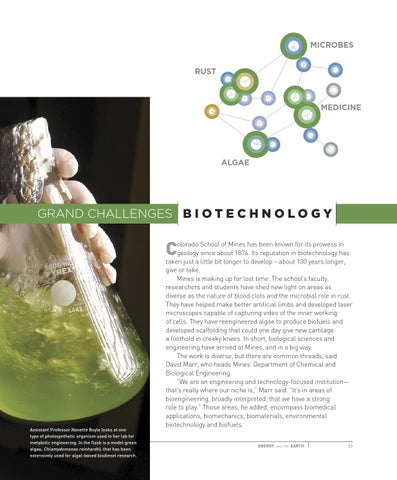 Assistant Professor Nanette Boyle looks at one type of photosynthetic organism used in her lab for metabolic engineering. In the flask is a model green algae, Chlamydomonas reinhardtii, that has been extensively used for algal-based biodiesel research.

olorado School of Mines has been known for its prowess in geology since about 1874. Its reputation in biotechnology has taken just a little bit longer to develop – about 130 years longer, give or take. Mines is making up for lost time. The school’s faculty, researchers and students have shed new light on areas as diverse as the nature of blood clots and the microbial role in rust. They have helped make better artificial limbs and developed laser microscopes capable of capturing video of the inner working of cells. They have reengineered algae to produce biofuels and developed scaffolding that could one day give new cartilage a foothold in creaky knees. In short, biological sciences and engineering have arrived at Mines, and in a big way. The work is diverse, but there are common threads, said David Marr, who heads Mines’ Department of Chemical and Biological Engineering. “We are an engineering and technology-focused institution— that’s really where our niche is,” Marr said. “It’s in areas of bioengineering, broadly interpreted, that we have a strong role to play.” Those areas, he added, encompass biomedical applications, biomechanics, biomaterials, environmental biotechnology and biofuels. ENERGY 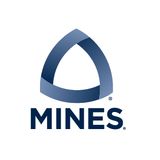