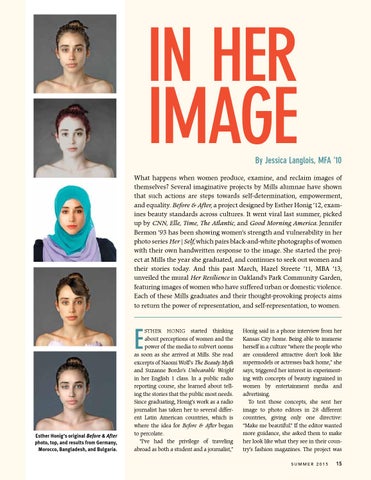 What happens when women produce, examine, and reclaim images of themselves? Several imaginative projects by Mills alumnae have shown that such actions are steps towards self-determination, empowerment, and equality. Before &amp; After, a project designed by Esther Honig ’12, examines beauty standards across cultures. It went viral last summer, picked up by CNN, Elle, Time, The Atlantic, and Good Morning America. Jennifer Bermon ’93 has been showing women’s strength and vulnerability in her photo series Her | Self, which pairs black-and-white photographs of women with their own handwritten response to the image. She started the project at Mills the year she graduated, and continues to seek out women and their stories today. And this past March, Hazel Streete ’11, MBA ’13, unveiled the mural Her Resilience in Oakland’s Park Community Garden, featuring images of women who have suffered urban or domestic violence. Each of these Mills graduates and their thought-provoking projects aims to return the power of representation, and self-representation, to women.

Esther Honig’s original Before &amp; After photo, top, and results from Germany, Morocco, Bangladesh, and Bulgaria.

Honig said in a phone interview from her

about perceptions of women and the

power of the media to subvert norms

herself in a culture “where the people who

as soon as she arrived at Mills. She read

supermodels or actresses back home,” she

says, triggered her interest in experiment-

in her English 1 class. In a public radio

ing with concepts of beauty ingrained in

reporting course, she learned about tell-

women by entertainment media and

ing the stories that the public most needs.

Since graduating, Honig’s work as a radio

To test those concepts, she sent her

journalist has taken her to several differ-

image to photo editors in 28 different

ent Latin American countries, which is

countries, giving only one directive:

where the idea for Before &amp; After began

“Make me beautiful.” If the editor wanted

more guidance, she asked them to make

“I’ve had the privilege of traveling

her look like what they see in their coun-

abroad as both a student and a journalist,”