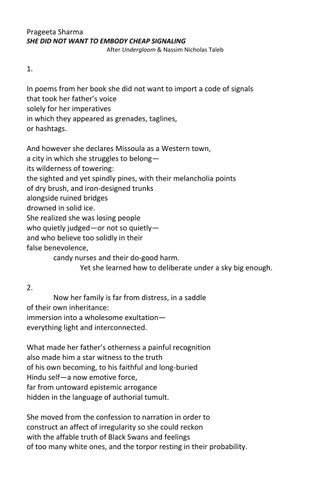 Prageeta Sharma SHE DID NOT WANT TO EMBODY CHEAP SIGNALING After Undergloom &amp; Nassim Nicholas Taleb

1. In poems from her book she did not want to import a code of signals that took her father’s voice solely for her imperatives in which they appeared as grenades, taglines, or hashtags. And however she declares Missoula as a Western town, a city in which she struggles to belong— its wilderness of towering: the sighted and yet spindly pines, with their melancholia points of dry brush, and iron-designed trunks alongside ruined bridges drowned in solid ice. She realized she was losing people who quietly judged—or not so quietly— and who believe too solidly in their false benevolence, candy nurses and their do-good harm. Yet she learned how to deliberate under a sky big enough. 2. Now her family is far from distress, in a saddle of their own inheritance: immersion into a wholesome exultation— everything light and interconnected. What made her father’s otherness a painful recognition also made him a star witness to the truth of his own becoming, to his faithful and long-buried Hindu self—a now emotive force, far from untoward epistemic arrogance hidden in the language of authorial tumult. She moved from the confession to narration in order to construct an affect of irregularity so she could reckon with the affable truth of Black Swans and feelings of too many white ones, and the torpor resting in their probability.

Highlights of work made by a selection of artists in residence at the Millay Colony for the Arts in 2011-2013. 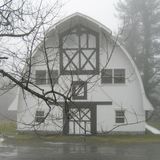 The Millay Colony for the Arts