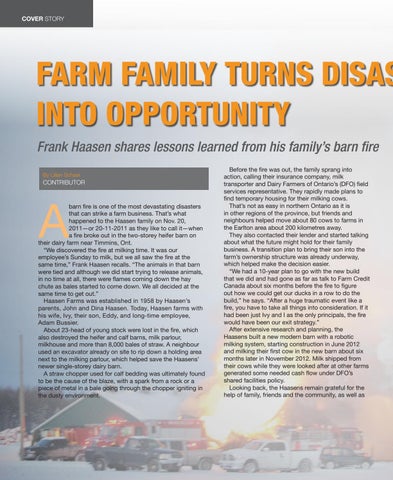 barn fire is one of the most devastating disasters that can strike a farm business. That’s what happened to the Haasen family on Nov. 20, 2011—or 20-11-2011 as they like to call it—when a fire broke out in the two-storey heifer barn on their dairy farm near Timmins, Ont. “We discovered the fire at milking time. It was our employee’s Sunday to milk, but we all saw the fire at the same time,” Frank Haasen recalls. “The animals in that barn were tied and although we did start trying to release animals, in no time at all, there were flames coming down the hay chute as bales started to come down. We all decided at the same time to get out.” Haasen Farms was established in 1958 by Haasen’s parents, John and Dina Haasen. Today, Haasen farms with his wife, Ivy, their son, Eddy, and long-time employee, Adam Bussier. About 23-head of young stock were lost in the fire, which also destroyed the heifer and calf barns, milk parlour, milkhouse and more than 8,000 bales of straw. A neighbour used an excavator already on site to rip down a holding area next to the milking parlour, which helped save the Haasens’ newer single-storey dairy barn. A straw chopper used for calf bedding was ultimately found to be the cause of the blaze, with a spark from a rock or a piece of metal in a bale going through the chopper igniting in the dusty environment.

Before the fire was out, the family sprang into action, calling their insurance company, milk transporter and Dairy Farmers of Ontario’s (DFO) field services representative. They rapidly made plans to find temporary housing for their milking cows. That’s not as easy in northern Ontario as it is in other regions of the province, but friends and neighbours helped move about 80 cows to farms in the Earlton area about 200 kilometres away. They also contacted their lender and started talking about what the future might hold for their family business. A transition plan to bring their son into the farm’s ownership structure was already underway, which helped make the decision easier. “We had a 10-year plan to go with the new build that we did and had gone as far as talk to Farm Credit Canada about six months before the fire to figure out how we could get our ducks in a row to do the build,” he says. “After a huge traumatic event like a fire, you have to take all things into consideration. If it had been just Ivy and I as the only principals, the fire would have been our exit strategy.” After extensive research and planning, the Haasens built a new modern barn with a robotic milking system, starting construction in June 2012 and milking their first cow in the new barn about six months later in November 2012. Milk shipped from their cows while they were looked after at other farms generated some needed cash flow under DFO’s shared facilities policy. Looking back, the Haasens remain grateful for the help of family, friends and the community, as well as