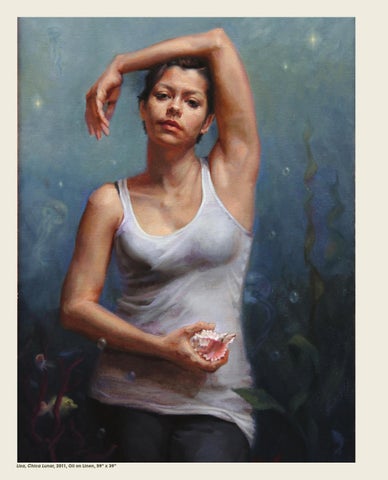 or centuries, portraiture subjects sat, backs ramrod straight, in a breezy studio as the artist enjoyed a rare moment of intimacy with the elite personages. Working in this close situation, these

painters depicted the ruff around a duke’s neck, the mysterious gaze of a queen, or the coy smile of an heiress. Milixa Morón, a Venezuelan realist painter, renders her subjects in oil with techniques derived from such portraiture artists. These date back to the painters of the nineteenth century and then go even further back, all the way to the Renaissance masters. “I try to use the best of every period,” Morón says. Her glazing technique is taken from that used during the Renaissance; she also prepares her canvases as did artists of that period. From the Baroque period, Morón took the style of using intense light and deep shadows.

The skin of each subject possesses an exceptional luminescence, which helps when one is portraying goddesses, as Morón often does. She attributes this to her use of white lead paint, the principal white that has long been used in NashvilleArts.com

classical European oil painting. “It is perfect to prepare flesh colors, as it is warmer and more transparent than other whites and gives the flesh a better look, more real,” Morón says. As for the nineteenth century, Morón eschews the graceful formality of portrait painters such as John Singer Sargent or Jean-Auguste-Dominique Ingres. While her work is definitely improved by that period’s realism, she “leave[s] aside the idealism,” she explains.

It is no wonder that Morón has amassed this nuanced philosophy of art. She has studied internationally at the Design Institute of Valencia, Venezuela; at Camberwell College of Arts in London; at La Academia de Arte Giovanni Battista Scalabrini of Valencia, Venezuela; and the Angel Academy of Art, Florence. She has also completed workshops at the Academy of Realist Art in Toronto. Morón currently lives and works in Florence, Italy, that city that has

nourished many a legendary painter. She is represented in Nashville by Haynes Galleries. Her favorite painters come from the nineteenth century and earlier, including Sandro Botticelli, Rembrandt van Rijn, Peter Paul Rubens, John William Waterhouse, Ilya Repin, Gustav Klimt, and Giovanni Segantini. Yet Morón, who was born in 1977, falls into the twenty-first-century generation of figure painters that includes Lucian Freud, Elizabeth Peyton, Mathew

Morón says. “The way they depicted each story was beautiful.” And as a painter in the current era, Morón depicts her stories in a way that is also beautiful, a luminous marriage of the past and the present. Milixa Morón is represented by Haynes Galleries. For more information about the artist please visit www.haynesgalleries.com and www.milixamoron.com.

Carletty, John Currin, Chuck Close, and Alex Katz. For her part, Morón paints both the ordinary and the iconic, with an emphasis on the latter. Mythology plays its part, as do allegory and symbolism. Goddesses are a key inspiration, and Morón enjoys representing the deities of her South American culture. “One of my favorites is Gaea, the creator of everything, the first goddess,” she says. “I believe in the divine feminine, as it creates life.” One of many paintings that fall into this realm is Yara, Morón’s depiction of a Venezuelan goddess. The background is a jungle by way of Madonna of the Rocks, yet the goddess is made contemporary due to her pixie haircut. As with all of Morón’s subjects, Yara possesses a sense of heightened drama, despite her elegant pose. As a painter of portraits, Morón benefits from the ease of contemporary figure painting and its robust vein of realism. One sees this with the painting Divina Pastora, in which the swaddled babe in the sitter’s lap and a gentle lamb at her knee are pure Renaissance. But her sideways glance, along with her thoroughly modern hairstyle, could be that of a woman waiting for a subway to arrive. That is just one facet of Morón’s work that makes it so refreshing. “What helps a lot today is the freedom of expression, so you can paint anything,” Morón says. Beyond technique, what Morón has learned from the great painters of history is the subtlety of using allegory to communicate to the viewer. “The masters have taught me everything about allegories,” 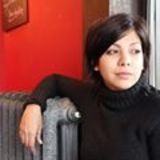