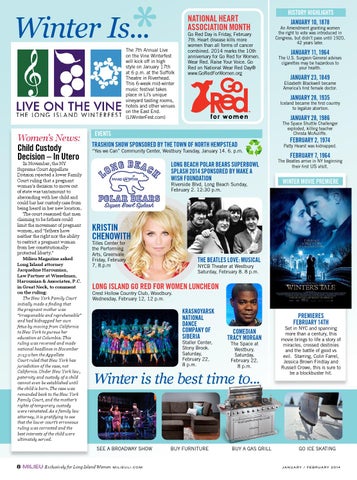 The 7th Annual Live on the Vine Winterfest will kick off in high style on January 17th at 6 p.m. at the Suffolk Theatre in Riverhead. This 6-week mid-winter music festival takes place in LI’s unique vineyard tasting rooms, hotels and other venues on the East End. (LIWinterFest.com)

In November, the NY Supreme Court Appellate Division rejected a lower Family Court ruling that a pregnant woman’s decision to move out of state was tantamount to absconding with her child and could bar her custody case from being heard in her new location. The court reasoned that men claiming to be fathers could limit the movement of pregnant women, and “fathers have neither the right nor the ability to restrict a pregnant woman from her constitutionallyprotected liberty.” Milieu Magazine asked Long Island attorney Jacqueline Harounian, Law Partner at Wisselman, Harounian & Associates, P.C. in Great Neck, to comment on the ruling: The New York Family Court initially made a finding that the pregnant mother was “irresponsible and reprehensible” and had kidnapped her own fetus by moving from California to New York to pursue her education at Columbia. This ruling was reversed and made national headlines in November 2013 when the Appellate Court ruled that New York has jurisdiction of the case, not California. Under New York law, paternity and custody of a child cannot even be established until the child is born. The case was remanded back to the New York Family Court, and the mother’s rights of temporary custody were reinstated. As a family law attorney, it is gratifying to see that the lower court’s erroneous ruling was corrected and the best interests of the child were ultimately served.

An Amendment granting women the right to vote was introduced in Congress, but didn’t pass until 1920, 42 years later.

The U.S. Surgeon General advises cigarettes may be hazardous to your health.

Events Trashion Show Sponsored By The Town of North Hempstead

The Beatles arrive in NY beginning their first US visit.

Winter is the best time to...

Set in NYC and spanning more than a century, this movie brings to life a story of miracles, crossed destinies and the battle of good vs evil. Starring, Colin Farrel, Jessica Brown Findlay and Russell Crowe, this is sure to be a blockbuster hit. 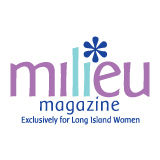