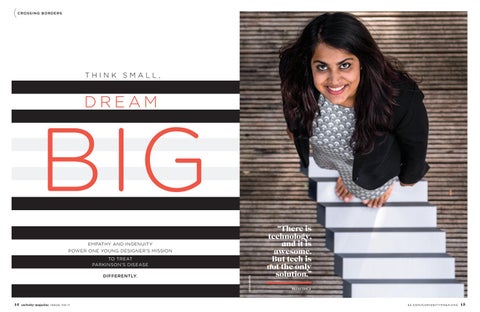 “There is technology, and it is awesome. But tech is not the only solution.” MILEHA SONEJI

“Mileha was a wonderful child and I knew she had great potential,” says Narayanan, of his niece’s creative talents. “But of course I was surprised when she came to me and said that she is doing a project which will make my life better. I thought it would be some miniature form of help.” But Soneji had much loftier aspirations. She used the basic tools she’d learned through her studies, beginning with what her industry calls the fuzzy front-end of innovation. In this stage of development, designers define the problem they want to solve and consider the product’s eventual users. That meant that Soneji needed to understand more about Parkinson’s disease in general and patients’ lives in particular. She learned that Parkinson’s, a degenerative disease of the brain, also fundamentally changes the way our brains work. Common symptoms, such as tremors, slowed movement, and impairment of the autonomic nervous system, are caused by the progressive decline of dopamine production in the basal ganglia. This particular part of the brain controls specific motor skills, such as balancing, walking, speaking, writing, fastening buttons, and driving. When enough of the dopamine supply has been lost, the switch that acts as a “start signal” for motor skills needed for many routine daily tasks is basically turned off. Once she had a clear grasp of how Parkinson’s worked, Soneji arranged for her uncle to introduce her to others who were in varying stages of the

MILEHA SONEJI’S UNCLE RAMESH NARAYANAN, WHO HAD GIVEN UP DRINKING TEA WITH HIS FAMILY BECAUSE OF TREMORS TRIGGERED BY PARKINSON’S, CAN ENJOY IT ONCE MORE THANKS TO SONEJI’S NO-SPILL CUP DESIGN.

During Ganesh Chaturthi, a Hindu festival honoring the elephant-headed god of wisdom and learning, she spent countless hours in her uncle Ramesh Narayanan’s home playing table tennis and practicing dance routines with his daughter. She particularly looked forward to the times her uncle, ever the life of the party, joined in the fun alongside the children. But by the time Soneji started studying for a degree in product design, she noticed a disturbing change. Her uncle, who’d been diagnosed with Parkinson’s disease, had begun retreating into the shadows during festive family gatherings. Embarrassed by his new physical limitations, he tried hiding his trembling hands and difficulty walking from those he loved. In short, Narayanan’s confidence and self-esteem had disappeared. As Soneji worried over her uncle’s health, one of her professors challenged her class with an intriguing assignment — create a product for users with special needs. Soneji immediately thought of her uncle’s newfound challenges and wondered how she might put her design skills to use to empower him to lead a life closer to the one he once enjoyed. She believed in the power of thoughtful, intentional design to improve lives. But could she really design a solution to help restore her uncle’s dignity and confidence along with his previous zest for living?

ileha Soneji always loved singing, dancing, and playing games with her extended family during festivals in her hometown of Pune, India.

disease and then interviewed them to learn more about its impact on their lives. Soneji’s uncle along with two others in the group said they’d stopped drinking tea — a powerful part of socializing in India and other countries — in public because their hand tremors caused them to spill it. To compensate, they could have poured tiny amounts of liquid into oversized mugs — or sipped from sipper cups made specifically for babies. “People with Parkinson’s already stand out in public because of their disease,” Soneji says. “They don’t want to be embarrassed by something like a sippy cup.” “I stuck out like a sore thumb in public because of the tremors,” confirms Narayanan. “Not drinking tea in public was an easier solution than having tea in front of others and being a spectacle.” Soneji determined to focus her design efforts on two areas where Parkinson’s often strikes hardest: tremors and difficulty walking.

It’s common for designers to focus on high-tech solutions, Soneji explains. Too often, she adds, people think all they need is a new app to solve an old problem. “Yes, there is technology, and it’s awesome,” she says, “but tech is not the only solution.” Soneji flung herself into her users’ world. Watching and listening, she learned about their lives, their sense of loss, their frustration, and their fear. In other words, Soneji practiced empathy, a tool she now considers an essential part of the design process. Then one day, as Soneji absentmindedly swished water around in a water bottle, she had a breakthrough. She realized that the wide-mouthed cup which curved inward at the top deflected the swirling water back inside it without spilling. It was the a-ha moment that shaped her “Parkinson’s cup” design. Soneji headed to her school’s lab, where she heated plastic and vacuum formed it into molds to test various shapes. Eventually, she settled on a simple, curved-lip cup with a handle wide and large enough to allow a patient’s entire palm to fit through it. As a finishing

“People with Parkinson’s already stand out in public because of their disease. They don’t want to be embarrassed by something like a sippy cup.”

Cues allow patients to use other areas of the brain that are not affected by Parkinson’s disease to execute motor skills, making movement faster and easier for short periods of time. Bloem knew that auditory cues, like taking a step to each rhythmic beat of a metronome, can help regulate a person’s steps and prevent them from shuffling or freezing on the spot. Visual cues, such as strips of tape that a person consciously steps over, can also be helpful in spots where someone has difficulty with freezing, such as in a doorway at home. But every treatment doesn’t work for every patient. For example, a two-dimensional visual cue — tape on the floor — did not improve walking in one of Bloem’s patients. However, if you placed bars on the floor that the patient had to consciously step over, then he could walk. “The case was really fascinating. It showed that some people need a three-dimensional visual cue like bars on the floor, and lo and behold, along comes Mileha with her painted staircase,” says Bloem. “What’s cool about the Staircase Illusion? It’s flat as a pancake, but it creates this three-dimensional illusion of a height. But apparently that’s enough to fool the brain and make a man walk.”

THE INVERTED PEAR SHAPE OF THE CUP FORCES WATER DOWN BEFORE IT CAN SPILL FROM THE TOP.

EVEN IF THE USER HAS AGGRESSIVE HAND TREMORS, LIQUID WILL FLOW SIDE-TO-SIDE, BUT STAY INSIDE THE CUP.

Emboldened by the effectiveness of her no-spill cup, Soneji turned her attention to the walking difficulties her uncle faced. She began her empathy-powered design process by observing him at home in his daily life. At the beginning, Soneji could not imagine how he managed to climb the stairs. “It’s no problem,” Narayanan told her. “I’ll show you.” Sure enough, he did just that. She watched him struggle to get to the staircase, set aside his walker, then smoothly walk upstairs and downstairs. There was no hint of a disability in his gait. Soneji couldn’t believe her eyes. How could this disease of the brain impact walking on a flat surface and yet have no effect on a much more complex task like navigating stairs? As she puzzled over this new piece of the Parkinson’s puzzle, she had an epiphany. Soneji hypothesized that her uncle could climb the stairs because it was a continuous motion. “What if,” she wondered, “we try an illusion of a staircase on flat surfaces?” She used graphic design software to draw blocks that, when placed on a flat surface, created the illusion of a staircase. She printed them out on 11-by-17-inch paper sheets, and pieced them together. That same

A PATH FORWARD Soneji had accomplished her mission of designing a product — actually two — for Parkinson’s patients that could improve their lives, but a project that started as a class assignment was far from over. In 2013, after graduating and working as a product designer for two years, Soneji left India for the Netherlands to pursue a master’s degree in product design. Now more certain than ever that empathetic design was the key to great design, she looked for platforms to share what she’d learned with a broader audience. In 2015, she won a student competition that allowed her to present “Simple hacks for life with Parkinson’s” at a nearby TEDx event. Her presentation prompted calls and emails from Parkinson’s patients’ families, printing companies, nursing homes, and therapists. It also caught the eye of Professor Bastiaan Bloem, a neurologist in the Netherlands who runs a Parkinson’s clinic at the Radboud University Medical Center. While Soneji did not know it at the time, Bloem recognized that her staircase design had the potential to improve a treatment strategy known as “cueing.”

evening, she took her crude creation to her uncle’s house, where he was more than ready to test out the flat patterns. With the same dexterity with which he climbed the stairs, Narayanan walked swiftly across the design, even lifting his walker at times. For a few minutes, he says, he had a sense of déjà vu, walking as he used to walk before Parkinson’s affected him. “It was a moment of a lifetime — and even more so because Mileha had done it for me,” Narayanan remembers.

touch, she indented deep, grooved sides that would help fingers grip easily. When she presented the sleek, modern-looking cup to her test group, it worked beautifully, especially for one man who suffered from heavy tremors. Today, Soneji is figuring out how best and where to manufacture the cups that could help return Parkinson’s patients back into their families’ lives to share tea with their family, friends, and neighbors.

Bloem wrote to Soneji. They later met at a conference where they agreed to write a scientific paper together to share Soneji’s findings. Today, Soneji’s discovery is making an impact in both the low- and high-tech worlds. Bloem is collaborating with a team led by Richard van Wezel, Ph.D. at the University of Twente to project staircases into Parkinson’s patients’ visual fields through “smart” glasses, which would enable patients to have their staircases with them wherever they go. Meanwhile, Soneji is testing the Staircase Illusion in nursing homes. The product has evolved from paper to thin, plastic sheets that can be stuck to the floor. She gets four to five requests for it each week from people who see it online. She emails each a digital copy with instructions on how to print it. Donations are optional, but Soneji really wants users to send her a video to show how the stairs are working, which enables her to make further tweaks. In the future, she would like to see the staircase solution customized for each patient. And a carpet manufacturer has shown interest in printing the designs on rugs. Narayanan believes his niece’s venture into designing products for the benefit of Parkinson’s patients exemplifies Mahatma Gandhi’s example of “simple living and high thinking,” even at her young age. “In the process she has touched on my life like an angel,” he says.

SONEJI’S STAIRCASE ILLUSION, WHICH SITS ON FLAT SURFACES, EFFECTIVELY “TRICKS” HER UNCLE’S BRAIN AND ALLOWS HIM TO WALK SMOOTHLY AND WITHOUT ASSISTANCE.

“It was a moment of a lifetime — and even more so because Mileha had done it for me.” RAMESH NARAYANAN

Publised in the Wall Street Journal