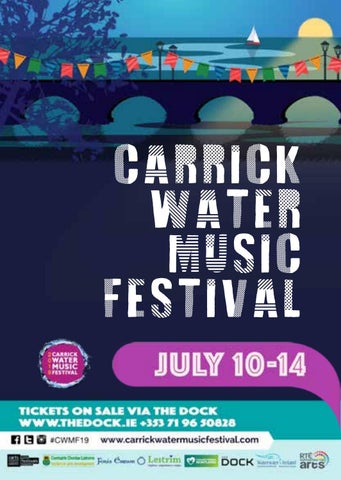 Lyrical cellos, mellow tonic choirs, giant gramophones and BBC Proms performers...where else could it be but Carrick Water Music Festival!! It’s a decade and half on, its midsummer, the sun shines and there is no better place to be than in Carrick-on-Shannon for our 15th Festival which showcases our unique and wonderful town where the livin’ is... From Uruguay meets O’Carolan country fusing the exceptional talents of Jessie De Bellis &amp; Fiachra Guihen, to exquisite performances in St.George’s Church from artists such as the inimitable Brian Kennedy. To High energy trad influenced by House, Jazz &amp; Rock from Moxie in The Dock with a late night DJ set to boot!

Don’t miss Stockton’s Wing at The Landmark Hotel and Vladimir &amp; Anton Jablokov with friends in probably Ireland’s oldest hostelry The Bush Hotel..need we say more? Experience Art, Street Entertainment and Free Music Trails throughout the town, soak up the atmosphere and feed the senses in our many great cafes, restaurants and pubs. The warmest of welcomes to all our loyal patrons and especially to those new! To our generous funders, sponsors and partners a big thank you..we couldn’t do it without you.

PS: With great interest in this year’s Festival, be sure to pre-book tickets with our Festival Box Office Partner The Dock. Tickets can be booked in person, by phoning +353 71 96 50828 or online at www.thedock.ie make sure to ask about the loyalty ticket discount! 03

VARIOUS LOCATIONS AROUND THE TOWN FREE

Follow its journey around the town using the hashtag #cwmf19 to join in on its adventures and catch a tune or two! Donnacha Cahill is an acclaimed professional artist from Galway who works mainly in steel. His art practice revolves around observations and his pieces aim to spark the imagination and create conversation. He has been commissioned to make large works and installations for The Department of Education, Trinity College Dublin, RTÉ and Electric Picnic. 7

From Uruguay to O’Carolan country! Back by popular demand we are pleased to again present internationally renowned classical pianist Jessie de Bellis and one of Ireland’s finest harpists Fiachra Guihen with an exciting new medley of Turlough O’Carolan’s popular music and other classics. Fiachra is a 22 year old musician from Keadue, Co. Roscommon. He plays mainly traditional music with ensembles including the National Folk Orchestra of Ireland. Awarded numerous allIreland medals for harp, he has performed in venues including Dublin’s National Concert Hall and London’s Barbican Theatre. Jessie is a winner of the prestigious Brazil International Piano Competition, originally from Uruguay but now living in Ireland. She studied in Holland under Ronald Brautigham and CWMF 2017

has performed in concert halls around the world including Concertgebouw, Amsterdam and Carnegie Hall, New York.

............................................. Enjoy an evening of classical music as St. George’s Church is brought to life by cellist Miriam Roycroft and pianist Lance Coburn presenting their ‘Lyrical Cello’ programme. Sit back and relax as music by Martinu, Beethoven, Chopin and others will be beautifully performed on the cello and piano. Highlights include featuring Falla’s ‘Suite Popular Española’, an arrangement of six of the

‘Seven Popular Spanish Songs’ about all the different aspects of love arranged for cello and piano, a cello sonata by Chopin, ‘Bei Männern’ Variations from Mozart’s masterful ‘Magic Flute’ Opera and a rarely-heard sonata by Dutch composer, Henriëtte Bosmans. Miriam and Lance are both professors of their instruments at the Royal Irish Academy of Music in Dublin and have performed around the world, regularly giving masterclasses in the USA, China, Poland and Finland. 9

Spend the day soaking up the Festival atmosphere in wonderful town cafes, venues and shops listening to tunes of all genres by our very talented local musicians. Performers include: The Cat’s Meow l Carrick Trad Group l Ava Brogan l Alla Crosbie l Carole Coleman, Edel Rowley &amp; Rhona Trench l Áirc Damhsa Dance Club &amp; lots more! Check out the Festival Facebook page &amp; the poster at the Town Clock for information on which performer is at each venue and follow the trail around town using the hashtag #cwmf19!

The Kobe Trio with Special Guest

Phronesis and Thelonious Monk. With Mark Murphy on piano, Jamie Carswell on bass and Con Schmaucks on drums this trio have played in some of the best jazz venues and festivals in the region. The trio will be joined by Ciaran Wilde on saxophone. Ciaran started playing professionally at 16 and has led the Dublin City Jazz Orchestra. His has performed on various Irish movie soundtracks as well as played with various artists such as Van Morrison, The Pogues and Sharon Shannon to name a few. 11

Get ready to SING watching this animated musical-themed feel good film suitable for all the family!

Fully seated event, first come, first served. ............................................. Performing as part of their very special ‘Retrospective’ tour, showcasing their vast music catalogue spanning 4 decades from the early recordings of ‘Take a Chance’ to the innovative and critically acclaimed ‘Light in the Western Sky’. During their career they recorded and performed with Ronnie Drew, The Dubliners, Sammy Davis Junior, Sharon

Shannon and The Clancy Brothers and appeared in Oscar nominated movie ‘The Field’. Retrospective tells their unique story through music songs and stories. An engaging and insightful night of entertainment bringing you into the heart of the wing! With special guests and regulars Tara Breen, Karol Lynch, Tommy Hayes, Paul Roche, Mike Hanrahan and Paul McSherry a very special night is of Wing music is guaranteed.

............................................. Vladimir &amp; Anton THE VIOLINISTS, accompanied by piano and double bass are back by popular demand to play their classical virtuosic compositions based on popular themes from past and present including ‘Tarantella Napoletana’, ‘Que Sera Sera’, Coldplay’s ‘Viva La Vida’ and Queen’s ‘Bohemian Rhapsody’. Brothers by birth and joined together by a passion for music, the boys were born CWMF 2017

to follow in their ancestors’ footsteps. They are the 4th generation of musical maestros, touring Europe from an early age with the family ensemble. Their style combines classical music with the playfulness of traditional folk. The merging of different genres gives The Violinists an intense and unique performance edge. The Violinists performances include Dublin’s National Concert Hall, London’s Palladium, BBC Proms &amp; Concert Orchestra and numerous collaborations with Katherine Jenkins.

Member of ‘Café Orchestra’ and is currently in the final stages of a PhD in Guitar Improvisation at The Conservatory of Music. Oleg Ponomarev has lived in Ireland for over 20 years. After making a name for himself with Russian Gypsy Band Lokyo, he has played internationally with artists including Ravi Shankar and Ronnie Wood from the Rolling Stones. He is a master of Gypsy Swing, the jazz style made famous by Django Reinhardt. Also in this fine trio is another member of NoCrows, double bassist Eddie Lee, a regular on the Moon River Water Music sessions. 17

Freemasons Hall, The French Embassy and Trinity College Dublin, The Mellow Tonics will perform an afternoon concert in the intimate surroundings of St. George’s Church. Their wonderfully varied programme ranges from works by contemporary Irish composer Ian Wilson and rock band The Stunning, to music by Phil Collins and John Spillane.

............................................. Twenty-five years on, and Brian Kennedy is still only getting started. In recent times, music has been his medicine and he now embarks on a new exciting chapter, bringing new music and energy to the festival. His impressive catalogue of work spans from his debut album ‘The Great War Of Words’ to his original version of ‘You Raise Me Up’ and many, many more. He is a multi-platinum selling singer-songwriter, a highly-

regarded radio and television presenter, Doctor of Letters from University of Ulster, novelist and ‘Voice of Ireland’ coach. Brian was the featured vocalist with Van Morrison’s Blues &amp; Soul Revue for six years and has appeared on five Van albums. He was the lead singing performer in ‘Riverdance on Broadway’ at Manhattan’s Gershwin Theatre in an especially tailored role at the request of the composer Bill Whelan. Don’t miss what promised to be a most special night of music, closing the festival in the stunning surrounds of St. George’s Church. 19

Festival fun at The Dock &amp; The Leitrim Design House!

July Featured Maker: View an impressive collection of handcrafted wooden products in native timber from Roy Humphries, on view for the month July.

Ceramic Exhibition: Kathy Mooney’s ‘The Clay Menagerie’. Quirky animals each with their own personality, on view for the month of July.

ARTWALL Exhibition: ‘Silk art from the shoreline, through the woods and

TICKET BOOKING INFORMATION ·Festival Box Office services are provided by The Dock, located at St George’s Terrace, Carrick-on-Shannon, Co. Leitrim. ·Summer opening hours are Monday to Friday 10am-6pm, Saturday 10am-5pm and Sunday 1pm-5pm* until 18th August. ·Tickets can be booked in person, over the phone by calling +353 71 96 50828 or online at www.thedock.ie/events - booking fees apply. ·No refunds are permitted, all sales are final and tickets must be paid for at time of booking. ·Seating in all venues is unallocated however should you have any special accessibility requirements please contact the box office in advance so we may best accommodate your requirements. ·Doors open 30 minutes before performance start time. ·The Carrick Water Music Festival committee, its venues, partners and performers cannot accept any liability for loss or injury during the Festival, all festival-goers attend at their own risk. ·We reserve the right to make programme amendments in exceptional circumstances. ·The Festival and its agents reserves the right to photograph and film during all performances. By entering event premises, you consent to photography, audio and video recording and its/their release, publication, exhibition, or reproduction for promotion by the Festival and its affiliates and representatives. ·All information correct at time of print - E&amp;OE. 23