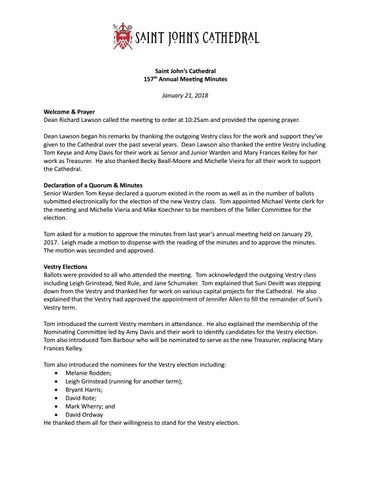 Saint John’s Cathedral 157th Annual Meeting Minutes January 21, 2018 Welcome &amp; Prayer Dean Richard Lawson called the meeting to order at 10:25am and provided the opening prayer. Dean Lawson began his remarks by thanking the outgoing Vestry class for the work and support they’ve given to the Cathedral over the past several years. Dean Lawson also thanked the entire Vestry including Tom Keyse and Amy Davis for their work as Senior and Junior Warden and Mary Frances Kelley for her work as Treasurer. He also thanked Becky Beall-Moore and Michelle Vieira for all their work to support the Cathedral. Declaration of a Quorum &amp; Minutes Senior Warden Tom Keyse declared a quorum existed in the room as well as in the number of ballots submitted electronically for the election of the new Vestry class. Tom appointed Michael Vente clerk for the meeting and Michelle Vieria and Mike Koechner to be members of the Teller Committee for the election. Tom asked for a motion to approve the minutes from last year’s annual meeting held on January 29, 2017. Leigh made a motion to dispense with the reading of the minutes and to approve the minutes. The motion was seconded and approved. Vestry Elections Ballots were provided to all who attended the meeting. Tom acknowledged the outgoing Vestry class including Leigh Grinstead, Ned Rule, and Jane Schumaker. Tom explained that Suni Devitt was stepping down from the Vestry and thanked her for work on various capital projects for the Cathedral. He also explained that the Vestry had approved the appointment of Jennifer Allen to fill the remainder of Suni’s Vestry term. Tom introduced the current Vestry members in attendance. He also explained the membership of the Nominating Committee led by Amy Davis and their work to identify candidates for the Vestry election. Tom also introduced Tom Barbour who will be nominated to serve as the new Treasurer, replacing Mary Frances Kelley. Tom also introduced the nominees for the Vestry election including:  Melanie Rodden;  Leigh Grinstead (running for another term);  Bryant Harris;  David Rote;  Mark Wherry; and  David Ordway He thanked them all for their willingness to stand for the Vestry election.

Tom made several calls for ballots to be turned in to the Teller Committee. The tellers (Michelle Vieria and Mike Koechner) collected the ballots and left the room to tally the votes. Administration for Stewardship Dean Lawson introduced Audrey Chapman, Assistant to the Cathedral Canons, and thanked her for her work on the stewardship campaign. Audrey thanked all in attendance for their pledges during the past several months and encouraged all to reach out to her if they ever have questions or concerns. Senior Warden’s Report Tom Keyse presented the Senior Warden’s report. He started his comments by thanking all who have committed time and treasure to the Cathedral’s mission. He outlined the Path to Sustainability that the Vestry committed to for 2018. He noted that the Vestry, staff, and parishioners have all worked hard to make sure the Cathedral was healthy and strong in terms of maintenance and staffing needs. Tom recapped several actions taken since last year’s annual meeting which included:  Welcoming new clergy and their families to Saint John’s;  Retiring all debt and committing to not funding future expenses with debt  Capital projects on the roof, lighting system, sound system, electrical system, and masonry; and  Continued work on repairs and upgrades for the elevator Tom also noted that the Cathedral ended 2017 with surplus of $200,000 and a 6 percent increase in pledging. Also in 2017, the Cathedral benefited from a large gift match campaign as well as the renewal of a Noble Energy mineral rights lease. He said that $300,000 was cut in expenses but staff and resources to accomplish ministry in 2018 were maintained. For 2018, the budget includes an approximately $175,000 deficit. Additionally, Tom said that the Cathedral’s endowment draw will be limited to liquid assets and interest-bearing obligations (including the Cathedral Ridge obligation to the Cathedral). In terms of property owned by the Cathedral, the Madison Street house was sold in 2017 for a $100,000 gain (which will be returned to the endowment and the Lawsons’ home (co-owned with the Cathedral) is currently being remodeled. The Cathedral will also be looking for alternative uses for the Kimberly building at 14 th and Clarkson. The lease with Wartburg College will end in December 2018 after discussion and agreement from both parties. Tom also outlined the reduced draw from the endowment beginning in 2020. The annual draw from the endowment will begin decreasing by .25 percent per year until a 4 percent draw is reached in 2023. Financial Report Mary Frances Kelley referred the meeting attendees to the annual meeting handout which outlined the pledging, projects, and finances for the Cathedral. She thanked Tom for including many of these items in his report. She also thanked Judy Allison for assisting the Cathedral with her time and talent in managing various capital projects. Mary Frances also thanked Becky Beall-Moore for all her work on the complex projects over the past year. Mary Frances noted the pledge history provided in the annual meeting handout. In 2015, there were 570 pledges totaling over $1.3 million. In 2018, there were 467 pledges totaling over $1.2 million. While the number of pledges has gone down over that time period, the total amount raised is almost the same. She thanked all those who have increased their support of the Cathedral in 2018.

Pastoral Care Canon Pastor Katie Pearson discussed the expansion of several pastoral care opportunities at Saint John’s. She said that over 50 individuals have expressed interest in serving in additional ways to reach out to parishioners in need. She appreciated the patience provided by the congregation as these efforts continue to build as well as the energy and enthusiasm to care for the Saint John’s community. Young Adults Canon Precentor Broderick Greer discussed the young adults ministry at Saint John’s. He noted that there were already many young adults at the Cathedral but that more engagement opportunities are needed for these parishioners. The monthly podcast “Mile High Theology” is designed to engage young adults in discussion at a location away from the Cathedral on meaning, existence, and belonging. Attendance at the first edition of this podcast was full. Broderick looked forward to continuing this event throughout the upcoming year. Broderick also expressed thanks for Saint John’s staff as well as all the lay volunteers for all their work on Sunday services. Saint Francis Apartments Fran Trujillo updated the group on the partnership with the new Saint Francis Apartments at Cathedral Square. She said that Saint John’s is planning intentional outreach and support in three ways:  Preparing a shared meal on Sunday at the Cathedral with the residents of the apartments;  Facilitating excursions in the community with residents and Saint John’s parishioners; and  Offering various classes taught by Saint John’s parishioners to the residents Anyone interested should contact Fran via email at fltrujillo6964@gmail.com. Questions &amp; Answers 1. A question was asked regarding the retirement of Stephen Tappe and the future of the music program at Saint John’s after his departure. Dean Lawson was thankful for all the work Stephen has done with the music program at Saint John’s, especially with the youth. He said that the Cathedral remained committed to the music program and believed the program would continue to thrive. He explained that the move from two choral services to one also necessitated new ideas in terms of music offerings and programming. He felt confident that Lyn would be able to provide leadership to the music program during the upcoming interim period. 2. A question was asked regarding a change in Sunday morning service times at the Cathedral and the reason why that change was made. Dean Lawson said that ideas generated at the Dreaming Together conference as well as desires among educators and Godly Play leaders/participants contributed to the service time change. The new times will allow for more formation time for all attendees on Sunday morning. 3. A question was asked regarding how the average pledge has changed over the past year and how pledging numbers relate to Sunday attendance. Dean Lawson said that Sunday attendance is closely related to pledging numbers. He noted that Becky Beall-Moore has the average pledge numbers available. Dean Lawson also noted that the upcoming Parochial Report for 2017 will show an increase in Sunday attendance at Saint John’s. That report will be available to parishioners. He believed that the change in service times will help increase numbers and create more opportunities for connection between parishioners and the clergy on Sunday morning.

4. A question was asked about the lease by Noble Energy and their plans to develop the land. Tom Keyse said that the lease was renewed for two years. The area is being explored but has not yet been developed. He said a committee of parishioners with expertise in oil and gas issues has been assisting the Cathedral in these discussions. 5. A question was asked on why the expenses for stewardship had decreased so much in the proposed 2018 budget. Becky Beall-Moore said that significant savings were realized with no canon steward on staff. Dean Lawson said that he will be the primary clergy lead for stewardship. 6. A question was asked regarding expanded orientation for lay readers. Dean Lawson said that Father Broderick would be leading those efforts. Vestry Election Results Tom Keyse announced the results of the Vestry election. The newly elected Vestry members were:  Leigh Grinstead  David Rote  Mark Wherry  Bryant Harris Motion to Adjourn Tom Keyse asked for a motion to adjourn the annual meeting. A motion was provided, seconded, and approved. Adjourned: 11:19am Respectfully submitted, Michael Vente Clerk to the Vestry 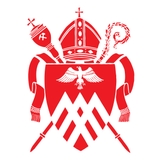