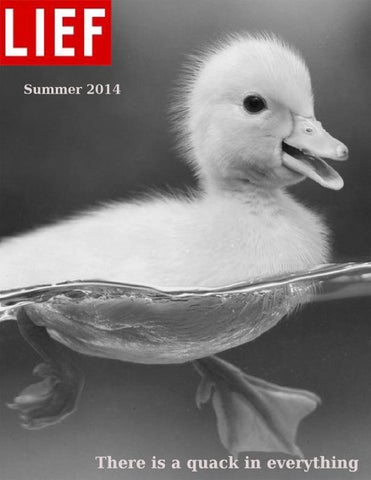 When Klecko and I came up with the idea of LIEF about three years ago, we wanted something fun to do that would involve other people.

Ladybird, ladybird, fly away home, Your house is on fire, Your children shall burn!

All I had going into the project as layout editor were two tools: a 10-year old version of Adobe Photoshop, which I had never quite mastered, and a copy of Adobe Acrobat that is almost as old. I had some experience as a newspaper layout editor from the 1970s, and had done a bit of digital publishing of my own work. I always liked the idea of words alongside pictures. It is the basis of all photojournalism, but I felt it went very deep in me.

The title LIEF came to me as an interpolation of Life Magazine. I liked the idea of setting up a low-budget phantom counterpart to history’s greatest magazine. And the word lief, I knew, had roots in classic literature, including Shakespeare. From the first page I laid out, I just knew what I would do. Every page would be like a broadside – a picture, or a picture with a poem. I know that doesn’t sound very specific, but I was firm on it. It had to be this way. This week, working on our fourth issue, I realized this marriage of words and pictures was what I encountered as a child. I especially remembered a collection of books my mother bought in the 1940s for my sister Kathy. The series was called Childcraft, and the covers were burnt-orange and two-color at most, black and one other. They were a “great books” collection published by W. F. Quarrie &amp; Company. Childcraft was a readaloud for small children, with quaint, unfunny pictures of fairies and genies and things. The editors didn’t seem to get kids, the way today’s books do. But they were better than a poke in the eye. I remember especially an ink drawing of a ladybug rushing home to save her babies from a fire. Quite horrifying to a child. I learned later that the rhyme references an agricultural technique of setting fire to farm vegetation to smoke the bugs out. But by then it was too late for this poor ladybird. You know she didn&#39;t get home in time.

I hadn’t thought of those books since I was small. I’m not much for the worship of all things dealing with childhood. But a part of me reached back over the years to imagine those pages again, and to model the pages I am doing today after them – sort of. The inner child remembers. Words and pictures. My guess is, most writers could live without them. I&#39;m not sure I can.

Things I Learn on Polish TV Sharon Chmielarz An electronic device straightens children’s backs. It harnesses shoulders and blares when they slump. It seems no child has thrown the gadget out the window, but at the beep, sits up straight before piano or computer. You can take a tour of Cold War missile sites in Texas. A school district there bought one for a dollar. It’s nice and bright twenty feet under; not one claustrophobic child’s face ﬂashes across the screen. One site, Valhalla, is ﬁlled with water. Imagine, on the Texas Plains, a heaven for scuba divers. On the Northern Plains a site sold for 40,000 dollars. Trick windows give an illusion of light, of being on earth, not under. The family room has a bar. Beer, karaoke, even a fake atrium. It’s great for parties, impossible to be a noisy neighbor. A shaft of sunlight plummets from the faraway sky.

What I Know For Sure Susan Koefod Deer plural is deer A wet glass will leave a ring on wood It is darkest before the dawn Low wind chills can kill you A groundhogâ&amp;#x20AC;&amp;#x2122;s shadow means nothing An egg will hard boil in about fifteen minutes Sheep plural is sheep Damp cold is colder than dry cold You can catch more flies with honey Heat escapes through your head The number thirteen is just a number

Milk tends to boil over the moment you turn away Goose plural is geese Water freezes at 32 degrees An apple a day keeps the doctor away Dressing in layers keeps you warmer Loose lips donâ&amp;#x20AC;&amp;#x2122;t sink ships Constant stirring helps avoid lumpy gravy Person plural is people and persons Water seeks the lowest level Count to ten if you feel angry We all eventually die Global warming is no myth Always refrigerate unused portions

You Are Now Leaving Pioneer Valley Gavin Corey If you drifted down the Mass Pike long enough And coasted off an exit, you would see a sign &quot;Granite for sail.&quot;

Last time I went there, They changed it.

Two Poems by Tim J. Brennan After I Die No need to bury me; just lay me down in weeds, face up so I can look at the moon as I try to remember what the hell I did to get to such a place so far from home.

Two Poems by Tim Nolan Roasted Chicken I’m writing this on the cutting board after one hour of the Amish chicken roasting in the oven. How can I say this other than directly?— He is beautiful—brown and still cooking here On the cutting board—he&#39;s so beautiful—all fat in the breast—his legs sticking out—I salted him All over—upside and down—in the dark cavity of him—the salt draws in the moisture of him. Praise to his little absent brain—his beak—his pecking intentions for the bit of grain—I&#39;m sorry But hungry—writing here in red ink—the splotched grease of him—smeared here with my words—

Gettysburg Remember how we got out of the car at 1:30 a.m. in the foggy heat and passed along the sidewalks through the seminary campus and out to the field? That field where Pickett made his charge. And do you remember how it was a time of ghosts everywhere rising with the hot dew? And you were a little boy and I was much younger than I am nowâ&amp;#x20AC;&amp;#x201D;leanerâ&amp;#x20AC;&amp;#x201D; and we walked a ways into the field the crickets and hoppers jumping up before our feet and we didnâ&amp;#x20AC;&amp;#x2122;t talk at all all the way across the field and when we went far enough a certain distance I said something and you agreed and so we turned back.

Jack raised Kerouac’s last empty to the light as he drowned in esophageal blood. Saw the beat poet’s ghost trapped, so Jack shattered the glass and released Kerouac’s Dharma to the road.

Jack sat beside Woody Guthrie’s bed in Creedmoor asylum, and gently squeezed his hand. He exhaled his last breath . . . poet’s mind and body becoming this land.

Jack stood at the crossroads at midnight learning blues poems from Robert Johnson. When the devil showed up, shook hands all around, then Old Nick and Robert went on down.

Jack sang Sundance songs as he mopped up brains of Iron Range communist and friend Al Nurmi, salvaged his manuscripts of poems and tall tales from the public-assistance high-rise.

In the alley behind the Memphis blood bank Jack’s old mentor chants The Idea of Ancestry and recites toasts. When he drank, he crapped his pants and stank. Jack still tells lies to Etheridge Knight’s ghost.

Formative Years Kevin M. Hibshman My mom called me today to tell me that my third-grade reading teacher had passed away, age 73. I flashed back to a vague memory of her. I admired her because she was a true rebel in a town that frowned on any hint of nonconformity. I already knew I was destined for a life of breaking rules and bending codes and she was living proof one could attempt to do just that and still carve some kind of niche in a hateful, oppressive atmosphere. She wore huge fake finger nails painted in lurid colors and sported short, spiky hair tinged purplish-red years before anyone thought up punk rock. Her chunky jewelry and the peace sign posters in her classroom made her an icon. The best project we did under her tutelage was making a collective book of haikus which we tie-dyed psychedelic covers for. I still have mine.

My sister Kathy, when she was thirteen, put

on plays in our old brick garage, in the apple

We set up lawn furniture ion the concrete

orchard in Ohio where our family rented a

apron by the garage door. A bedsheet draped

with a leaky heart

was a kind of red

violet in color. She

was not ugly; in

fact she was a pretty girl, cheerful despite her

The play was called Mrs. McGillicuddy In

weak heart, enthusiastic despite the death

Rome, about a lady from Hartford who acts

sentence nature had handed her.

highhandedly on a trip to Europe. Brian

Kathy had a friend at the same end of Park

played the purser on the transatlantic

Avenue as us, named Brian Stashick, a good

crossing. The playlet was really just a series of

looking boy with a nice sense of humor. He

exasperating moments, in which Mrs.

McGillicuddy snippily explained what she was

entitled to as an American tourist, while Brian

I wish I could tell him thank you, for being

gulped and attempted to comply with her

such a fine friend to Kathy, for making her

demands, to great comic effect. There were

happy, for being the only man she would

know in her life.

and telling asides to the audience. The two young actors were both very good, having learned their lines and determined to be troopers. People whistled and clapped enthusiastically from their folding chairs. I remember this because I have a photograph somewhere from the play â&amp;#x20AC;&amp;#x201C; I wish I could locate it today. In the picture, Kathy, frail but pretty, is standing with her hands on her hips, badgering Brian in her high-breaking voice about where to set the luggage. Brian, wearing blue jeans and a striped T-shirt, gives as well as he gets. It is a favorite picture. It reminds me that, though Kathy knew she had already outlived her life expectancy, she was determined to have fun and leave a mark. She did so until May 5, 1961, the day she died, age fifteen. She remains, after all these years, the inspiration of my life. Brian would go on to be a high school thespian, do a tour of duty in Vietnam, and find work in commercials and soap operas. I have tried to contact him but been unable to. 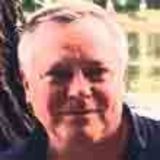