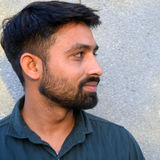 Raghurajpur has long been the home of the exquisite art. The Pattachitra paintings, Gotipua dance, paper masks are all important part of the rituals around Jagannath temple in Puri.The village having present at the bank of river ‘Bhargabi’ must have been the settelment of artisans since centuries, after the Jagannath temple of Puri was built at thirteen centuries.

The name Raghurajpur derives from ‘Raghuraj’ which literally means King Raghu which is a synonym to Lord Rama in Hindu mythology. According to a popular lore, it is believed that Lord Rama stayed at this palce for a short while during his fourteen years of exile.

There is a very interesting story on how these art form came into being. According to the legend, on ‘Debasnana Purnima’, Lord Jagannath and his siblings take bath in cold water on a hot day and fall sick for 15 days. Due to their illness, their darshan was not possible and so the tradition of making “Anasar Patti” started so that pilgrims can still pray to the Gods, represented on paper, though.

Around, 2000 it was developed as a heritage village by The Indian national Trust for Art

& Cultural Heritage (INTACH), and soon became a major rural tourist destination of the state, drawing tourist, both domestic and foreign to the village. Villagers were also trained to provide heritage walks to the visitors by the organisation, and has since become a template for heritage tourism in the region. History cover page: Wall painting in Raghurajpur, low fedility

14.A pattachitra painting of Lord Jagannath, Bhalabhdra and Subhadra

15. Board at the entrance of the village

Masks were worn by performers during several occasions of performing dances or acts, since the eleventh century when the King of Kalinga ‘Kharavela Deva’ promoted music and dance as organised performances across his capital. The first masks were made up of wood and moved on to light weight materials with the popularise usage of paper later. Mask made with only paper used to get sweaty and ruined the paints and the physical form, so a composite of paper, cow dung and clay was used to make the mask sturdy as well as light weight. Nowadays mostly the craft is produced for decorative purpose.

The history of folk theatre also known as ‘Jatra’ in regional parlance has been a dominant influence on this craft. The characters of these Jatras are made of wood, ‘Sholapith’ and Paper Mache and are vividly painted to appear attractive. The characters are dressed according to the roles played by them and are controlled by strings. Based on the characterizations, masks are used by the artists. This has given rise to the art of making masks from paper. 17. Kandhei naacha, a folk theatre practice in odisha

different characters of the Ramayan during the Sahi Jata holds special significance to them. It is like a service they offer to the dieties through expression of their skills.

This is perhaps the only village in India, where each family is engaged in one craft or the other such as Patta paintings, palm leaf engravings, stone carvings, paper mache toys and masks, wood carvings, wooden toys, cow dung toys and Tassar paintings.

Each craft is unique but follows the same art form, can be identified by some distinguishing features that the figures display. The figures would be characterised by long beak-like noses, prominent chins, and elongated eyes. Each figure can be distinguished from the other by facial features, hairstyles, clothing, etc. The main themes of all the crafts have always been inspired by Lord Jagannath and the Vaishnava sect.Materials used for the most of the crafts are also similar, like the type of brush used for artwork, the raw material for adhesive, the derived natural colors.

One come across the best tradition of Odisha paintings and some of the finest pieces of artwork in this village.