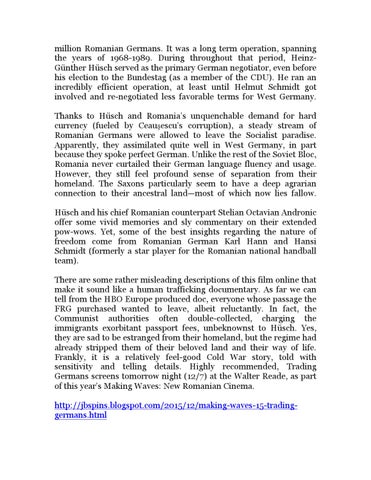 million Romanian Germans. It was a long term operation, spanning the years of 1968-1989. During throughout that period, HeinzGünther Hüsch served as the primary German negotiator, even before his election to the Bundestag (as a member of the CDU). He ran an incredibly efficient operation, at least until Helmut Schmidt got involved and re-negotiated less favorable terms for West Germany. Thanks to Hüsch and Romania’s unquenchable demand for hard currency (fueled by Ceauşescu’s corruption), a steady stream of Romanian Germans were allowed to leave the Socialist paradise. Apparently, they assimilated quite well in West Germany, in part because they spoke perfect German. Unlike the rest of the Soviet Bloc, Romania never curtailed their German language fluency and usage. However, they still feel profound sense of separation from their homeland. The Saxons particularly seem to have a deep agrarian connection to their ancestral land—most of which now lies fallow. Hüsch and his chief Romanian counterpart Stelian Octavian Andronic offer some vivid memories and sly commentary on their extended pow-wows. Yet, some of the best insights regarding the nature of freedom come from Romanian German Karl Hann and Hansi Schmidt (formerly a star player for the Romanian national handball team). There are some rather misleading descriptions of this film online that make it sound like a human trafficking documentary. As far we can tell from the HBO Europe produced doc, everyone whose passage the FRG purchased wanted to leave, albeit reluctantly. In fact, the Communist authorities often double-collected, charging the immigrants exorbitant passport fees, unbeknownst to Hüsch. Yes, they are sad to be estranged from their homeland, but the regime had already stripped them of their beloved land and their way of life. Frankly, it is a relatively feel-good Cold War story, told with sensitivity and telling details. Highly recommended, Trading Germans screens tomorrow night (12/7) at the Walter Reade, as part of this year’s Making Waves: New Romanian Cinema. http://jbspins.blogspot.com/2015/12/making-waves-15-tradinggermans.html 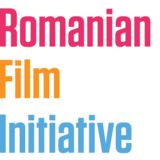