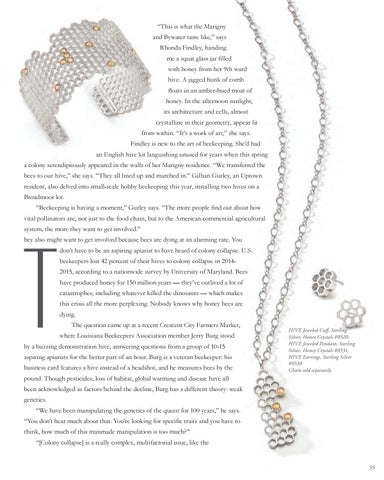 “This is what the Marigny and Bywater taste like,” says Rhonda Findley, handing me a squat glass jar filled with honey from her 9th ward hive. A jagged hunk of comb floats in an amber-hued moat of honey. In the afternoon sunlight, its architecture and cells, almost crystalline in their geometry, appear lit from within. “It’s a work of art,” she says. Findley is new to the art of beekeeping. She’d had an English hive kit languishing unused for years when this spring a colony serendipitously appeared in the walls of her Marigny residence. “We transferred the bees to our hive,” she says. “They all lined up and marched in.” Gillian Gurley, an Uptown resident, also delved into small-scale hobby beekeeping this year, installing two hives on a Broadmoor lot. “Beekeeping is having a moment,” Gurley says. “The more people find out about how vital pollinators are, not just to the food chain, but to the American commercial agricultural system, the more they want to get involved.” hey also might want to get involved because bees are dying at an alarming rate. You don’t have to be an aspiring apiarist to have heard of colony collapse. U.S. beekeepers lost 42 percent of their hives to colony collapse in 20142015, according to a nationwide survey by University of Maryland. Bees have produced honey for 150 million years — they’ve outlived a lot of catastrophes, including whatever killed the dinosaurs — which makes this crisis all the more perplexing. Nobody knows why honey bees are dying. The question came up at a recent Crescent City Farmers Market, where Louisiana Beekeepers Association member Jerry Burg stood by a buzzing demonstration hive, answering questions from a group of 10-15 aspiring apiarists for the better part of an hour. Burg is a veteran beekeeper: his business card features a hive instead of a headshot, and he measures bees by the

pound. Though pesticides, loss of habitat, global warming and disease have all been acknowledged as factors behind the decline, Burg has a different theory: weak genetics. “We have been manipulating the genetics of the queen for 100 years,” he says. “You don’t hear much about that. You’re looking for specific traits and you have to think, how much of this manmade manipulation is too much?” “[Colony collapse] is a really complex, multifactorial issue, like the 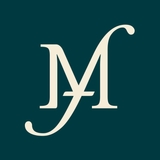