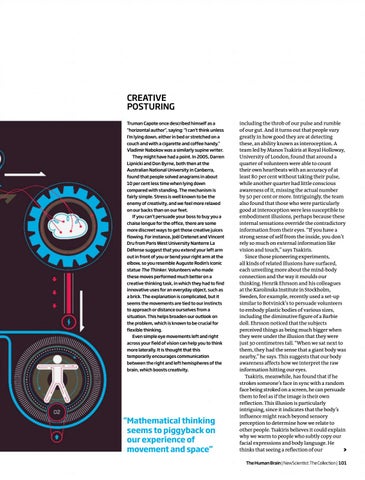 WorldMags.net CREATIVE POSTURING Truman Capote once described himself as a “horizontal author”, saying: “I can’t think unless I’m lying down, either in bed or stretched on a couch and with a cigarette and coffee handy.” Vladimir Nabokov was a similarly supine writer. They might have had a point. In 2005, Darren Lipnicki and Don Byrne, both then at the Australian National University in Canberra, found that people solved anagrams in about 10 per cent less time when lying down compared with standing. The mechanism is fairly simple. Stress is well known to be the enemy of creativity, and we feel more relaxed on our backs than on our feet. If you can’t persuade your boss to buy you a chaise longue for the office, there are some more discreet ways to get those creative juices flowing. For instance, Joël Cretenet and Vincent Dru from Paris West University Nanterre La Défense suggest that you extend your left arm out in front of you or bend your right arm at the elbow, so you resemble Auguste Rodin’s iconic statue The Thinker. Volunteers who made these moves performed much better on a creative thinking task, in which they had to find innovative uses for an everyday object, such as a brick. The explanation is complicated, but it seems the movements are tied to our instincts to approach or distance ourselves from a situation. This helps broaden our outlook on the problem, which is known to be crucial for flexible thinking. Even simple eye movements left and right across your field of vision can help you to think more laterally. It is thought that this temporarily encourages communication between the right and left hemispheres of the brain, which boosts creativity.

including the throb of our pulse and rumble of our gut. And it turns out that people vary greatly in how good they are at detecting these, an ability known as interoception. A team led by Manos Tsakiris at Royal Holloway, University of London, found that around a quarter of volunteers were able to count their own heartbeats with an accuracy of at least 80 per cent without taking their pulse, while another quarter had little conscious awareness of it, missing the actual number by 50 per cent or more. Intriguingly, the team also found that those who were particularly good at interoception were less susceptible to embodiment illusions, perhaps because these internal sensations override the contradictory information from their eyes. “If you have a strong sense of self from the inside, you don’t rely so much on external information like vision and touch,” says Tsakiris. Since those pioneering experiments, all kinds of related illusions have surfaced, each unveiling more about the mind-body connection and the way it moulds our thinking. Henrik Ehrsson and his colleagues at the Karolinska Institute in Stockholm, Sweden, for example, recently used a set-up similar to Botvinick’s to persuade volunteers to embody plastic bodies of various sizes, including the diminutive figure of a Barbie doll. Ehrsson noticed that the subjects perceived things as being much bigger when they were under the illusion that they were just 30 centimetres tall. “When we sat next to them, they had the sense that a giant body was nearby,” he says. This suggests that our body awareness affects how we interpret the raw information hitting our eyes. Tsakiris, meanwhile, has found that if he strokes someone’s face in sync with a random face being stroked on a screen, he can persuade them to feel as if the image is their own reflection. This illusion is particularly intriguing, since it indicates that the body’s influence might reach beyond sensory perception to determine how we relate to other people. Tsakiris believes it could explain why we warm to people who subtly copy our facial expressions and body language. He thinks that seeing a reflection of our > TheHumanBrain | NewScientist:TheCollection | 101 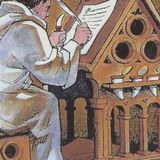