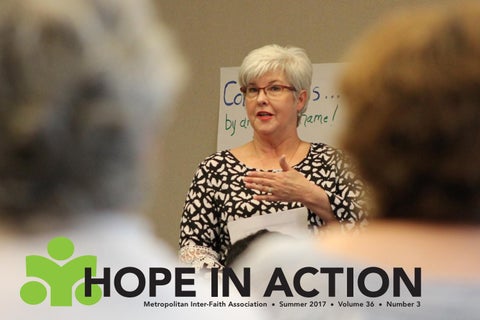 MIFA BOARD OF DIRECTORS

Dear friends, As many of you know, MIFA began as a volunteer-driven advocacy agency in 1968 following the assassination of Dr. Martin Luther King, Jr. In the 1970s, we began providing direct services for the community and became a multifaceted safety-net organization. While advocacy is an important part of MIFA’s legacy, in recent years we have not been as tactical about our advocacy work. Consequently, our current strategic plan includes advocacy initiatives as a means of using our voices as committed and informed champions of our cause. We believe service and advocacy reinforce each other and are necessary for achieving our mission. Our key advocacy issues are senior hunger, preventing family homelessness, and interfaith relations. Our focus on senior hunger has accelerated because of the immediate need for awareness of the proposed federal budget’s potential impact on MIFA, especially our Meals on Wheels and Senior Companion programs. We are diligently watching as the budget process unfolds over the summer. We receive federal funding through the Older Americans Act administered by the U.S. Department of Health and Human Services; this support for MIFA Meals on Wheels may be at risk. But the reality is, with or without potential budget cuts, federal funding for Meals on Wheels fails to keep pace with demographic shifts and escalating need. We are also monitoring funding for the Corporation for National and Community Service, which supports MIFA’s Senior Companion program.

So, stay tuned. We’ll share more information about our key issues, like we’re doing in this edition of Hope in Action with the No Hungry Senior update.

Finally, thanks to everyone who contacted members of Congress urging them to protect and strengthen funding for Meals on Wheels and who shared their personal testaments to MIFA’s work on social media. We appreciate your joining us as we reinvigorate of our advocacy efforts.

MIFA by contributing her professional leadership coaching skills and talents. 2

Volunteer shares special skills Cathy VanLeit believes that every person is uniquely gifted and possesses the ability to change and transform their future. That philosophy has served her well in a variety of impressive career roles such as HR Business Partner, Master Change Manager, and Leadership Development Coach among others. Cathy worked for nearly 23 years at Medtronic, has a Masters in executive leadership, and several HR certifications including one in ethical leadership. She now has her own company, VanLeit Consulting, LLC.

Through a series of meetings and experiential workshops, Cathy’s work with MIFA senior staff has focused on leadership self-awareness and potential areas of growth, communication through coaching, and employee performance management. As a Certified Professional Coach, Cathy introduced the value of leadership development coaching and provides individual coaching to members of MIFA’s leadership team. To ensure a culture of performance and accountability, a goal area in MIFA’s current three-year strategic plan, Cathy, in her most recent project, has identified critical skills and expectations for nine key areas of leadership competencies to develop the next generation of staff leadership.

She was a member of MIFA’s board of directors from 2009 to 2015 and she continues her commitment to the organzation today by generously sharing her professional expertise, knowledge, and talent in a volunteer capacity. Skill-based volunteering, like Cathy’s MIFA engagement, has become one of the most sought-after ways to give back to nonprofit organizations. It leverages specialized skills of individuals to strengthen the infrastruture of nonprofits, helping them sustain capacity and achieve their missions. The organization benefits from in-kind expertise and the volunteer contributes to a cause they believe in—many times providing a creative change from their daily work.

Cathy says, “It is such a pleasure to partner with the MIFA team as we generate strategies and leverage strengths to accelerate individual and organizational growth. Each time I visit MIFA’s office, I’m overwhelmed by the longevity of employee tenure and the heartfelt commitment of everyone involved in serving the community.”

No Hungry Senior program offers nutrition and much more Headlines alert us to the impact of the aging of America. The “silver tsunami” or “age wave” is already here as over 10,000 Baby Boomers reach the age of 65 every single day. One quarter of today’s 65-year-olds will live past the age of 90 and will experience many of their daily chores turning into insurmountable challenges. These seniors already represent the fastest growing population segment in the U.S. In Shelby County, there are over 113,000 seniors according to the last census conducted in 2015—a number that has grown 18.3% since 2010. Of those local seniors, nearly 30% live alone and are therefore at greater risk for depression, malnutrition, and hunger. A study by the Plough Foundation found that nearly 3,700 Shelby County seniors are food-insecure, the state of being without reliable access to sufficient quantity of affordable, nutritious food. A waiting list for local senior services—mostly Meals on Wheels— managed by the Aging Commission of the Mid-South is estimated at over 2,000 individuals and is growing. In order to meet the growing need among frail, isolated, and foodinsecure senior Memphians, MIFA established No Hungry Senior in 2015, a collaboration funded by The Plough Foundation that includes Aging Commission of the Mid-South, Baptist Memorial Healthcare, Catholic Charities of West Tennessee, CoactionNet, Memphis Jewish Federation, Methodist Healthcare, Mid-South Food Bank, and the University of Memphis School of Public Health.

Dr. Debra Bartelli, Research Associate Professor, Division of Epidemiology, Biostatistics, and Environmental Health at University of Memphis, leads the monitoring and evaluation of ongoing No Hungry Senior client assessments. Generally, the 1,476 clients receiving meals through No Hungry Senior reflect the larger population served by our Meals on Wheels program. Our No Hungry Senior client evaluations show: 63% are female, 76% are African American, the average age is 75, 48% receive a monthly income of less than $1,000, 45% live alone, and 41% report being lonely. Clients report high rates of diabetes (45%), high blood pressure (82%), ER visits (63%), hospitalizations (53%), and about 75% rate their health as fair or poor. There were significant findings when reassessed after one year of receiving MIFA meals. As result of the program, clients reported:

90 % eat healthier foods. 84 % achieved or maintained healthy weight. 87 % feel better. 83 % feel less hungry throughout the day. Loneliness scores improved for 52% of the clients, and the number who reported only eating one meal a day decreased from 72% at the initial assessment to 18%.

When surveying our regular meals on wheels client base, MIFA data backs up national findings from research conducted by Meals on Wheels America.

89 % of MIFA clients believe the program helps improve their health compared to 83% nationally. 95 % of MIFA clients believe the program allows them to continue living at home compared to 92% nationally. According to Dr. Bartelli, “Considering the age and frailty of the No Hungry Senior clients, the fact that health factors did not worsen over time should be viewed as a positive finding.” The statistics reaffirm that Memphis-area seniors benefit from the nutritional and social support our program offers. And, by next spring, we expect to enroll and serve at least 1,600 new clients through the No Hungry Senior collaborative.

✓ Improvement in feelings of loneliness

✓ Reductions in worrying about being able to remain at home

MIFA supporters, leaders, and friends recently gathered at the home of Deborah and Bob Craddock to celebrate the successful completion of the Campaign to Endow Independence. This critical financial safety net will ensure the continuation of MIFA’s high-impact programs and leadership for years to come. We are grateful to those who gave so generously to support the MIFA Independence Fund.

MIFA gratefully acknowledges the following annual gifts of cash or stock received October 1, 2016, through March 31, 2017. Your annual gifts help MIFA meet the current needs of vulnerable seniors and families in crisis with high-impact services that sustain and support them. For a complete listing of recent gifts, please visit mifa.org/contributions.

Thanks also to the No-Go Gala no-shows, who stayed home and donated their expenses for a fancy party to MIFA, and to Tom Martin for the note card collection designs.

Tributes IN HONOR OF:

AutoZone was recently awarded MIFA’s Pathfinder Award in recognition of the company’s decades-long relationship with MIFA. AutoZone contributed to The MIFA Independence Fund, an endowment to sustain high-impact programs and leadership. They are the new presenting sponsor of MIFA’s Emergency Services program, which assists individuals who have experienced a temporary crisis with rent, mortgage payments, utilities, and food. In addition to financial support, AutoZone’s exceptional partnership includes ongoing volunteer engagement and board leadership.

MIFA places the highest priority on protecting the privacy of our donors and volunteers and holds all information in strict confidence. Donor/volunteer information is never traded, sold, or rented. If at any time you wish to be removed from any of our communications lists or if you have other questions or concerns, simply contact the Advancement office by phone at (901) 529-4502.

FOR THE BIRTHDAY OF:

FOR THE ANNIVERSARY OF:

You can be a pillar for our neighbors in need!

You can be a

Become a recurring monthly MIFA donor. Your gift will impact the lives of vulnerable seniors and families in crisis. $

pillar  for our neighbors in need!

Keeps the lights on for a working poor family.

MIFA donor. Your on giftwheels will impact Provides a senior with meals for one month. lives of vulnerable seniors 100the per month

Helps connect a family with permanent stable housing. and families in crisis.