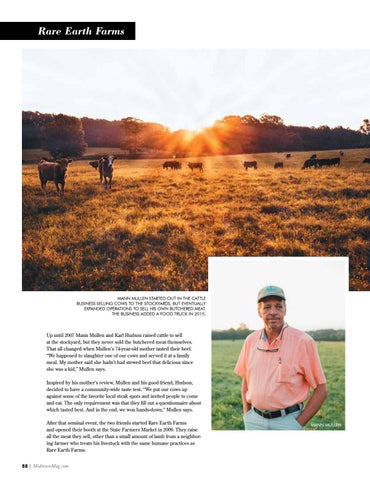 MANN MULLEN STARTED OUT IN THE CATTLE BUSINESS SELLING COWS TO THE STOCKYARDS, BUT EVENTUALLY EXPANDED OPERATIONS TO SELL HIS OWN BUTCHERED MEAT. THE BUSINESS ADDED A FOOD TRUCK IN 2015.

Up until 2007 Mann Mullen and Karl Hudson raised cattle to sell at the stockyard, but they never sold the butchered meat themselves. That all changed when Mullen’s 74-year-old mother tasted their beef. “We happened to slaughter one of our cows and served it at a family meal. My mother said she hadn’t had stewed beef that delicious since she was a kid,” Mullen says. Inspired by his mother’s review, Mullen and his good friend, Hudson, decided to have a community-wide taste test. “We put our cows up against some of the favorite local steak spots and invited people to come and eat. The only requirement was that they fill out a questionnaire about which tasted best. And in the end, we won hands-down,” Mullen says. After that seminal event, the two friends started Rare Earth Farms and opened their booth at the State Farmers Market in 2009. They raise all the meat they sell, other than a small amount of lamb from a neighboring farmer who treats his livestock with the same humane practices as Rare Earth Farms. 88 | MidtownMag.com