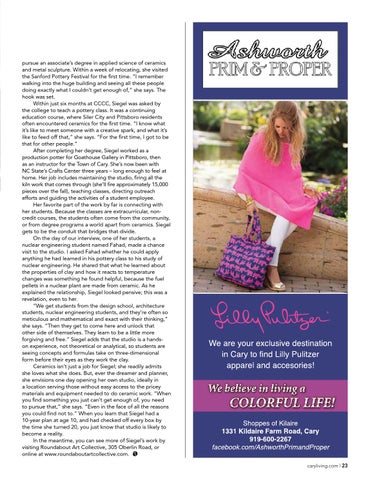 pursue an associate’s degree in applied science of ceramics and metal sculpture. Within a week of relocating, she visited the Sanford Pottery Festival for the first time. “I remember walking into the huge building and seeing all these people doing exactly what I couldn’t get enough of,” she says. The hook was set. Within just six months at CCCC, Siegel was asked by the college to teach a pottery class. It was a continuing education course, where Siler City and Pittsboro residents often encountered ceramics for the first time. “I know what it’s like to meet someone with a creative spark, and what it’s like to feed off that,” she says. “For the first time, I got to be that for other people.” After completing her degree, Siegel worked as a production potter for Goathouse Gallery in Pittsboro, then as an instructor for the Town of Cary. She’s now been with NC State’s Crafts Center three years – long enough to feel at home. Her job includes maintaining the studio, firing all the kiln work that comes through (she’ll fire approximately 15,000 pieces over the fall), teaching classes, directing outreach efforts and guiding the activities of a student employee. Her favorite part of the work by far is connecting with her students. Because the classes are extracurricular, noncredit courses, the students often come from the community, or from degree programs a world apart from ceramics. Siegel gets to be the conduit that bridges that divide. On the day of our interview, one of her students, a nuclear engineering student named Fahad, made a chance visit to the studio. I asked Fahad whether he could apply anything he had learned in his pottery class to his study of nuclear engineering. He shared that what he learned about the properties of clay and how it reacts to temperature changes was something he found helpful, because the fuel pellets in a nuclear plant are made from ceramic. As he explained the relationship, Siegel looked pensive; this was a revelation, even to her. “We get students from the design school, architecture students, nuclear engineering students, and they’re often so meticulous and mathematical and exact with their thinking,” she says. “Then they get to come here and unlock that other side of themselves. They learn to be a little more forgiving and free.” Siegel adds that the studio is a handson experience, not theoretical or analytical, so students are seeing concepts and formulas take on three-dimensional form before their eyes as they work the clay. Ceramics isn’t just a job for Siegel; she readily admits she loves what she does. But, ever the dreamer and planner, she envisions one day opening her own studio, ideally in a location serving those without easy access to the pricey materials and equipment needed to do ceramic work. “When you find something you just can’t get enough of, you need to pursue that,” she says. “Even in the face of all the reasons you could find not to.” When you learn that Siegel had a 10-year plan at age 10, and had checked off every box by the time she turned 20, you just know that studio is likely to become a reality. In the meantime, you can see more of Siegel’s work by visiting Roundabout Art Collective, 305 Oberlin Road, or online at www.roundaboutartcollective.com. L