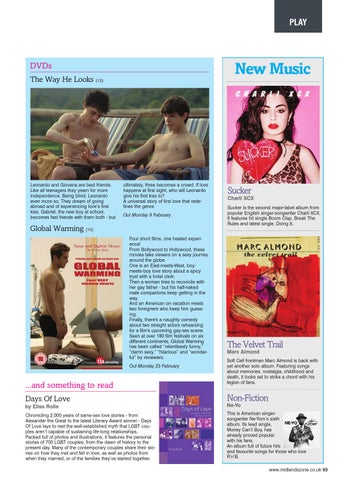 Leonardo and Giovana are best friends. Like all teenagers they yearn for more independence. Being blind, Leonardo even more so. They dream of going abroad and of experiencing love’s first kiss. Gabriel, the new boy at school, becomes fast friends with them both - but

ultimately, three becomes a crowd. If love happens at first sight, who will Leonardo give his first kiss to? A universal story of first love that redefines the genre. Out Monday 9 February

Global Warming (15) Four short films, one heated experience! From Bollywood to Hollywood, these movies take viewers on a sexy journey around the globe. One is an East-meets-West, boymeets-boy love story about a spicy tryst with a hotel clerk. Then a woman tries to reconcile with her gay father - but his half-naked male companions keep getting in the way. And an American on vacation meets two foreigners who keep him guessing. Finally, there's a naughty comedy about two straight actors rehearsing for a film's upcoming gay-sex scene. Seen at over 180 film festivals on six different continents, Global Warming has been called “relentlessly funny,” “damn sexy,” “hilarious” and “wonderful” by reviewers. Out Monday 23 February

...and something to read

The Velvet Trail Marc Almond Soft Cell frontman Marc Almond is back with yet another solo album. Featuring songs about memories, nostalgia, childhood and death, it looks set to strike a chord with his legion of fans.

Chronicling 2,000 years of same-sex love stories - from Alexander the Great to the latest Literary Award winner - Days Of Love lays to rest the well-established myth that LGBT couples aren’t capable of sustaining life-long relationships. Packed full of photos and illustrations, it features the personal stories of 700 LGBT couples, from the dawn of history to the present day. Many of the contemporary couples share their stories on how they met and fell in love, as well as photos from when they married, or of the families they’ve started together.

This is American singersongwriter Ne-Yom’s sixth album. Its lead single, Money Can’t Buy, has already proved popular with his fans. An album full of future hits and favourite songs for those who love R’n’B. www.midlandszone.co.uk 55