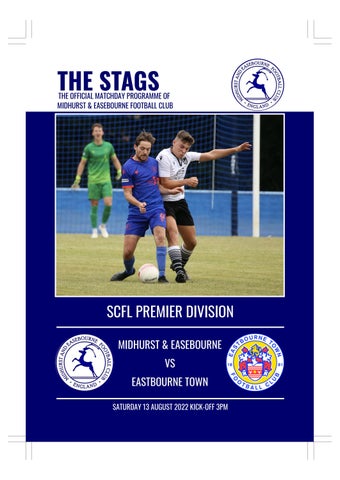 The club has 2 senior teams and 8 youth teams. The First Team are currently members of the Southern Combination Football League and compete in Division 1, whilst the Reserves play in the East Division of the Hampshire Development League. The club was established in 1946 by a merger of Midhurst, whose ground had been used to build a school on, and Easebourne, who had lost several officials and players during the World War II. They joined the West Sussex League and went on to win the title in 1955–56, 1962–63 and 1964–65, as well as the Malcolm Simmonds Memorial Cup in 1959– 60. After the top division was renamed the Premier Division, the club won the league again in 1967–68, the Bareham Cup in 1970–71 and the Malcolm Simmonds Memorial Cup in 1973–74. They won the Premier Division and Malcolm Simmonds Memorial Cup double in 1976–77 and retained the cup the following season, before winning another league and cup double in 1979–80. Although an application to join the Sussex County League was rejected in 1980, they were accepted into the league the following year, becoming members of Division Two.

Good afternoon, welcome back to The Rotherfield, where we start a run of four Home games.

Last Saturday was an historic day for the football club playing in the Emirates FA Cup for the first time, convincingly beating AFC Uckfield Town 4-1. Which gives us an Home tie Saturday 20th August.

I would like to welcome Eastbourne Town’s staff, players, committee members and their supporters, hope you had a good journey up Todays visitors beat us last season six nil in to us. the Sussex Senior Cup on the night it was a success as we fielded three under 18s, that was a great experience for them seeing Like to extend my welcome to today’s what’s required at this level. Eastbourne Match Officials. themselves have made a good start. I expect nothing more from them as their one of the We’ve now played three fixtures, I’m happy big sides in this league, today we really need with the start we’ve made. I got our targets to go up another level which is well within for the season, I’ve told the lads they can us, failure to do so could result in a long play the opening month before I let them afternoon. know what we’re aiming for. Reason behind this is it’s a new level, I want them to realise Squad wise there’s a few knocks nothing too they’re very capable of playing at it first. ‘Not serious, those with knocks will be assessed thinking he’s barmy’ as they need to buy prior to todays game nobody will be pushed into what we want to achieve. as we’ve got a busy schedule, if we need to rotate a couple, we’re have no worries doing We started at Home vs Bexhill Utd who are this. a very strong side and will definitely be up there come end of the season so to get a Enjoy the game point we were very happy with that. We could of nicked it late on but I told the Lemmy lads we started with a point that’s minimum I wanted after the 90 minutes. We followed that up on Tuesday evening with our first win at Step 5 away to Hassocks, we made very hard work of it on the night twice getting a three goal lead and letting them back in. Few stern words at the break, we defended well second half, had that bit of luck on our side when required.

AFC Uckfield Town 1 v 4 Midhurst &amp; Easebourne Stags made there debut in the Emirates FA Cup with a convincing victory away to fellow Southern Combination Premier side AFC Uckfield Town. Stags started really well and had there hosts on the back foot from the first whilst. The opening goal arrived in the 9th minute, Harry Giles was picked out from a throw on the right, he put a good cross into the penalty area, with Liam Dreckmann heading home to give Stags the lead. Stags never let up with the second arriving minutes later. Dreckmann won a 50/50’challenge on the half way played a great ball over the top of the defence with Billy Connor though on goal, leaving him to fire past Nathaniel Gibb. Stags continued to dominate Gibb making a coupe of smart saves. When he was beaten Connor’s effort came back of the crossbar after good work from Kieran Carter.

Uckfield showed there intent from the start of the second half by clearing getting bodies forward. Stags stayed organised , it was the Stags who has the first real chance of the half. In the 53rd minute Harry Tremlett won the ball in midfield played a great ball into Connor who picked out Tremlett who continued his run, cooly beating Gibb giving Stags a three goal advantage. Stags stood firm until the 88th minute when Uckfield did pull a goal back with Jamie Blackfield stabbing home a loose ball. Uckfield throw everything at the Stags in closing minutes, Charlie Osbourne won the ball, played in Marcus Bedford who raced clear slotting home to seal an impressive victory the Stags Stags boss Andy Ewen was full of praise for his side. It’s great for the club, we’ve made more history, I can’t praise them enough after that. Were enjoy the moment, I won’t let them get carried away, we’re be back in training twice next week working hard as things can change very quickly in football.

Eastbourne Town is the oldest senior football club in Sussex having been founded in 1881 as Devonshire Park, being named after its first home ground – A venue now known for staging one of the premier preWimbledon tennis tournaments. In fact, it was the arrival of tennis at the ground

which ultimately was to lead to it becoming the predominant sport and the subsequent relocation of both cricket and football. After five years of playing at the Park, the football club moved to the newly opened “Saffrons Field” colourfully named after the variety of crocus which had originally been cultivated on the site for use in the preparation of medicines. In 1889 the club changed its name to Eastbourne and fielding a side of ‘gentlemen amateurs’ began to play a dominant role in county football winning the Sussex Senior Cup eight times, and being runners-up on a further three occasions, up to 1907. The first grandstand was built in 1894 and at the turn of the century the whole complex was enlarged by the incorporation of Larkins Field. In 1907 the club split from the Football Association and aligned itself with the then Amateur Football Alliance becoming founder members of the Southern Amateur League where they remained until after World War II. During the 1920’s the club won two League Championships, reached the final of the national AFA Senior Cup in four consecutive seasons, winning on two occasions, and made five further Sussex Senior Cup Final appearances albeit with only one success. The following decade did see a further two Senior Cup victories and success at the first attempt in the RUR Charity Cup. Good attendances saw the ‘popular’ Town Hall side of the ground asphalted and a new wooden grandstand erected behind the goal at the Larkin’s Field end. The ground survived World War II in tact with friendly matches regularly being played there. In the summer of 1946 the pitch was moved closer to the cricket ground to facilitate the Town Hall side being terraced - although it was not until 1962 that the Meads Road end section was covered.

Following one post-war season in the Southern Amateur League, the club joined the Corinthian League where they remained until the competition merged with the Athenian League in 1963. In the immediate post-war years the Saffrons attendances averaged 3,000 with the ground record of 7,378 being set when Southern League side Hastings United visited in an F.A. Cup tie on 10th October, 1953. During this era there were further Charity Cup successes, a Sussex Senior Cup win in 1953 and an AFA Invitation Cup success in 1970. After more than eighty years of being known as the ‘town club’, the club’s name was changed to its present form. In March, 1969 the wooden grandstand was destroyed by an arsonist and although ‘temporary’ cover was provided, it was twenty-five years before a replacement was opened; the stand being named in memory of club stalwarts Sid Myall and Taffy Jones.

almost achieved in 2002; however, promotion was won in 2003 when Town finished in second position. On their return to Division One Town achieved were fifth in 2004 and, after two further seasons of consolation, the League Championship was again secured in 2007 and with it came promotion into Division One (South) of the Ryman Isthmian League, the club having only to complete minor works after pursuing an on-going programme of ground improvements.

One of a small number of clubs in Sussex to hold the prestigious F.A. Community Club status; ETFC received a reprieve from relegation in 2010. Subsequently, the club worked hard to retain its place in the Ryman League but a bottom place finish in 2014 saw them relegated to the County League. A spirited attempt to make an immediate return was thwarted when the side failed to reproduce their good early form after a long Falling attendances made it uneconomic to mid-season lay-off and they eventually continue in the Athenian League and in finished fourth but did have the satisfaction 1976 Town resigned, their final match being of lifting the Sussex RUR Charity Cup for the in the League’s Cup Final where they lost 1-2 sixth time moving them to within one away to Cheshunt. Accepted into the Sussex victory of being the fourth most successful County League the newcomers lifted the club in the competition. Last season good Championship at the first attempt and the starts were made in the three senior cup following year reached the final of the competitions but produced no success as Sussex Senior Cup. Thereafter the first they concentrated on their position in the team’s best finishing position was third on league where they were pipped for the title two occasions but generally the trend was by Horsham who made an immediate downwards. The installation of floodlights return to the Ryman League. for season 1994/95 saw a resurgence in results, therefore, it was a shock when after finishing ninth in 2000, a year later they found themselves relegated after dropping ten places and finishing next to bottom. An immediate return to Division One was