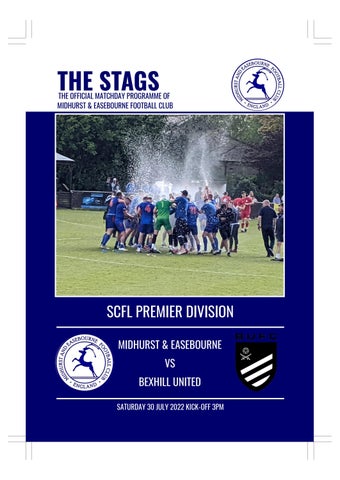 The club has 2 senior teams and 8 youth teams. The First Team are currently members of the Southern Combination Football League and compete in Division 1, whilst the Reserves play in the East Division of the Hampshire Development League. The club was established in 1946 by a merger of Midhurst, whose ground had been used to build a school on, and Easebourne, who had lost several officials and players during the World War II. They joined the West Sussex League and went on to win the title in 1955–56, 1962–63 and 1964–65, as well as the Malcolm Simmonds Memorial Cup in 1959– 60. After the top division was renamed the Premier Division, the club won the league again in 1967–68, the Bareham Cup in 1970–71 and the Malcolm Simmonds Memorial Cup in 1973–74. They won the Premier Division and Malcolm Simmonds Memorial Cup double in 1976–77 and retained the cup the following season, before winning another league and cup double in 1979–80. Although an application to join the Sussex County League was rejected in 1980, they were accepted into the league the following year, becoming members of Division Two.

Good afternoon and welcome back to The Rotherfield.

Pre Season has been a-bit disjointed with us having 3 games cancelled. We’ve got stronger week by week as I would expect I’d like to welcome Ryan his staff,players for but honestly I’d prefer another week. todays game along with their committee Tuesday’s game against Sheerwater was a members and supporters. good test for us against a step 5 side looking Like to extend my welcome to todays match to break into the top 6 of their league with officials. us putting in our best performance of pre season. It’s a very exciting time for the club with all The real positive from pre season is the the ground improvements happening in the youth team have been with us throughout coming months and a return to step 5 after and seeing some of the youth players being a 28 year wait. involved in fixtures, Id like to thank Wayne for his support shown in this as it’s Were in the FA Cup for the first time in the important for the youth lads to see a clubs history, this is a great honour for me to pathway into senior football. lead this club into the worlds greatest cup competition. Squad wise we’ve lost 3 players skipper I was lucky to experience some great days in Harry Farr,Jake Slater have decided to take a my playing career but to manage with 1 of break from football, I can’t thank them both my best mates is something that we’re enough for the loyalty they’ve show to me really looking forward to when it comes over the years. I’m sure we’ve not seen the around. last of them. Will Essai has returned to Petersfield Town I The Southern Combination Premier Division wish him all the best. is going to be exciting for everyone involved, We’ve added 5 players to the squad, all have there’s some very good teams in this league, experience at step 5 or above, we have good most notable for me todays visitors along depth which will be needed at this level. The with Newhaven, these two sides are new additions are all settling in really well, standouts for me on the homework I’ve we’re a very tight group and they need to done. buy into the way we operate. The Rotherfield we need to make a difficult place for visiting teams to come this season. Enjoy the game The group we’ve assembled are really hungry, for many we’re be favourites to get Lemmy relegated but that’s really does give me the extra kick as I love a good under dog. I want everyone to enjoy the season, we’re under no pressure the only presume is what I will be demanding.

KYLE HOLDEN 43 JACK SHONK 43 Bexhill Town Bexhill Football Club was formed in May 1927 through the amalgamation of East Sussex League clubs Bexhill Town and Bexhill United. The new club was admitted into the Sussex County league for the 1927–28 season

alongside Bognor and Haywards Heath, taking the places of Shoreham, Hastings &amp; St Leonards and Allen West from Brighton. In 1946 the club was renamed Bexhill Town and became a sister club to Bexhill Amateur Athletic Club. In 1950 the club changed its name to Bexhill Town Athletic after merging with Bexhill Amateur Athletic Club. They won the league cup in 1955-56, and the following season saw them win their first Sussex County League title.[8] In 1957 -58 they finished as runners-up and won the Sussex Royal Ulster Rifles Charity Cup. The club would go on to win back-toback league titles in 1965–66 and 1966– 67 before finishing as runners-up in 1967– 68. In 1969 the club split from Bexhill Amateur Athletic Club and changed their name to Bexhill Town. They then spent the next twelve seasons in Division One, winning the RUR Cup for a second time in 1973–74, before being relegated to Division Two at the end of the 1980– 81 season, in which they finished bottom of the table. They were relegated again after finishing bottom of Division Two in 1984–85, but were promoted from Division Three at the first attempt as runners-up in the 1985–86 season. After winning Division Two in 1989–90, the club returned to Division One. However, the club were relegated to Division Two again at the end of the 1993–94 season and then to Division Three at the end of the 1997–98 season after finishing bottom of Division Two. In 1999– 2000 they won the Division Three Cup. In 2002 the club merged with Bexhill Amateur Athletic Club again and changed their name to Bexhill United.