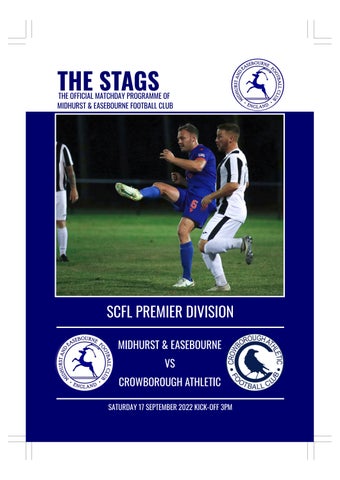 Good Afternoon, welcome back to The Rotherfield. I’d like to welcome today’s visitors Crowborough Athletic for this afternoons Southern Combination Premier game. Like to extend my welcome to today’s match officials. Crowborough Athletic have returned to the Southern Combination League this year after playing the last 8 seasons in the SCEFL. We did cross paths with them in the Sussex Senior Cup before lockdown, it was our last game of that season with us losing on penalties after a 2-2 draw. They’ve started this season very well, I’d expect them in and around it at the business end of the season. Since the Vase game against Greenways we’ve got ourselves in a little rut losing 3 games on the spin, which is very unlike us, we don’t need to panic we just got to get back to what we were doing at the start, for some reason we’ve dropped our standards, it’s fine margins at this level you need to be on it all the time. The lads are a great bunch, I’m certain we’re be back winning again soon enough. People have got to remember where we’ve come from over the last few seasons, want so long ago we were bottom of Division 1. We’re now competing at Step 5 for the first time in 28 years so there will be spells where we loose a few games. If we were offered the start we’ve had along with the cup run at the start I would gof snapped your hand off, so it’s not all bad. Squad wise we got Lewis Hamilton back today, he’s been a massive loss to us. We’re be playing Crowborough away next Saturday in the Vase between that we’re at Alfold Tuesday evening, any support will be appreciated.